Texas Gov. Rick Perry says he rejects the “Obamacare power grab” and will block measures expanding health insurance to millions in his state. The country’s second-biggest health insurer is betting he won’t succeed. 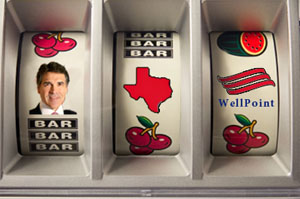 The same day last week that Perry said expanding Medicaid would be like “adding a thousand people to the Titanic,” WellPoint Inc. disclosed an agreement to buy Texas’s biggest Medicaid managed care company for $4.9 billion. The purchase of Amerigroup, which operates in 12 other states besides Texas, is WellPoint’s attempt to cash in on the health act’s addition of 17 million Americans to Medicaid, the state and federal program for the poor.

The Supreme Court decision allowing states to block Medicaid growth without a penalty, however, threatens the profits of companies hoping to manage care for the new beneficiaries. Perry is one of more than half a dozen Republican governors resisting the federal Medicaid windfall set to begin in 2014.

But if there’s one thing more powerful than Republican governors’ dislike of the Affordable Care Act, many believe, it may turn out to be the business interests in their own states.

“Once the headlines die down, every hospital in Texas is going to look at Perry and say, ‘Please tell me why we’re not taking money from the federal government to offset my uncompensated care,'” said Thomas Carroll, who follows health insurance stocks for investment firm Stifel Nicolaus. “That is a question that Rick Perry absolutely cannot answer.”

A higher portion of Texans lack coverage than residents of any other state. A Texas Medicaid expansion would generate $100 billion in federal money for the state over a decade, according to the state Health and Human Services Commission, and furnish coverage to an estimated 2 million Texans.

At the same time it would generate nearly $1 billion in annual Texas revenue for Amerigroup and WellPoint, calculates Carroll.

Quiet for now, insurers are expected to join hospitals and patient advocates to fight for Medicaid expansion and what are enormous amounts of money, even by Washington standards. Nowhere are the dollars bigger than in Perry’s state, where one in four lacks health coverage.

“Fights seem to follow the money, and there is a lot of money at stake in Texas on this,” said Phil King, a Republican state representative from outside Fort Worth who opposes the Medicaid expansion. “Maybe you need to rename this ‘The Full-Employment Act for Lobbyists.'”

With world-renowned medical institutions such as the University of Texas and a large part of its Medicaid coverage handled by private insurers such as Amerigroup, the state’s health industry is “just behind oil and gas” in size and influence, said Vivian Ho, a health economist at Rice University. “Given how much Amerigroup has to gain from a Medicaid expansion in Texas, they may be one of the most effective organizations to lobby Perry and the state legislature to fund the expansion.”

Founded in the mid-1990s in Virginia Beach, Va., Amerigroup contracts with 13 states to manage Medicaid care, generally for a fixed fee per member. Now grown to Fortune 500 size, the company had twice as many Texas members last year — 632,000 — as in any other state.

Amerigroup and merger partner WellPoint both have strong ties to Texas politicians.

Amerigroup’s Texas political action committee donated $20,000 to Perry’s 2010 gubernatorial campaign, has given thousands more to numerous legislators and had $89,000 in the bank as of June 25, public records show. Two years ago Amerigroup’s foundation presented its “Champion for Children” award to Texas Sen. Judith Zaffirini, a Democrat from Laredo who sits in the senate’s Medicaid subcommittee.

An Amerigroup spokeswoman declined to comment on Texas politics. Officials from WellPoint and the Texas Association of Health Plans did not return phone calls.

“In Texas we’re operating fairly low on the pyramid in the hierarchy of needs,” said Anne Dunkelberg, associate director of the Center for Public Policy Priorities in Austin. “If we don’t do the Medicaid expansion we’re going to be leaving somewhere in the neighborhood of 1.5 to 2 million adults without access to affordable coverage.”

Perry and his allies, however, argue that Medicaid is damaged beyond repair. Even though Washington will pay for all of the health act’s Medicaid expansion for three years and eventually 90 percent, they say, the move will prove too expensive for Texas.

“It is such an inefficient system,” said King, who like many Republicans wants Washington to cede control so Texas can design Medicaid to its own needs. “It is exceptionally ridden with fraud, and it doesn’t provide a very high quality of health care.”

But not all Republicans are falling immediately in line with the governor.

“The legislature will be very much involved in the decision making on this,” House Speaker Joe Straus told reporters after emerging from a budget hearing last week. “We will listen to all the stakeholders.”

“We will hold hearings soon to evaluate our options,” said Jane Nelson, chairwoman of the Senate Health and Human Services Committee.

On Thursday, the Texas Health and Human Services Commission slashed estimates of what Medicaid expansion would cost the state by 40 percent, undercutting those who say Texas can’t afford it. The old estimate was $26 billion to $27 billion over a decade; the new one is $15 billion to $16 billion.

The lobbying has only begun. Many believe that Perry and other governors will eventually accept Medicaid expansion, that their stance is only a prelude to bargaining with Washington for flexible terms.

Winning the expansion is “priority one,” said John Hawkins, a lobbyist for the Texas Hospital Association, adding that his group has approached insurers to discuss joint efforts.

WellPoint and Amerigroup, too, seem confident that gubernatorial resistance is only temporary.

“When you step back from all this, there are billions of dollars in federal money that are going to flow to the states,” Amerigroup CEO Jim Carlson told financial analysts on a conference call to discuss the merger. “We think states are going to need to take it.”