Under Gov. Rick Perry’s leadership, Texas will not expand Medicaid eligibility to poor adults. But enrollment in the state’s health program for indigent children and the disabled will still swell in 2014 under new rules created by the federal Affordable Care Act. 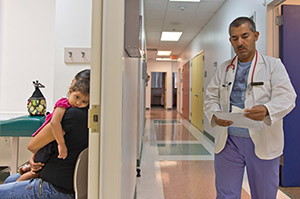 Yesenia Alvarado holds her daughter, Medicaid patient Melanie Almaraz, 2, while waiting to see Dr. Alberto Vasquez for treatment of a fever at the Su Clinica Familiar in Harlingen, Texas on Jul. 9, 2013 (Photo by Eddie Seal).

Texas’ health care provider safety net and the state agency that oversees Medicaid are preparing for the anticipated increase and other challenges that lie ahead.

The Texas Health and Human Services Commission projects 240,000 children currently eligible for Medicaid but not participating will enroll in 2014 and 2015, as families seek coverage to comply with the individual insurance mandate, which takes effect on Jan. 1. An additional 200,000 people could enroll in Medicaid as a result of other new requirements created by the law, according to state health officials.

This presents a challenge for health providers like Su Clinica Familiar in South Texas, which already serves patients who are predominantly uninsured or enrolled in Medicaid.

“As demand comes forward, we’d have to hire doctors, and that could take some time,” said Dr. Elena Marin, the center’s executive director, who estimates that an additional 5,000 patients in her service area could enroll in Medicaid. “If there’s more that are enrolling, then, well, that would be more of a problem.”

Texas has the highest rate of uninsured residents in the nation; nearly 29 percent lacked health coverage in 2012, according to the Gallup-Healthways Well-Being Index.

Although the new federal health law exempts extremely poor individuals from the insurance mandate, millions of uninsured Texans will need to determine whether they qualify for Medicaid or sliding-scale tax subsidies to help them buy coverage.

“We’re going to have one of the more complex systems, unfortunately,” said José E. Camacho, executive director of the Texas Association of Community Health Centers, which represents 71 centers with 350 locations statewide. More than half of the patients served by those centers in 2012 were uninsured.

The majority of those providers are equipped to expand patient capacity by 15 to 20 percent, Camacho said. The greater challenge will be helping poor, uninsured patients determine their coverage options when the mandate takes effect.

Although health centers are receiving state and federal grants to hire staff to help patients apply for Medicaid or tax subsidies, many of the poorest Texans will not qualify for any public assistance.

“Most people really do understand the importance of being insured,” said Cheryl Sproles, the director of community outreach at Su Clinica Familiar. “It’s just going to take us a while to get that message out there.”

The Medicaid enrollment growth set off by the federal health law will leave budget writers in a pinch, costing the state $1.8 billion in 2014 and 2015, according to health commission estimates. That is more than 10 percent of the $17.4 billion the state has budgeted for Medicaid in those years.

More than 75 percent of the state’s 3.7 million Medicaid beneficiaries are children; Texas has strict eligibility rules that provide benefits only to adults who are disabled elderly or extremely poor parents.