This story, which appeared in

, was produced in partnership with 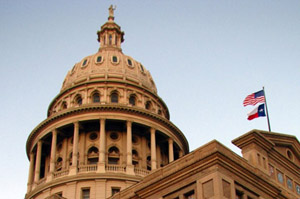 Just a few months ago, Gov. Rick Perry led a group of Texas lawmakers who were threatening to drop out of Medicaid, the state-federal health care program for the poor. A state analysis showing that Texas would lose billions of dollars in financing put an end to talk of opting out.

Now, the debate has shifted, as Texas and other struggling states ask Washington for permission to operate the program as they see fit. Their approach – finding savings by curbing mandatory benefits or limiting eligibility among Medicaid populations – is unlikely to be approved by the Obama administration, which is intent on expanding Medicaid, not shrinking it. And while pressing for a waiver is a far cry from threatening to drop out, it may have the same result: fueling the fire behind Texas’ anti-Washington, state-sovereignty rhetoric.

Texas is hardly the only state pursuing this course; governors across the country are preparing to flood the Department of Health and Human Services with waiver requests. “The feds hold all the power and all the cards here,” said Gov. Mitch Daniels of Indiana, a Republican. “You can expect a whole lot more of this.”

The Obama administration took a small step toward the states’ position this week when it advised Arizona that it would not need a waiver to exclude about 250,000 adults from its Medicaid program – people who were added under special conditions years ago and are not part of the state’s regularly covered Medicaid group.

While many states have received permission to add people to Medicaid over the years, most have not added large numbers, limiting the effect they would see by cutting them. Texas covers slightly more people under Medicaid than federal law requires, meaning that without a waiver, the state could do little to change how it administers the program.

In Texas, Medicaid covers 3.6 million poor, disabled and elderly people, including children, and costs roughly $40 billion per biennium, of which the federal government pays 60 percent.

Texas has pursued a waiver before. In 2008, officials petitioned the Bush administration to redirect some federal hospital money into a Texas pool to help low-income people buy private insurance. The proposal, which was never approved, would have allowed Texas to change Medicaid eligibility levels and start using enrollment caps based on available financing, according to the request.

The difficulty, said Michael Leavitt, who was the secretary of health and human services at the time and is now a health care consultant, was that Texas wanted federal money more than it wanted flexibility.

“At that time,” Mr. Leavitt said, “we were running up against budget constraints, and the administration was not inclined to approve waivers that would increase substantially the outflow from the U.S. Treasury.”

With the state now facing a large budget shortfall, Texas officials want a waiver that gives the state greater flexibility with Medicaid. They want to be able to choose which services to offer, to design eligibility packages tailored to different types of patients, to require Medicaid patients to pay co-pays in emergency rooms so they will see a primary-care doctor instead, and to consolidate Medicaid financing streams now divided by type of care provider. Some are taking an even tougher tack: seeking a federal block grant, effectively a lump sum, to operate Medicaid as Texas sees fit.

“The state puts up almost half of the funding for Medicaid,” said Thomas M. Suehs, executive commissioner of the Texas Health and Human Services Commission. “But we don’t have an equal say in program decisions.”

Ron Pollack, executive director of the consumer group Families USA, said the Obama administration should not allow states to cut enrollment or benefits that are required by federal law. Mr. Pollack said it makes no sense to reduce eligibility leading up to 2014, when an additional 16 million Americans are expected to enroll in Medicaid under the terms of the federal health care overhaul.

The immediate concern for many states is a so-called maintenance of effort provision in the health care law that requires them to maintain current eligibility levels until 2014 or risk losing federal matching money. To complicate matters, federal stimulus financing for Medicaid runs out at the end of June, further cramping states that face a collective budget shortfall of $175 billion through 2013, according to the National Governors Association.

In a recent letter to governors, Kathleen Sebelius, the United States secretary of health and human services, pointed out that the health care law allows states with budget shortfalls to cut adults who are not disabled or pregnant and whose incomes are above 133 percent of the federal poverty level, which is $14,500 for an individual. Ms. Sebelius promised to “expedite review of state ideas” and offered examples of how states could find cost savings in the Medicaid program.

But health care advocates say Texas has few options to save money, because Medicaid benefits here are already so bare-bones that the “optional” services Ms. Sebelius says states could cut are not even offered. And Texas has long since carried out many of the efficiency measures Ms. Sebelius recommends.

Texas officials, who have been strategizing with counterparts in other states on ways to obtain waivers, said they think the Department of Health and Human Services is waiting for direction from Congress before authorizing waivers. Richard Sorian, Ms. Sebelius’s assistant secretary for public affairs, said his boss is planning to announce within the next few weeks new ways for states to get waivers.

But, Mr. Leavitt said, what the agency is talking about is unlikely to provide enough relief to states. The new process would most likely give states fill-in-the-blank templates to make specified changes that are acceptable to the administration, he said.

What states really need, Mr. Leavitt said, is statutory relief from the maintenance of effort requirements, which he expects will be a priority for governors when they meet in Washington the last week in February.

Indeed, Mr. Perry has called on Congress to eliminate those requirements. But Texas wants even more substantive changes in how Medicaid is administered, his office said, including revising the federal formula for financing Medicaid, which is currently built around per capita income. If the formula was based on the percent of the population living in poverty, state officials said, Texas would gain almost $6 billion in federal money a year.

“We need a system that provides for a more market-based health care delivery model that emphasizes individuals sharing in their health care decisions and responsibilities,” said Lucy Nashed, a spokeswoman for Mr. Perry.

And if that help does not come soon? Mr. Leavitt predicts that many states will violate the law and cut eligibility levels anyway. That would place the Obama administration in the tough political position of having to decide how to respond, including whether to withhold federal money from the offending state.