Rose Okoro, a nurse practitioner who specializes in family medicine, opened the Daystar Family Clinic in Katy, Texas, last October. Seven months later, she has only enough patients to work there part time.

It is not because of demand but because of a law that ties the work of nurse practitioners to doctors, said Okoro, who has a doctorate in nursing practice. State regulations do not allow her to be reimbursed by insurance companies unless the physician who supervises her has a contract with those companies. 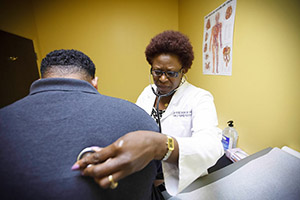 Dr. Rose Okoro is a nurse practitioner who owns Daystar Family Clinic in Katy, Texas. She says she has struggled to treat a greater number of Medicaid patients because of state regulations (Photo by Michael Stravato/Texas Tribune).

“Any approval the collaborating physician does not have, I cannot get — even if I’m qualified,” said Okoro, who has worked as a nurse practitioner for five years and as a registered nurse for 10 years before that. “It’s so frustrating for us to open a clinic and then we’re not able to see everybody.”

Nurse practitioners in Texas have long fought against state regulations that link them financially and professionally to supervising physicians, a construct they say ties their hands and limits their ability to treat patients in a state with a looming shortage of primary care physicians. Texas lawmakers loosened some supervision requirements during the last legislative session following a compromise with physician groups, which argue that nurse practitioners do not have the training or experience to be entirely independent. But nurse practitioners are still battling for increased autonomy in the state Medicaid program.

Texas offers health coverage to poor children and people with disabilities through a managed care system in which private insurance companies contract with the state to enroll patients and cover medical services like doctor visits and prescriptions. Nurse practitioners argue that a bill passed by lawmakers last year should have allowed them to be approved by these state-contracted insurance companies even if their supervising physicians did not treat patients on Medicaid — a growing trend given the low reimbursement rates. But state officials and the physician lobby said that interpretation of the bill was never agreed upon.

“Obviously we have found out that not everyone is in agreement with the language in the bill and what it accomplishes,” said Kathy Hutto, a consultant for the Coalition for Nurses in Advanced Practice. The coalition and another advocacy group, Texas Nurse Practitioners, helped negotiate the terms of the bill.

Stephanie Goodman, a spokeswoman for the state’s Health and Human Services Commission, which oversees Medicaid in Texas, said the bill is “silent on the issue” of whether nurse practitioners could treat Medicaid patients whose insurers had not signed on with the supervising physicians.

“There was a work group put together on the bill in the session, and members of that work group have different memories as to what happened or any decisions that were made,” Goodman said. She added that insurers who participate in the state’s Medicaid program oppose changes to the contractual requirement that the supervising physicians be approved in order for the nurse practitioners to be approved.

Michael Hazel, president of Texas Nurse Practitioners, said the current discord “is just another example of one profession creating unnecessary barriers” for another.

Physicians say the issue is about patient safety, not about creating barriers. They point to the four years of medical school and three years of residency training that primary care physicians must complete after obtaining an undergraduate degree. Nurse practitioners, meanwhile, must complete four years of nursing school and usually two additional years in a graduate-level training program, either through a master’s or doctoral program.

Doctors also say the current “team-based” model — in which doctors who have more comprehensive training partner with nurse practitioners who offer clinic-based treatment — is effective.

The powerful physician advocacy groups involved in the negotiations on last session’s bill, including the Texas Medical Association, which represents more than 47,000 physicians and medical students, and the Texas Academy of Family Physicians, say the Medicaid issue was tabled after an agreement was not reached.

“Any suggestion that we agreed to it is, frankly, a revision to history,” said Dan Finch, director of the medical association’s legislative affairs division. “Having said that, we understand their concerns, and we’re trying to address that.”

After a series of meetings last week, the physician groups have come back to the negotiating table with alternatives to the exemption that nurse practitioners want. The potential solutions offered by the physicians would give nurse practitioners more flexibility when it comes to Medicaid health plans but are designed to maintain the current supervisory relationship.

The nurse practitioners said they were willing to compromise on a temporary fix in order to not delay care for patients, and were waiting for the commission to determine which solution would be adopted. But they insisted that this would serve only as a “patch,” and planned to readdress the issue during the next legislative session.

Beyond issues with Medicaid, they are ultimately pushing for complete independence from doctors as part of a national effort.

They have been successful in several states, including Arizona, Colorado and New Mexico. In Texas, nurse practitioners argue that barriers to their practice of medicine, like the Medicaid requirement, prevent the state from effectively responding to growing primary care needs, particularly in underserved rural communities.

With the next legislative session eight months away — and a growing number of doctors no longer accepting Medicaid patients because of low reimbursement rates and the red tape of filing claims — nurse practitioners are hoping for a fix soon.

“I’m certainly hopeful that we can come up with a solution that allows care to be provided during this interim,” said Hutto, the consultant to the nurse practitioners coalition. “And then if we need to clean up the language next session we can do that.”