In her third year of medical school, Karen Duong found herself on the other side of Texas. She had driven 12 hours north from where she grew up on the Gulf Coast to a panhandle town called Hereford.

“Hereford is known for being the beef capital of the world,” she says, laughing. “There’s definitely more cows than people out there.”

It’s even named after a breed of cattle. Out here, there aren’t many people who provide mental health care. In fact, there aren’t any psychiatrists. That’s the reason Duong went there – she’s studying psychiatry as a medical student at the University of North Texas Health Science Center. This assignment showed her just how severe the state’s mental health care shortage is.

“You have a patient that comes in and they need immediate care or something more acute, and then you tell them that the soonest they can get in for an appointment is six months from now,” Duong says. “It’s not really what we want to tell our patients.”

Hereford is one of many areas in Texas lacking adequate access to mental health care.

Of the 254 counties in Texas, 185 have no psychiatrist, according to Travis Singleton, who tracks physician shortages for Merritt Hawkins, a Texas-based consulting firm. “That’s almost 3.2 million [people],” he says.

The shortage goes beyond Texas. In the past year, Singleton’s firm has been asked to recruit more psychiatrists nationwide than ever before.

“While we knew the demand was high, I don’t think anyone expected it to that extent,” he says.

Supply issues have crept up on psychiatry, Travis says. “You have less and less residents wanting to go in this specialty in genera,l and then you have those that actually do practice medicine not necessarily in the most optimal settings for us.” 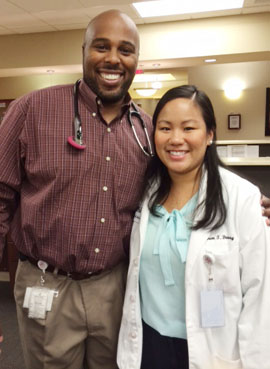 So how do you persuade students to become psychiatrists, social workers and psychologists, and then be willing to work in rural areas?

Republican state Sen. Charles Schwertner is trying cash. He sponsored a law that, starting in 2016, will help around 100 medical health professionals repay loans if they go to work in underserved areas. Schwertner says the investment will pay off.

“Where we don’t have those services for mental health patients, they wind up cycling back through our jails and our emergency rooms,” he says.

There are a number of loan repayment programs for students focused on mental health across the country. They’re “at least somewhat successful,” says Sita Diehl, director of state policy and advocacy with the National Alliance on Mental Illness.

But she doesn’t think they go far enough.

“The most successful strategies are to find young people within the rural community. They know the community, they have an investment in the community,” Diehl says. “Otherwise the turnover rates in these loan repayment programs are pretty high.”

“Even I have some family members who aren’t supportive of me going into psychiatry,” she says. “There are people out there who don’t think mental illness should be considered a diagnosis.”

But Duong says she’s now committed to working in a rural Texas town, despite some sacrifices.

“It doesn’t compare,” she says, “having all these luxuries in a city versus being able to go out there and really make a difference in your patients’ lives.”

This motivation is exactly what Schwertner is looking to spark with the state’s loan repayment program.

This story is part of a reporting partnership with NPR, KERA and Kaiser Health News.