Janet Winston had a rash that wouldn’t go away.

The English professor from Eureka, Calif., always had been sensitive to ingredients in skin creams and cosmetics. This time, however, the antifungal cream she was prescribed to treat her persistent rash seemed to make things worse. Was she allergic to that, too? 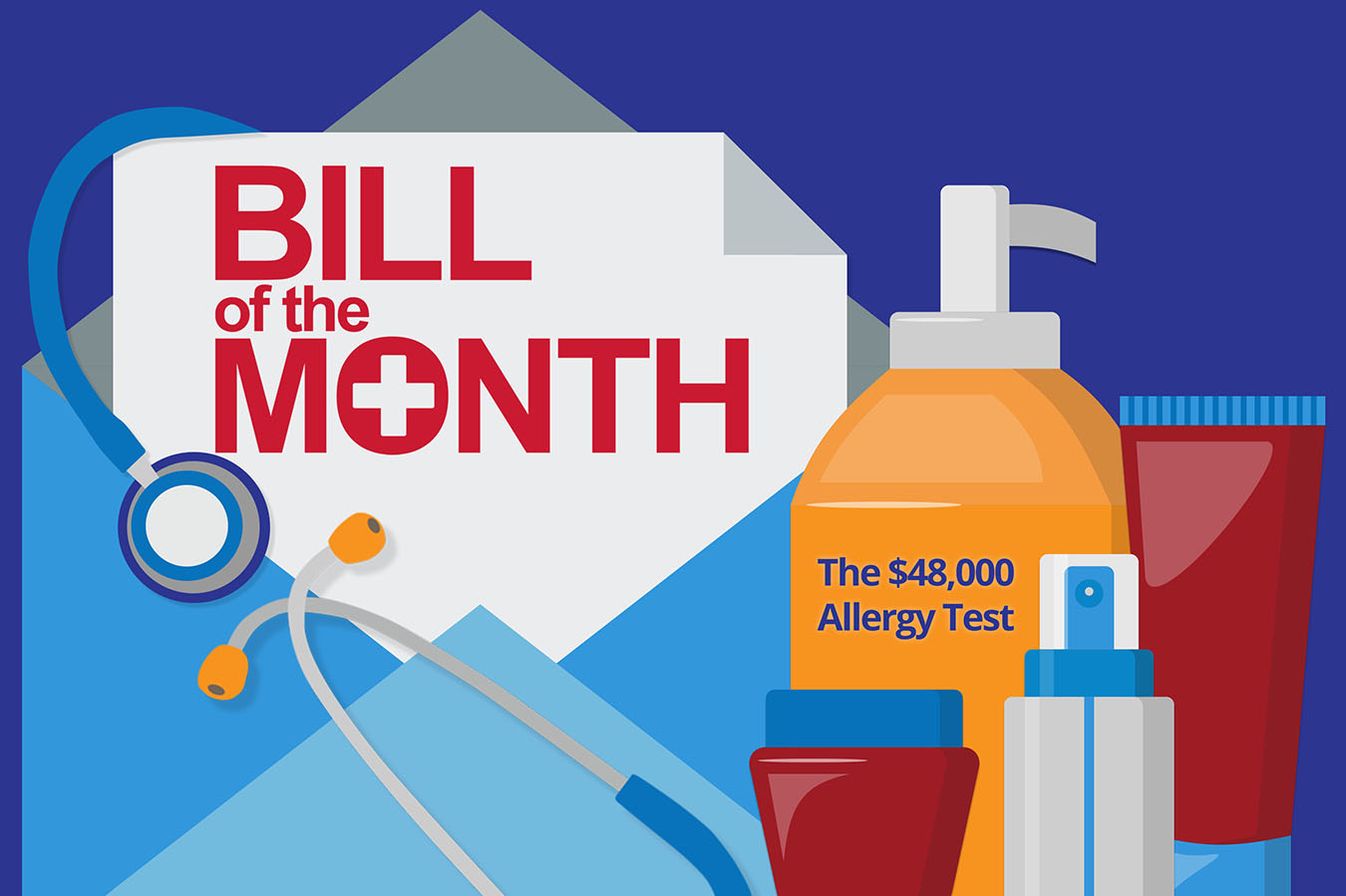 Winston, 56, who works at Humboldt State University, knew the dermatologist in her rural Northern California town was booked months in advance. So, as she often does for specialized treatment, she turned to Stanford Health Care, a nearly six-hour drive south. She hoped to finally clear up her rash and learn what else she might be allergic to — for years, she had avoided lipstick and other skin products.

Winston said that 119 tiny plastic containers of allergens were taped to her back over three days of testing. Winston ultimately learned that she was allergic to — among other things — linalool (a compound of lavender and other plants), the metals gold, nickel and cobalt, the ketoconazole cream prescribed to treat her persistent rash, the antibiotic neomycin, a clothing dye, and a common preservative used in cosmetics.

Her Stanford-affiliated doctor had warned her that the extensive allergy skin-patch testing she needed might be expensive, Winston said, but she wasn’t too worried. After all, Stanford was an in-network provider for her insurer — and her insurance, one of her benefits as an employee of the state of California, always had been reliable. 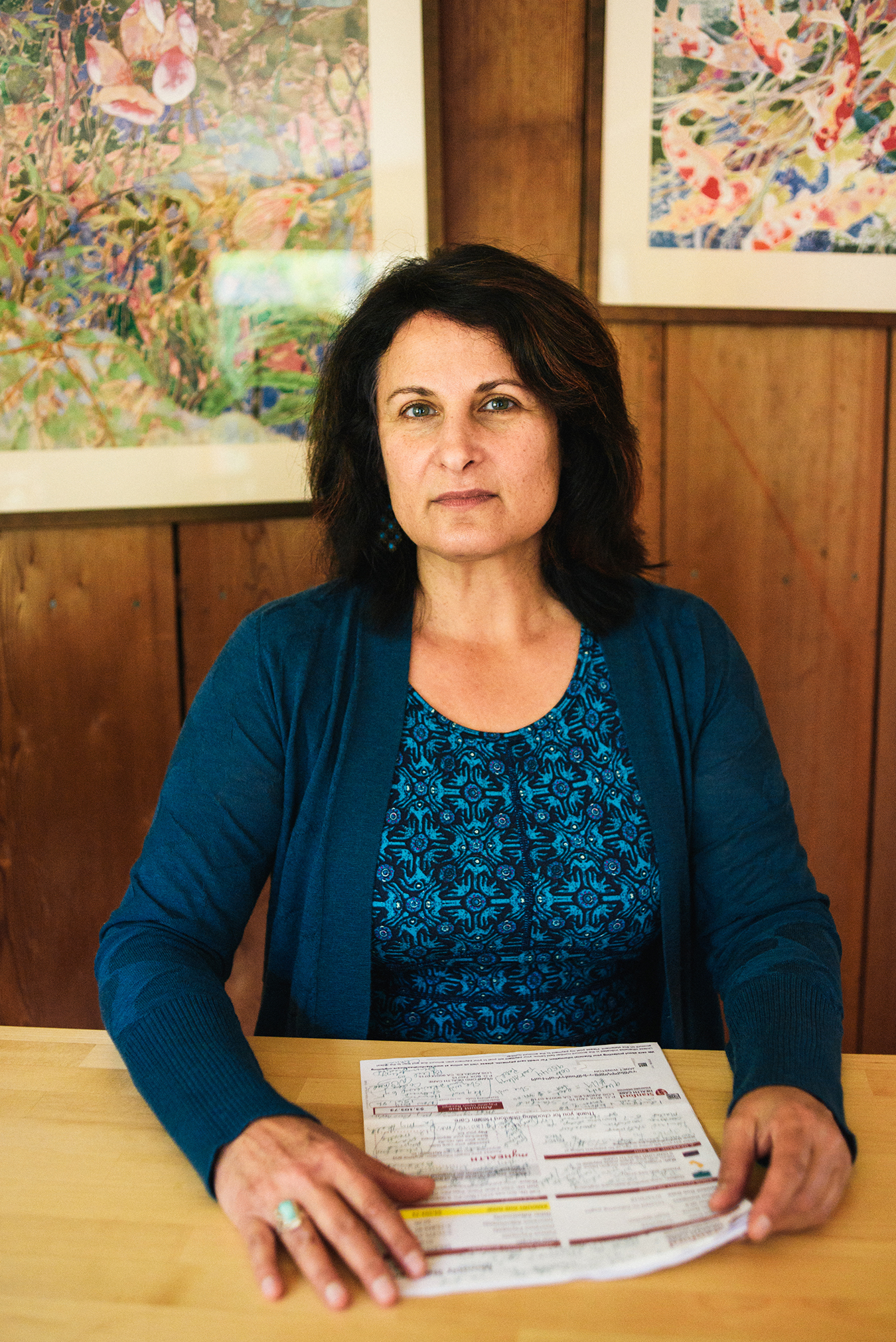 Winston, a professor at Humboldt State University, pores over her bill at home.(Alexandra Hootnick for KHN)

“I was grateful I had such wonderful care at Stanford,” Winston said, “but I was pretty outraged they could charge that. … No one cut into me. No one gave me anesthesia. I had partly open plastic containers filled with fluid taped to my back.”

Stanford’s list price, however, is a whopping $399 per allergen.

“That charge is astronomical and nuts,” said Margaret Skurka, a retired professor of health informatics at Indiana University and a medical coding and billing consultant who advises hospitals and providers. She reviewed Winston’s bill.

The “usual, customary and reasonable” charge for testing a single allergen in the high-cost San Francisco Bay Area is about $35, said Michael Arrigo, a San Francisco-based medical billing expert witness who also reviewed Winston’s bill. “The data seems pretty conclusive that the charges in this case are inflated.”

For the type of allergy skin-patch testing Winston received, the average charge physicians submitted to Medicare — an important data point for private insurers — was about $16 per allergen in 2016, according to Medicare payment data.

An Anthem spokesman noted that one of the insurer’s examiners did review the bill but could not say whether it received extra scrutiny because of its high cost. “We try to strike a balance between protecting affordability and providing a broad network of providers to create choices,” Eric Lail said in an emailed statement.

Winston’s case highlights how some health providers set exorbitant rates, knowing they’ll ultimately be paid a lesser amount. Patients rarely pay these rates — known as “chargemaster” or list prices — and they can generate headlines for the $100 aspirin. But such list prices, as the starting point for negotiations and discounts, do help determine the amounts insurers pay, and ultimately what patients pay as their share of cost.

Stanford Health Care also has a lot of power in dealing with insurers like Anthem Blue Cross. The academic medical system includes hospitals and outpatient clinics across the San Francisco Bay Area as well as a number of large doctor practices in the region. That kind of consolidation and market power can raise health care prices. Insurers in the region have long grappled with Stanford’s high costs, at times withdrawing the health system from their networks. But the breadth and depth of the academic medical system — not to mention its popularity with high-end customers in the Bay Area — makes it difficult for insurers to exclude a powerhouse like Stanford from a network for long. 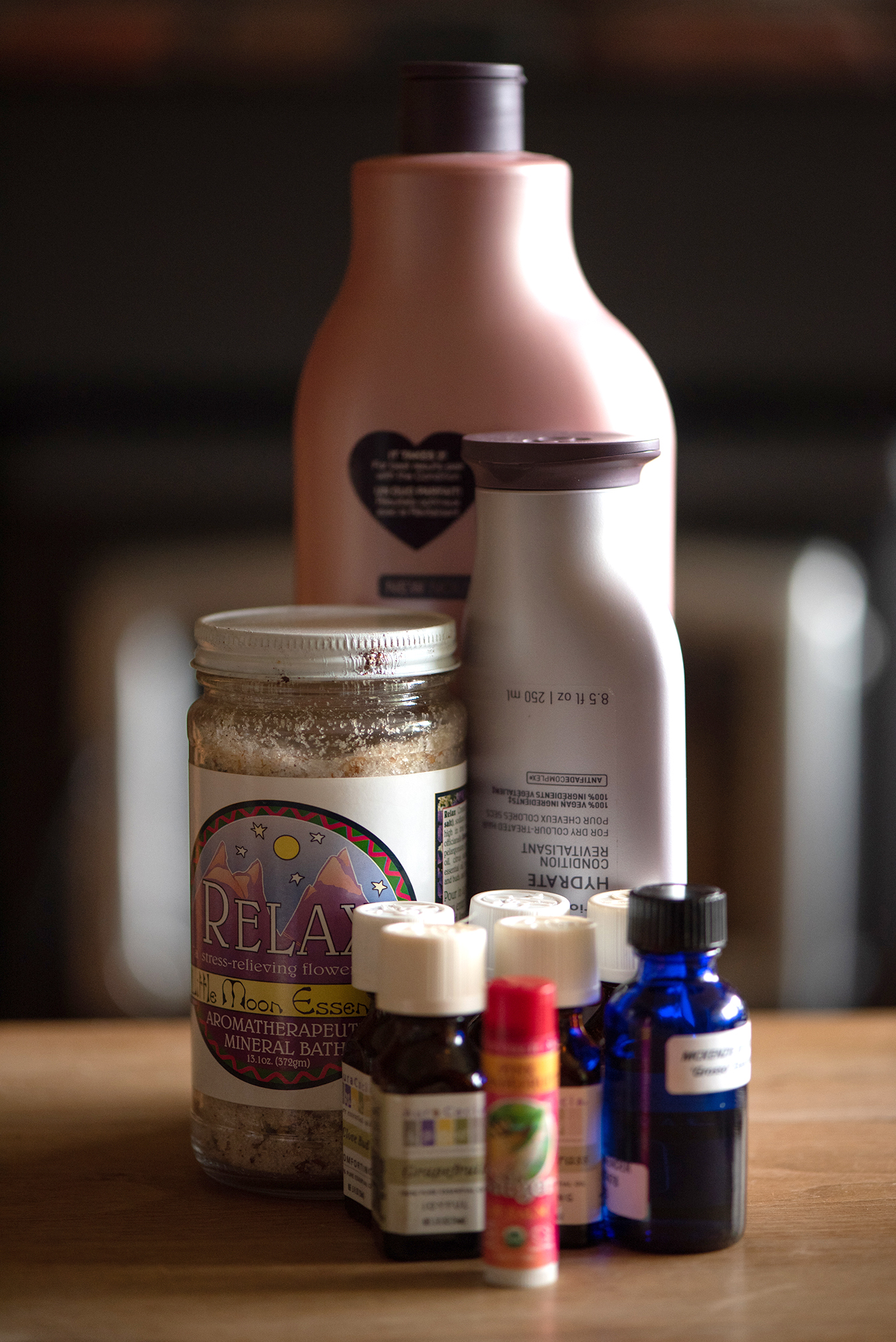 Some of the products that Winston’s allergy skin-patch testing revealed she can no longer use.(Alexandra Hootnick for KHN)

A study recently published in Health Affairs found that such consolidation in California has caused health care costs to spike for both patients and insurers.

Patrick Bartosch, a spokesman for Stanford Health Care, said that Winston’s doctor customized her treatment rather than using off-the-shelf patch tests. The university health system operates a large allergen bank of its own, he said.

“In this case, we conducted a comprehensive evaluation of the patient and her environmental exposures and meticulously selected appropriate allergens, which required obtaining and preparing putative allergens on an individual basis,” Bartosch said in an emailed statement.

“Everyone wants to point fingers at the providers, but … a lot of times [insurers] roll over and pay the rates,” she said.

In other words, Stanford charged Winston’s insurer $48,000 because it could. 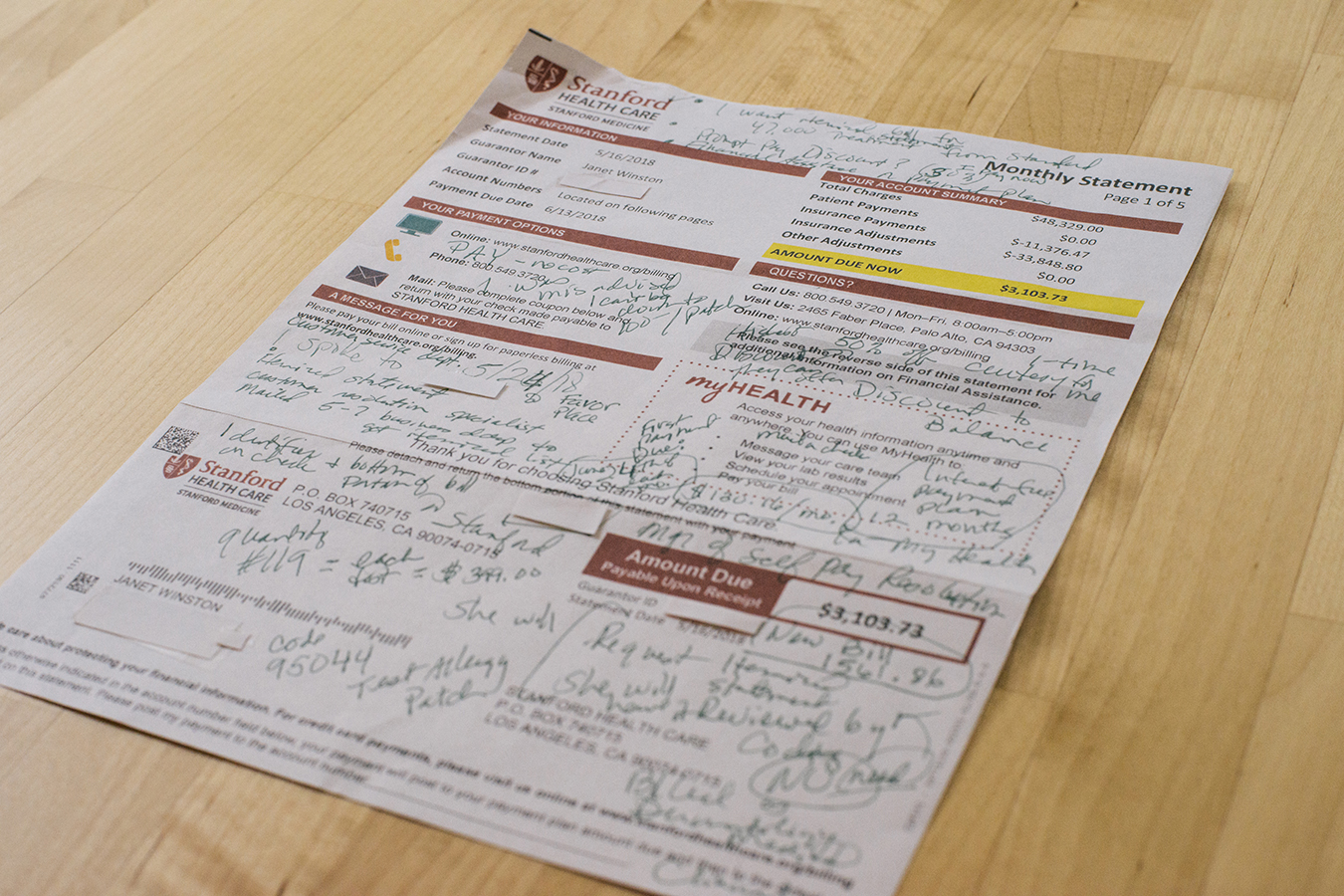 Janet Winston’s original bill from Stanford Health Care. The bill detailed costs of $48,329.00 for allergy skin-patch testing. Winston negotiated her share of the bill down by 50 percent.(Alexandra Hootnick for KHN)

Resolution: After some bargaining with Stanford’s billing department, Winston ultimately paid $1,561.86 out-of-pocket. She made the argument that her doctor had told her the cost per allergen would be about $100, not nearly the $400 Stanford ultimately charged her insurer.

The Takeaway: Insurers often tell patients to “shop around” for the best price and to make sure they choose in-network providers to avoid surprises. Winston did everything right and still got caught out. As a state employee, she had great insurance and Stanford was an in-network provider. Winston said her doctor warned her the test would be expensive, but she never anticipated that could mean close to $50,000. So don’t be afraid to ask for specific numbers: “Expensive” and “cheap” can have hugely different meanings in the high-priced U.S. health system.

Clearly uncomfortable with the charges, Winston’s physician advised her — in advance — to contest it with Stanford’s billing department. So she did, and Stanford gave her a nearly 50 percent discount for her coinsurance share of the bill. It never hurts to ask. 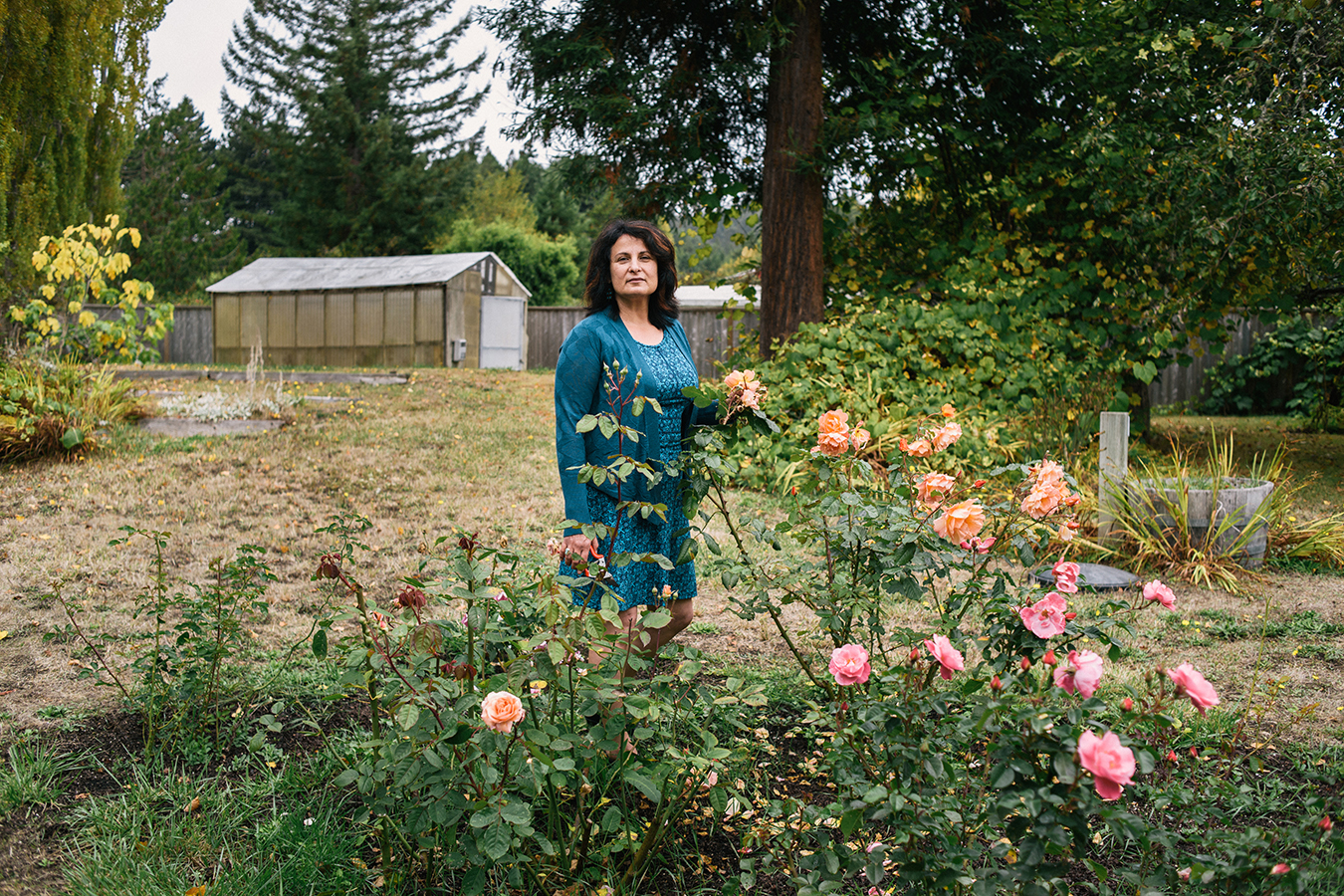 The allergy skin-patch testing Winston underwent revealed she is allergic to numerous metals and other substances, including linalool, a naturally occurring terpene alcohol in many flowers and spice plants. Winston still can handle roses from her garden, which contain linalool, but she cannot wear perfumes and cosmetic products that contain the compound.(Alexandra Hootnick for KHN)

Still, Stanford received more than $12,000 total from Winston and her insurer for allergy patch tests — a cost that is borne by insurance policyholders and taxpayers. Researchers have linked consolidation by Northern California providers such as Stanford and Sutter Health to higher health costs for the region’s consumers. A local health workers union also has taken aim at Stanford’s costs with two city ballot initiatives that attempt to rein in what Stanford and other health providers can charge patients in Palo Alto and Livermore.

“I was grateful I had so much insurance, and that it was in-network, and I could afford the [final] bill,” Winston said. “On the other hand, I thought, ‘How can they get away with this?’ Most Americans could never afford this procedure, at least at this facility, and it made me think about the grand piano in the lobby.”