A Texas hospital that charged a teacher $108,951 for care after a heart attack slashed the bill to $332.29 Thursday — but not before the huge charge sparked a national conversation over what should be done to combat surprise medical bills that afflict a growing number of Americans.

The story of Drew Calver was first reported by Kaiser Health News and NPR on Monday as part of the “Bill of the Month” series, which examines U.S. health care prices and the troubles patients run up against in the $3.5 trillion industry.

More Bills Of The Month

In Calver’s case, the 44-year-old father of two had suffered a heart attack in April 2017 and a neighbor rushed him to the nearest emergency room, which was an out-of-network hospital under his school district health plan. His insurance paid the hospital nearly $56,000 for his four-day hospitalization and procedures to clear his blocked “widow-maker” artery.

But the hospital, St. David’s Medical Center in Austin, wasn’t satisfied with that amount and went after the high school history teacher and swim coach for an additional $109,000 in a practice known as “balance billing.”

Within hours of the story publishing, the hospital offered to waive nearly the entire bill and charge him $782.29 instead. By Thursday, St. David’s lowered the amount even further. Calver said he paid it off over the phone, eager to put this stressful saga behind him.

Calver said it’s a relief that his family doesn’t face a six-figure bill and threatening letters from the hospital’s debt collector. But he said he worries about other patients hit with unjust medical bills of $10,000 or $20,000 who don’t catch the media’s attention.

“It feels great that this is over for me and my family. But this isn’t just about my bill,” Calver said in an interview. “I don’t feel any consumer should have to go through this.”

Calver and his wife, Erin, said they were encouraged by the outpouring of support and attention they received. Drew Calver gave local TV interviews after teaching class and his story was featured on CBS This Morning. The couple said they’re hopeful the national conversation that ensued will lead to changes that help other consumers across the country.

Just after paying off his hospital bill, Calver walked to the school cafeteria Thursday to grab lunch. One of the cafeteria workers approached him and shared that she, too, was facing a huge medical bill from the same Austin hospital. Calver said he plans to follow up with the woman and assist in any way he can.

“This is the next way I can be of help to others,” he said. 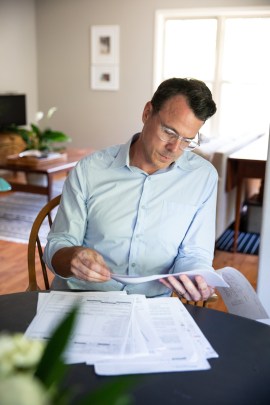 Calver says it’s a relief that his family doesn’t face a six-figure bill and threatening letters from the hospital’s debt collector.(Callie Richmond for KHN)

The hospital system, St. David’s HealthCare, continues to defend its handling of Calver’s bill, saying it “did everything right in this particular situation.” It also pointed out that it informed the family on several occasions that they could apply for a discount through a financial assistance program, based on their household income.

Calver said he didn’t fill out the financial assistance paperwork earlier because he didn’t feel he owed the $108,951 — and had been contesting the validity of the charges all along.

His health plan said the $55,840 it paid the hospital should have satisfied the hospital’s claim. And Calver was already paying $1,400 as coinsurance, which was the out-of-pocket amount calculated by his health plan.

The chief executive of St. David’s HealthCare, C. David Huffstutler, wrote a memo Monday addressed to his board of governors about Calver’s story. A St. David’s employee shared the memo with Kaiser Health News, and the hospital didn’t dispute its accuracy.

“I realize this is not the type of coverage any of us want for St. David’s HealthCare,” Huffstutler wrote in his Aug. 27 memo. “With this story, we had a number of circumstances that made it difficult to neutralize the coverage — a monthly news segment that seeks to empower patients to challenge their medical bills; a gap in the system that is affecting patients … and, a compelling patient story.”

Huffstutler also wrote that the hospital’s charges of $165,000 were “reasonable and customary.” He said that the school district and its health plan administrator, Aetna, chose to offer a narrow network plan that “can potentially place a heavy financial burden on the patient.”

Consumer advocates said the hospital should have erased the bill completely after putting the family through so much stress for months.

The drastic reduction in the bill “shows that these hospital numbers are just made up,” said Bonnie Sheeren, who runs Houston Health Advocacy and assists consumers with their medical bills. “It should be a zero balance, and the hospital should pay for therapy sessions to help this family recover from the billing ordeal.”

But those state rules don’t apply to most U.S. workers because they get their health coverage from employers that are self-insured, meaning the companies pay claims out of their own funds. Federal law governs most of those health plans, and it does not include such protections.

Rep. Lloyd Doggett (D-Texas) heard Calver’s story on the radio while driving Monday and immediately wrote the family a letter offering his support. Calver teaches at the high school that Doggett attended.

The lawmaker proposed legislation last year aimed at limiting surprise billing for patients, but he said it hasn’t received a hearing in the current Congress.

“This is a nationwide problem, and we need a nationwide solution,” Doggett said in an interview. “We have a system where the patient, the most vulnerable person of all those involved, is caught between the insurer and the health care provider. … These problems are solvable.”

Zack Cooper, an associate professor of public health and economics at Yale University, has studied hospital billing practices extensively and said the nearly $109,000 bill was no accident.

He noted that St. David’s, like other hospitals, advertises short wait times for its emergency rooms in order to attract out-of-network patients like Calver. Cooper said his case illustrates the need for better regulation of out-of-network billing at the state or federal level.

“The idea that a hospital would send a bill that will probably bankrupt an individual boggles the mind. For me, that is emblematic of a fairly toxic culture,” Cooper said.

“This was a remarkable story, and it has done remarkable good for him,” Cooper added. “But we shouldn’t be in a world where to avoid financial ruin you have to hope your story is featured in the popular press. We can do better than this.”

Do you have a bill you would like us to examine? Submit it here.

The $109K Heart Attack Bill Is Down To $332. What About Other Surprise Bills?