A bad bout of pneumonia sent Bruce Anderson to Sutter Medical Center in Sacramento last May. As soon as he recovered, hospital staff tried to return him to the nursing home where he had been living for four years.

But the home refused to readmit him, even after being ordered to do so by the state. Nearly nine months later, Anderson, 66, is still in the hospital. 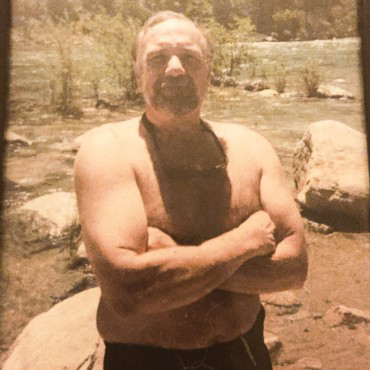 Bruce Anderson about a year before his accident. (Photo courtesy of Sara Anderson)

“I’m frustrated,” said his daughter, Sara Anderson. “You cannot just dump someone in the hospital.”

Anderson said her father, who has a brain injury that causes dementia-like symptoms, is confined to the hospital bed and frequently given anti-psychotic medications. She believes the nursing home, Norwood Pines Alzheimer’s Care Center, refused to readmit him because it wanted to make room for more lucrative and less burdensome residents.

“I didn’t have any question this was about money,” she said.

Bruce Anderson is the victim of a flawed readmission system for patients who want to return to their nursing homes after spending time in the hospital.

Nursing home residents are entitled to hearings under federal law to determine whether they should be readmitted after hospitalization. The state Department of Health Care Services holds the administrative hearings, but has said it is not responsible for enforcing the rulings.

But the state Department of Public Health, which oversees nursing homes, neglects to enforce the rulings and sometimes disagrees with them, according to advocates and court documents.

That leaves residents like Anderson, who won his hearing in July, with little recourse — and not many places to go. And since many nursing home residents have publicly-funded insurance, it means taxpayers are on the hook for hospital stays long after the patients are ready for discharge.

“Federal and state law have created a complicated and expensive process to ensure residents are not abandoned by their nursing homes,” said Tony Chicotel, a staff attorney at the nonprofit California Advocates for Nursing Home Reform. “It fundamentally doesn’t work.” 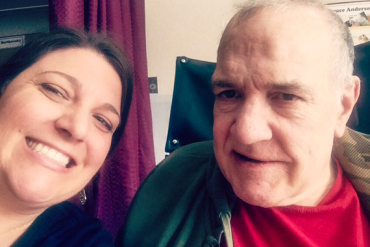 Chicotel said the outcome is “profoundly problematic” — vulnerable residents are abandoned by the nursing homes and then by the state.

Bruce Anderson, two other displaced nursing home residents and California Advocates for Nursing Home Reform are plaintiffs in a pending lawsuit against the California Health and Human Services agency.

Their suit, filed in federal court in San Francisco last November, alleges that the state is violating U.S. laws aimed at protecting nursing home residents from being “dumped” at hospitals. A hearing on the case is scheduled for next month.

Attorney Matthew Borden, who is representing the plaintiffs, said he wants the federal court to require California to establish a hearing process that complies with federal law and to enforce the rulings.

“We are not asking for the moon,” he said. “What is the point of a hearing if no one is going to enforce it? … This illustrates how futile this process is.”

The state’s Health and Human Services agency, which oversees both health departments involved, declined to comment, as did its attorneys at the California Department of Justice.

The defense lawyers filed a motion to dismiss the case, however, arguing that the plaintiffs haven’t presented evidence of a “systemic problem” with regard to residents who are not readmitted to facilities after winning their administrative hearings. 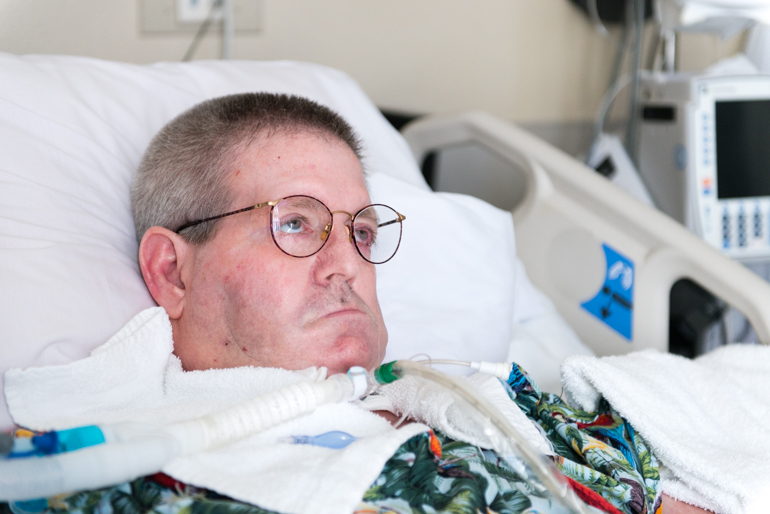 The defense motion also lays out several ways in which state officials could enforce administrative hearing orders, including civil penalties against nursing homes. But Chicotel, of California Advocates for Nursing Home Reform, said the state doesn’t avail itself of  the enforcement mechanisms.

Deborah Pacyna, public affairs director of the California Association of Health Facilities, the trade association for nursing homes, said facilities can’t always take residents back after hospitalization — even if the administrative ruling is in the resident’s favor.

For example, nursing homes are prohibited by law from taking residents if they are dangers to themselves or others — or if the facility can’t provide adequate care for them, Pacyna said.

She said Bruce Anderson did pose a danger — that he had assaulted a staff member and law enforcement officers. The nursing home said in the administrative hearing that it believed Anderson would be better off in a psychiatric facility, according to the ruling.

“This is not about money,” she said. “This is about patient safety … The nursing home has to take into account the safety of the entire population.”

Regardless of motive, the refusal of nursing homes to readmit residents can put hospitals in a difficult situation. Patients can linger in the hospital for a year or more as staff members search for places that can accommodate their serious physical or behavioral needs, said Pat Blaisdell, vice president for the continuum of care at the California Hospital Association. 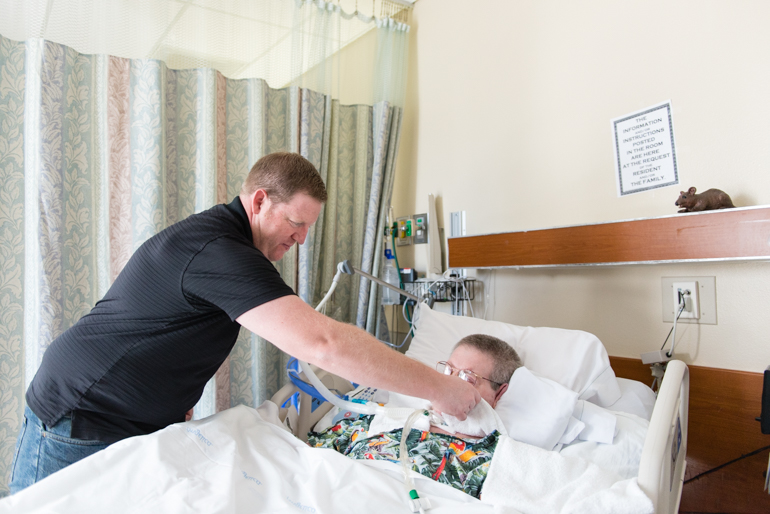 “It’s a major problem,” she said, noting that on any given day there are a few hundred people in hospital beds around the state who shouldn’t be there. That takes up valuable beds, staffing time and money that would be better spent on patients who genuinely need to be there.

Medi-Cal pays hospitals about $400 a day for these patients — far less than what it takes to provide care for them, Blaisdell said. Nursing homes also receive meager reimbursement from Medi-Cal, which Blaisdell said she believes is likely a factor when they decide not to readmit residents.

Whatever the reason, keeping patients hospitalized when they don’t need to be is medically bad for them, she said.

John Wilson, 61, is another one of the other plaintiffs in the lawsuit. He spent seven months at St. John’s Pleasant Valley Hospital in Camarillo after the hospital’s parent company, which owns the skilled nursing unit where he had resided, refused to readmit him to it. Wilson has ALS, a degenerative neurological disorder commonly known as Lou Gehrig’s disease, and he needs a ventilator to breathe. 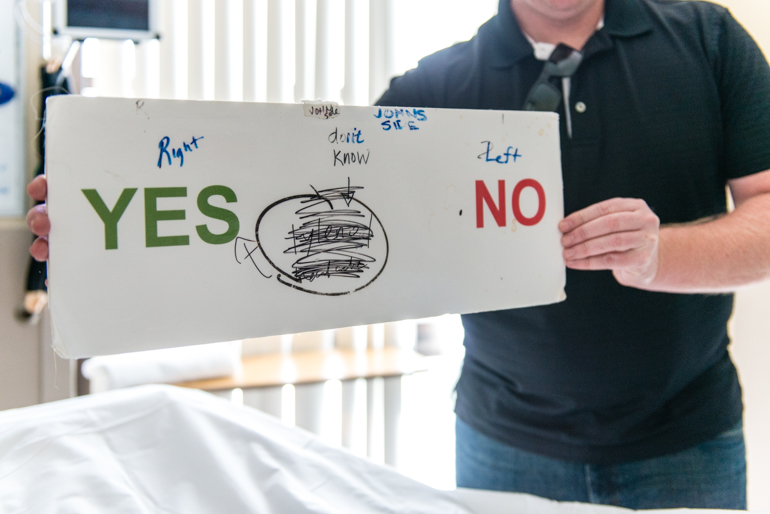 Jeremy Wilson communicates with his father using a makeshift board at St. John’s Pleasant Valley Hospital on February 24, 2016. His father, John Wilson, can’t speak but can communicate using his eyes. (Heidi de Marco/KHN)

Wilson’s son, Jeremy Wilson, said that in the past his father had gone to the hospital frequently for pneumonia, skin infections and other ailments, and each time the skilled nursing unit took him back. But last April, after Wilson got a bacterial infection and ended up in the intensive care unit, a social worker said he would not be accepted back into the nursing facility.

The family appealed the decision, and won its case in an administrative readmission hearing. But the facility still refused to readmit Wilson, his son said.

Jeremy Wilson said he was angry that the nursing home didn’t comply with the order — and that the state didn’t do anything about it. But after he pushed for months, the nursing home finally allowed his father to return, he said.

“He was basically in a jail for seven months,” the son said. “He couldn’t get in a wheelchair and go down into the garden. He was literally stuck in the room, and from a psychological standpoint, it took a great toll on him.”

Sara Anderson said she is still trying to get her father out of Sutter Medical Center in Sacramento. She, too, sees the toll it is taking on him. He has grown weaker and he misses his home at Norwood Pines — and playing bingo with the other residents, she said.

Anderson said the hospital staff is nice to him and he is receiving good care, but he really needs to be in a skilled nursing facility — not an acute care hospital. 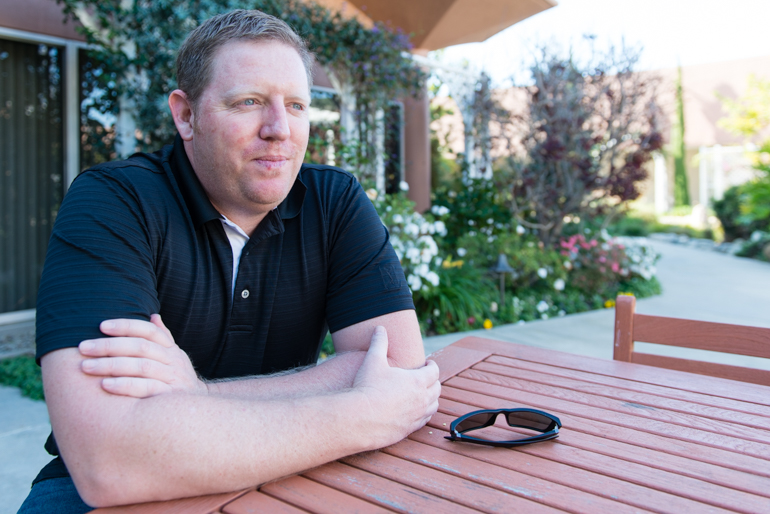 Jeremy Wilson at St. John’s Pleasant Valley Hospital on February 24, 2016. Wilson’s father, John Wilson, a patient at the hospital is a plaintiff in a pending lawsuit against the California Health and Human Services agency. (Heidi de Marco/KHN)

She worries that it still may be a long time before her father is discharged, and that when he is, he will be sent someplace far from her home in San Joaquin County. Finding a place for him is very difficult, she said. “Places do not want to take someone like him … He is a hard sell.”

Beyond her father’s situation, Anderson said she wants the state to fix the way it handles nursing home readmission disputes. “This suit is really for the next family whose loved one gets dumped in the hospital,” she said.