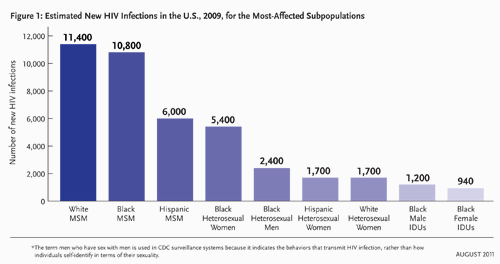 New data from the Centers for Disease Control and Prevention show that while the overall number of people who are infected with HIV each year is relatively steady — approximately 50,000 new infections each year — there was a 48 percent increase in the number of young HIV-infected African American men who have sex with men from 2006 to 2009.

“We are very concerned about this trend for this group and as they age in the future,” said CDC Director Thomas Frieden. Of the 1.2 million people infected with HIV in the U.S., more than 500,000 are black, according to the Kaiser Family Foundation. (KHN is a program of the foundation).

The new numbers, which are published in PLoS One, are able to dissect the spread of HIV across race and gender better than previous data. This multi-year estimate is the first time that the CDC used information from a new test that distinguishes between long-standing or recent infections.

“While we are glad that number [of new infections per year] is not increasing … the number of HIV infections remains far too high,” Frieden said during a telephone briefing today. According to the study, “the largest number of new HIV infections was among white men who have sex with men.”

In a fact sheet, the CDC seemed pessimistic about the future: “The current level of HIV incidence in the United States is likely not sustainable. Prevention efforts in recent years have successfully averted significant increases in new HIV infections, despite the growing number of people living with HIV and AIDS who are able to transmit the virus. However, an analysis by CDC and Johns Hopkins University researchers indicates that the growing population of people with HIV and AIDS will lead to significant increases in new HIV infections if current prevention efforts are not intensified.“

In June, the CDC launched a five-year, targeted-prevention program called “High Impact Prevention,” that will distribute $358.8 million to state and local health departments in just the first year. This month, states and localities are applying for the funding, but each state’s health department will get at least $750,000 to help fund prevention activities.

“We are overhauling how we give out money to states and localities to make sure that we are giving money to where it’s needed most for the populations groups that need it most, for the interventions that are most effective, particularly things like testing linkage to care, availability of low cost simple effective preventions such as condoms,” Frieden said.

Carl Schmid, deputy executive director for the AIDS Institute, a Washington-based national advocacy group, says it’s about time more money gets allocated to prevention. “It’s cost effective,” he said. “It costs a lot more to treat someone who has HIV than it does to prevent the case. … That’s the argument we are using on The Hill.”

Schmid says that consistently, the U.S. allocated only 4 percent of its HIV/AIDS spending on prevention. In May, Schmid testified before Congress, saying, “Preventing all the new 56,000 cases in just one year would [save] an astounding $20 billion in lifetime medical costs.”

The Good, The Bad, And The Costly News On HIV