DES MOINES, Iowa – Broadlawns Medical Center has been serving low-income residents here and the surrounding countryside for decades. And now, there’s a new aspect to its public hospital mission – offering people help to sign up for insurance under the Affordable Care Act. 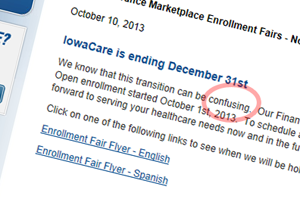 On a recent Saturday morning, Jerrine Sanford came half an hour from the small town of Runnells, Iowa to get her Obamacare questions answered at a hospital event.

Sanford is 47 and out of work because of a back injury. And she says she’s “trying to get involved in everything we need to do so we don’t get fined,” she said. She’s worried about the law’s requirement that everyone have health insurance or pay a fine.

She’s been covered through IowaCare, a program that has been providing some services to people who haven’t been eligible for Medicaid. But as Iowa changes its Medicaid program to include people who previously weren’t covered, IowaCare is ending.

So Sanford wants to know about her options, “where our doctors are gonna be, enrollment fees, if it covers dental coverage, eye coverage, hospitalization.”

With more than 200,000 Iowans lacking health insurance, there are lots of questions but not many people equipped to answer them.

Iowa Insurance Commissioner Nick Gerhart says the state got about $600,000 in federal funding for pay for navigators, who help people understand their options and sign up for coverage.  “That’s not a lot of money to build a statewide campaign,” he notes. “You have to hire staff, train staff, hold events. I mean that’s expensive.”

As of now, Iowa has only about a dozen full-time navigators and a few part-timers – with a lot of ground to cover, according to Gerhart.

“Especially when you think that some of the navigators are going to be working in 60-plus counties. That’s a heavy lift for just a few people, quite frankly,” he says.

One of the organizations spreading the word is Planned Parenthood of the Heartland, which received a $217,000 navigator grant. Kyle Carlson, the director of legal and public policy, says they’re trying to cover a broad swath of southern Iowa, with a “goal to try sign up 2,000 people through our five navigators – so it’s ambitious.”

But at least they’ve got someone there – 27 of Iowa’s 99 counties don’t have a navigator at all.

In those areas, people with questions do have some options: they can turn to insurance agents or certified application counselors like Joe Heitritter.

“There are a lot of people we’re seeing who’ve been uninsured for a lot of years,” he worries. “Just understanding what health insurance is, what premiums and deductibles are are, may be new to some people.”

Heitritter says he and his colleagues have helped several clients narrow down their options, but he doesn’t know of any who’ve finished the signup process yet.

So it’s not easy, even with the resources of a hospital like Broadlawns.

Jerrine Sanford leaves her meeting with a financial counselor with a whole new set of questions. She’d hoped to qualify for Iowa’s new Health and Wellness Plan for low-income patients.

But she’s been told her husband’s disability payments may disqualify her, “because we were over by $60 (per month),” she says, so they’ll have to “wait and see what the decision’s gonna be.”

Sanford says she’s tried to shop for other plans on the federal insurance marketplace. But like so others, she’s struggled to get the website to work. With her current coverage expiring at the end of the year, she’s hoping to have some answers soon.

This story is part of a reporting partnership between NPR and Kaiser Health News. Sarah McCammon is a reporter for Iowa Public Radio.