The students wait eagerly for their teachers to turn their backs.

That’s their cue to reach quietly for a small, sleek device they can easily conceal in their palms. It resembles a flash drive, but instead of computer files, this device stores nicotine.

They take a hit, sucking on the device as they would a cigarette. Then, “they blow into their backpacks … or into their sweater when the teacher isn’t looking,” said Elijah Luna, 16, a sophomore at Vista del Lago High School in Folsom, Calif., about 30 miles east of Sacramento.

The vapor cloud is so small and dissipates so quickly that teachers are usually none the wiser, said Luna, who added he’s never tried it himself.

The device is a Juul, a popular electronic cigarette that’s a sensation among teens, especially in wealthier neighborhoods — and a nightmare for school administrators and public health advocates.

“I think this is going to be the health problem of the decade,” said Milagros Vascones-Gatski, a substance abuse counselor at Yorktown High School in Arlington, Va. In nearly 17 years working with teens, she said, she’s never seen a tobacco product become so popular so quickly. Three to four students are caught smoking e-cigs on campus each week, usually Juuls, and some are suspended, she said.

Vascones-Gatski, along with other concerned educators and health care experts, consider “Juuling” more than youthful rebellion. Because it is high in nicotine, they fear the devices are extremely addictive for this vulnerable population.

To combat the spread of the devices, some schools have banned flash drives as well, to avoid any confusion between the items. Yorktown High even removed the main entrance doors from student bathrooms at the beginning of the school year to dissuade students from vaping inside. Despite these efforts, teens across America continue smoking the stuff in class, in hallways, in restrooms and at school sporting events.

Because it’s referred to as Juuling, not smoking or vaping, some students may think what they’re doing is harmless, said Pamela Ling, a professor at the University of California-San Francisco School of Medicine. “They may not even know it contains nicotine.”

But it does — and a significant amount. One Juul “pod,” the nicotine cartridge inserted into the smoking device and heated, delivers about 200 puffs, about as much nicotine as a pack of cigarettes, according to the product website.

Assuming a teen smokes one pod a week, “in five weeks, that’s like 100 cigarettes,” Ling said. “By that point, you’re considered an established smoker.”

E-cigarettes, also known as vapes, are battery-operated devices that heat up liquid nicotine to generate an aerosol that users inhale. Smoking e-cigs is more discreet and easier to get away with than traditional cigarettes.

In 2016, California increased the minimum age to purchase tobacco products, including e-cigarettes, from 18 to 21. Experts predicted the change would make it harder for teens to get tobacco products from their slightly older friends, and it seems to be working, according to a recent report. 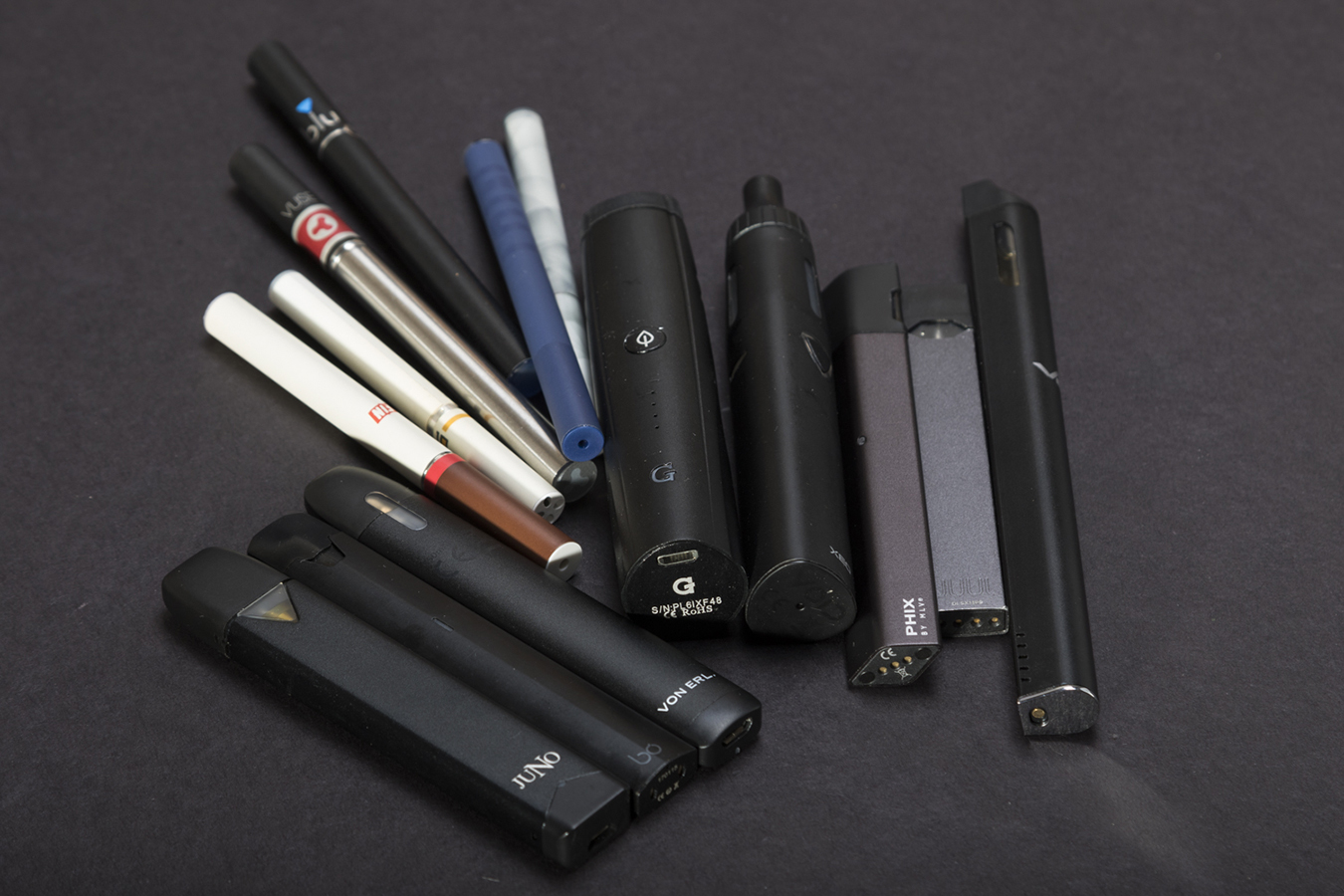 Among this collection of e-cigarettes, Juul is the second from the right. (Sarah Johnson via Flickr)

But some health care advocates now worry that devices like the Juul could reverse that progress.

Although its manufacturer, Juul Labs, said the device is intended exclusively for adult use, it is appealing to youth because it can be easily charged on a laptop, its decal covers come in colorful designs, and the pods are available in flavors such as mango, mint and crème brûlée.

The odor Juuls produce is subtle and could easily be mistaken for a lotion or body spray.

“It’s stinky and fruity,” said Luna’s friend Cody Maratas, of the smell he encounters inside school restrooms when others are Juuling.

In a Reddit forum dedicated to Juuling in schools, some users who identify themselves as students say school restrooms smell much nicer now as a result.

Other online users describe “craving nicotine” and complain about “fiends” who ask to borrow their Juuls at school. One has solved this by charging freshmen $3 for a hit.

An article from Berkeley High School’s student newspaper described students who seek Juuls from others because they “love the head rush.”

Juul Labs said it wants to help schools get its products off their campuses. Spokeswoman Christine Castro said the company has created a curriculum to educate youth about Juul and nicotine addiction, with input from academics. It’s available for any school that is interested, she said.

“This product is solely for adult smokers,” said Castro. “We absolutely condemn kids using our products.”

Castro said the company limits online purchases to individuals 21 or older. To browse the site, you need only click on a box pledging you’re of age. But to buy, you must create a profile. Customer information is verified through multiple databases and, if that fails, customers must upload a photo identification, she said.

However, Castro conceded that it is harder to control sales on third-party sites like eBay or Craigslist.

She urged consumers to report suspicious sales to the company’s youthprevention@juul.com email address. Juul Labs may follow up with secret shopper visits to stores suspected of selling the product to underage customers, she said.

If users get through the age-verification process online, they can buy a Juul starter kit, which includes the vaping pen and four pods, for $50. That’s expensive for most high school students — which is why Juuling might be more prevalent in affluent communities. “In order to vape, you need money,” said Vascones-Gatski, noting that most students at her high school either work or receive big allowances.

Vince Willmore, vice president of communications at the Campaign for Tobacco-Free Kids, applauds efforts taken by schools, but he thinks the burden shouldn’t fall solely on educators and parents. The Food and Drug Administration “regulates tobacco products … and we think it’s important that the FDA take action to protect kids from Juul and other e-cigarettes,” he said.

Last year, the agency delayed regulations that could have yanked many e-cigarette products from the market, possibly including the Juul, while it studies whether these devices might actually help longtime smokers wean off traditional cigarettes. “That basically locked in the products that are in the market for another four years,” Willmore said.

The school has alerted staff “so that when these fall out of students’ bags, teachers don’t hand them back,” he said.

While the hype surrounding Juul might die down, Sicotte doesn’t expect vaping to go away. “I think this is something that will remain in the fabric of adolescence,” he said. “The access is too easy, the draw is too great, and the push through advertising is too significant.”

The Juul’s So Cool, Kids Smoke It In School