This story also ran in

Scott Paul knew he needed to head to the emergency room on a recent Sunday after his foot became so painful he couldn’t walk. The one thing that gave him pause was the thought of having to wait several hours next to a bunch of sick people.

But his wife, Jeannette, remembered she’d seen Dignity Health television commercials featuring a woman sitting in a hospital waiting room and then cutting to the same woman sitting on her living room couch as words come up on the screen: “Wait for the ER from home.”

“I’ve been in emergency rooms before, so I thought I’d see if this worked out,” she said, and went online to book an appointment for her husband at Dignity’s St. Mary’s Medical Center in San Francisco.

“They actually had an appointment that was within the hour. It was fast, it was convenient and there was also immediately confirmation we had the appointment,” she said.

Dignity Health, which runs a large network of hospitals out of its San Francisco headquarters, also offers online ER booking at Saint Francis Memorial Hospital in San Francisco and Sequoia Hospital in Redwood City as a way to overcome the frequently grueling emergency room wait times.

Dignity isn’t the only network employing the strategy. In an era of increased competition driven by the nation’s Affordable Care Act, hospital executives around the country are hoping online appointments will attract patients eager to avoid long waits in a crowded and often chaotic environment.

“It makes for a happier camper,” said Susan Dubuque, a national expert in hospital marketing. “When it comes to health care, consumers want more control over everything.”

Emergency room appointments are not intended for patients with serious emergencies — those with life-threatening, debilitating or urgent medical conditions.

Patients with chest pain, persistent bleeding or trouble breathing, for instance, are instructed to call 911 or go directly to an emergency room. Those with an ankle sprain or a fever, for instance, might be able to make an appointment. 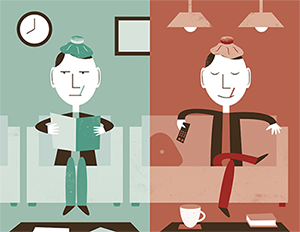 At UCSF Medical Center, patients must explain in an online form the reason for their visit and check a box indicating they can wait for treatment until their scheduled appointment. Even then, they may be bumped by more seriously ill patients, but in most cases they will be seen soon after arrival.

The approach makes business sense for hospitals because it lets medical staff know who may be coming through the emergency room door and helps reduce crowding and decrease wait times, hospital executives say. They say the service also helps build a loyal clientele among patients.

Patients want to access health care the same way they do services in other industries, such as retail or travel, said Chris Song, a spokesman for InQuicker, a Nashville company that offers the online scheduling in California and 25 other states.

“When is the last time someone bought plane tickets at the gate?” he said.

UCSF Medical Center started using InQuicker in its emergency department in 2012 and expanded it a year later to its acute care clinic, where less-critical cases are handled on a same-day, walk-in basis. Now the system is also being used to book primary care appointments.

Under the former way of doing things, Eva Turner, assistant director of ambulatory services for UCSF’s primary care department, said patients were often frustrated because they had no way of knowing in advance if same-day acute-care appointments were still available. “Before (InQuicker), patients would park their car, pay the garage fee only to find out we can’t see them,” she said.

Some critics say the online check-in system may be convenient but is not necessarily cost-effective. It could encourage patients to seek care in the costliest of settings, emergency rooms, when they should be going to less-expensive urgent care centers or medical offices, they say.

If the country wants to decrease health care costs, patients need to be treated at the right place at the right time, said Del Morris, president of the California Academy of Family Physicians. Patients who can make appointments should do so at their doctors’ offices, he said.

“This sounds like it is the most expensive place,” said Morris, medical director of the Stanislaus County Health Services Agency. “Emergency rooms are there to take care of people who have emergencies.”

San Ramon Regional Medical Center began using InQuicker in 2012 and sees about 33 patients a month through the service. Most are people who have sore throats, ear aches and stomach pains, said Sue Micheletti, the hospital’s chief operating officer.

On the Web page where patients can select their time slot, they are given the option of looking for somewhere else for care: “Not an Emergency? Locate an Urgent Care Center near you.”

Patients appreciate the convenience of knowing approximately when they will be seen – and avoiding the emergency room crunch times, she said. “That is worth a lot to them,” she said. “When it rains, it pours. Our emergency room sometimes gets slammed.”

Loma Linda University Medical Center in San Bernardino County, however, stopped using InQuicker after too many patients who hadn’t made the appointments complained that others were walking in the door and being seen ahead of them.

The emergency room physicians liked it, but the nurses got tired of dealing with frustrated patients, said Kathleen Clem, chairwoman of the emergency medicine department.

Under the Affordable Care Act, however, Medicare reimbursements for hospitals are tied to results on patient surveys.

The hospital network, which operates 39 medical centers in three states, began offering online reservations with InQuicker about a year ago. Since then, roughly 12,000 patients have scheduled visits for emergency rooms at hospitals in California, Arizona and Nevada, according to the company.

Bridget Duffy, chief medical officer at Vocera Communications in San Jose and an expert in the patient experience, said streamlining the emergency room experience for patients is necessary, but hospitals need do more.

They also need to assess patients quickly, improve communication with them and better manage their pain. Only then, she said, will hospitals be able to truly improve the patient experience.

For Scott Paul, the San Francisco patient, the emergency-room visit led to an appointment with a podiatrist a couple of days later, where he was fitted with a boot for a stress fracture. His only complaint is that everything happened so quickly he didn’t get a chance to watch the U.S. play Portugal in that afternoon’s World Cup game in the waiting room.

His wife had no such qualms: “We went to the emergency room and they said, ‘We were expecting you.’ ”