Every school day at noon, Karina Garcia drives to her son’s South San Francisco high school to give him a dose of cannabis oil to prevent potentially life-threatening seizures.

But she can’t do it on campus. She has to take Jojo, a 19-year-old with severe epilepsy, off school grounds to squirt the drug into his mouth, then bring him back for his special education classes.

It doesn’t matter that Jojo has a doctor’s note to take the drug, nor that the medication is legal for both medicinal and recreational purposes in California. Marijuana use is strictly forbidden on school sites because it violates federal law.

“To go into the classroom every day and have to grab your child, walk down the block, give them a dose and return them, it’s so disruptive,” said Garcia, 38, who explained that prescription drugs didn’t stop Jojo’s seizures and left him in a zombie-like state. Jojo can’t administer the drug himself because he has developmental disabilities and uses a wheelchair, she said. 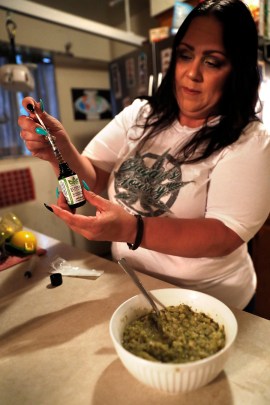 Karina Garcia prepares to administer medical marijuana to her son, JoJo. Prescription drugs didn’t stop his seizures and left him in a zombie-like state, she explains.(Scott Strazzante/The Chronicle)

A growing number of parents and school districts across the country face similar problems as more people turn to medical marijuana to treat their sick children, often after pharmaceutical remedies have failed.

Now, California Gov. Jerry Brown must decide whether to approve a law that would allow parents to administer medical marijuana to their kids at school, setting up a potential showdown with the federal government.

Of the 31 states and Washington, D.C., that have legalized medical marijuana, at least seven have enacted laws or regulations that allow students to use it on school grounds, in part because doing so could risk their federal funding. So far, the federal government has not penalized any of the seven states.

New Jersey, Illinois, Delaware and Colorado permit parents to give their child non-smokable medicinal pot products at school. This summer, Colorado expanded its law to allow school staff to administer the medication. Washington and Florida allow school districts to decide for themselves whether to allow the drug on campuses. And Maine expanded state regulations to permit medical marijuana use at school, according to the Education Commission of the States.

California’s legislation would let school boards decide whether to allow medical cannabis at schools if a child has a doctor’s note. The drug cannot be prescribed because, with limited exceptions, it is illegal under federal law — classified as one that has “no accepted medical use.”

“More lawmakers are acknowledging this is an issue their constituents care about … [and] are trying to address this inherent conflict” between federal and state law, said Paul Armentano, deputy director of NORML, a national marijuana advocacy group.

State Sen. Jerry Hill (D-San Mateo), who wrote the California bill, named it Jojo’s Act after Garcia’s son, who suffers from the severe seizure disorder known as Lennox-Gastaut syndrome. The oil Jojo takes contains the chemical cannabidiol, or CBD, and a trace amount of tetrahydrocannabinol, or THC, both extracted from the marijuana plant.

It’s unclear how many kids use medical marijuana, which is most commonly given to children with autism, seizures or cancer, said Dr. Frank Lucido, a Berkeley doctor who has treated more than 200 kids who suffer from seizures or severe autism.

Some school officials in California say the mere possibility of sanctions is enough to oppose opening up schools to medical pot. At risk are federal funds, including money for school breakfasts and lunches for low-income students, that are contingent on schools being drug-free zones, according to the Association of California School Administrators.

The California bill, SB 1127, which was approved by both houses of the state legislature, landed on Brown’s desk this week for his signature — or veto. It would require that parents or legal guardians administer the medical marijuana, which couldn’t be ingested via smoking or vaping. Nor could it be kept on school grounds; parents would still have to bring the drug to school every day. Traditional prescription drugs, by contrast, are often stored at a school nurse’s office and given by a school employee.

The school administrators’ association argues that staffers would be put in an impossible position if the bill became law.

“We’re asking school administrators and other employees to comply with state and federal laws for everything, except this one time we’re going to turn a blind eye,” Laura Preston, legislative advocate for the school administrators, told lawmakers at a hearing earlier this year.

A different school group, however, is asking lawmakers to back the measure as a way to ensure more kids stay in school.

“As more students have started using it to address their medical issues, it becomes a larger issue for schools,” said Erika Hoffman, legislative advocate for the California School Board Association. “We see this as a step in trying to provide an accessible education for a child who unfortunately has severe medical issues.”

Neurologists and pediatricians say success stories from parents offer patients hope, but they warn that much more research is needed to prove the benefits of medical marijuana. 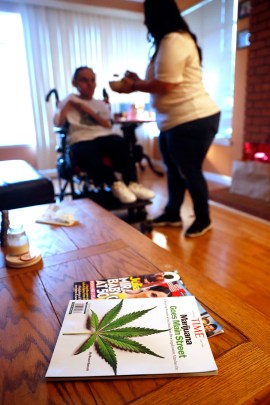 The Food and Drug Administration in June approved the first prescription drug that contains marijuana compounds after studies showed a reduction in the frequency of seizures. The medicine, called Epidiolex, contains cannabidiol, or CBD, and is intended to treat Dravet syndrome and Lennox-Gastaut syndrome.

But Epidiolex is not expected to replace other cannabis products, which are not approved by the FDA. Jojo, for instance, continues to use another formulation of cannabis oil, his mother said.

Lucido, the Berkeley doctor, says his patients often need different combinations of CBD and THC for the treatment to be effective. Children with seizures may require multiple doses of CBD oil a day at regular intervals, he said, and allowing children to take it at school could result in better outcomes.

Medical cannabis, he added, doesn’t make kids intoxicated or sleepy as can many prescription anti-seizure drugs, allowing kids to be more alert in class. In many cases, the marijuana product that kids receive, such as CBD oil, isn’t the kind that gives users of recreational marijuana, which contains significant amounts of THC, a euphoric high.

Critics warn that children might be harmed by drugs that haven’t passed federal health and safety standards. For example, researchers at the University of California-Davis found potentially lethal bacteria and mold on samples of marijuana from 20 Northern California dispensaries two years ago.

“Our concern is the exposure to children of potentially contaminated products,” said Sue Rusche, president of the Atlanta-based National Families in Action, an anti-drug group that says any drug given as medicine ought to be approved by the federal government. “We don’t think they ought to be available to the public.”

Hill, the state senator who introduced California’s bill, said the decision should be left up to state residents.

“The people of California have made it very clear what they want,” he said. “We’re looking at the appropriate balance of that.” 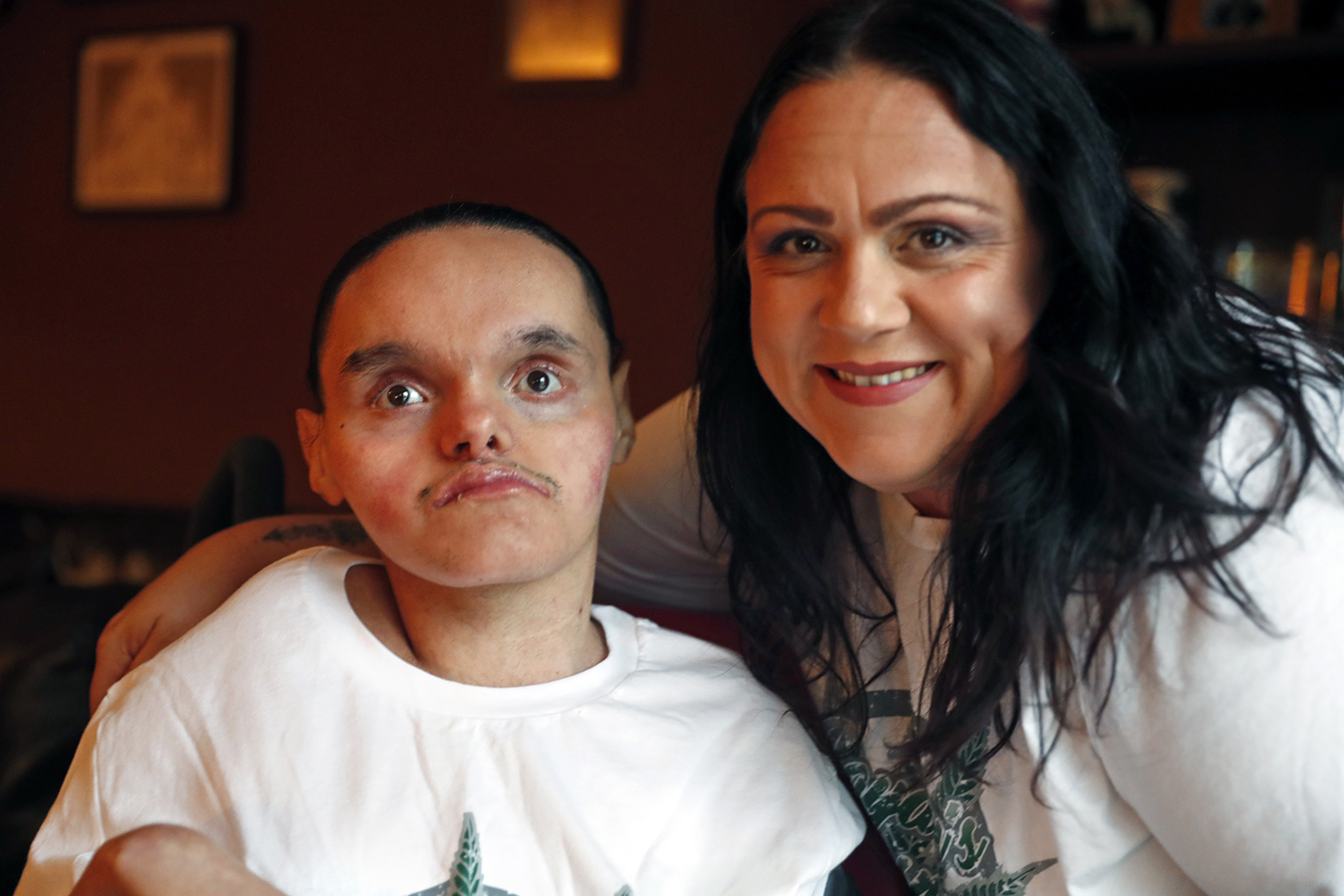 Karina Garcia and her son, JoJo. Jojo can’t administer the medical marijuana himself because of his developmental disabilities, she says.(Scott Strazzante/The Chronicle)

For Garcia, all she wants is the freedom for herself and other parents to come out of the shadows and treat their kids no matter where they are — especially at school.

“When I first started giving him cannabis, I was scared to tell anybody,” Garcia said of Jojo, who as a special needs student can stay in high school until he is 22. “I kept it on the hush-hush. But then, he started improving, and I realized I had to tell people. And my story is not unique.”