Last year, the GOP playbook for keeping the U.S. House in 2014 and winning the Senate consisted of a fairly simple strategy: Run against Obamacare. 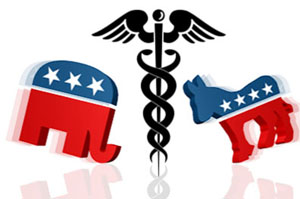 “Republicans are kind of counting on Obamacare to bring them control of Congress in November and I don’t think they should be so confident,” says Dean Clancy, a longtime Republican operative and former vice president of FreedomWorks, a conservative group that supports Tea Party candidates. “It’s much harder now that Obamacare is up and running.”

Chris Jennings, a health policy consultant who worked on the issue in both the Clinton and Obama administrations, agrees.

“I think health reform is now feeling more and more of an issue of the past, and one thing I learned from Bill Clinton is every election is about the future and not the past and what are you going to do to address it,” Jennings says.

Republicans face two key problems using the law as a political cudgel, analysts say. One is that with millions of people now signed up for coverage, making the law go away would result in taking away something tangible for a large and growing group of voters. “So in short order it’s going to be about what you lose as a consequence,” Jennings says.

The second problem is with the back half of what Republicans have continually branded as a “repeal and replace” strategy, says Clancy. “In my 20 years of following health care policy, (Republicans) have never been able to coalesce around en electorally inspiring alternative on health care.”

But the health care issue has not shifted entirely in the Democrats’ favor either. The most recent CNN/ORC poll found only 12 percent of respondents said the health law should be left as it is, while 18 percent said they want it repealed and replaced and 20 percent favored repeal without replacement. But as in most polls, the largest plurality, 49 percent, want the law fixed.

A poll by Politico in the states with the most competitive House and Senate races – those where control of Congress will be decided – found more opposition to the Affordable Care Act. Close to half (48 percent) of those responding said they supported repealing the law. But again, a majority, although just barely (51 percent), said they supported leaving the law intact (16 percent) or changing it without repealing it (35 percent).

That’s led at least some embattled Senate Democrats to try to turn the tables on their Republican opponents, using their states’ failure to expand the Medicaid program against them.

In North Carolina, for example, Sen. Kay Hagan is firing back at her newly minted GOP challenger, State House Speaker Thom Tillis, who led the charge in that state not to expand the program in 2013. “As a result, about 500,000 people who would have qualified for coverage through Medicaid are now not able to do so,” she said last week at a confirmation hearing for Sylvia Mathews Burwell to be the new Secretary of Health and Human Services.

In Louisiana, Democratic Sen. Mary Landrieu is also making Medicaid expansion a major part of her campaign, including fighting for a ballot measure that would let voters decide whether to let more people onto the program. (So far that fight has been unsuccessful.)

That’s necessary in part because Louisiana Gov. Bobby Jindal, seen by many as a possible GOP candidate for president in 2016, remains outspoken – and out front – in calling for repeal of the entire Affordable Care Act.

“The country that won two world wars and put a man on the moon cannot, it is believed, repeal a disastrous public policy,” Jindal wrote in a Fox News column. “Says who? Why not?”

But finding a single alternative could be a near impossible task, Clancy pointed out in a lengthy recent commentary for U.S. News called “Why the GOP is headed for an Obamcare crack-up.”

The problem in a nutshell, he says, is that Republicans are “fundamentally divided between pro-market and pro-business factions” when it comes to health care. While they are rhetorically pro-market, he explains, they are often “functionally pro-business. They talk about patients but they worry about insurers. The special interests – doctors, hospitals, insurance companies – have a huge influence over both political parties. And that makes it difficult for Republicans to come together over truly pro-patient reforms.”

The Politics Of Health In 2014 Aren’t What You Think