Medical school students call this chart the “jaws of death.”

The graph from the Association of American Medical Colleges displays a yawning gap between the increasing number of med school grads looking for residencies and the number of residency slots available to them. 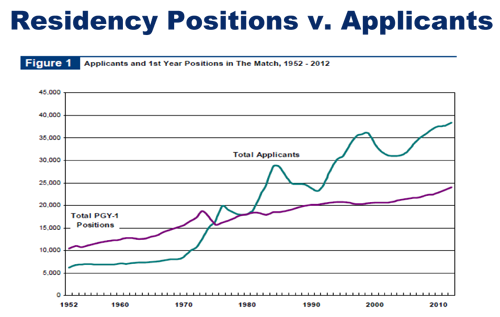 “This is the only time in the history of the U.S. that we are going to see a decrease in practicing physicians,” said Dr. Atul Grover, chief public policy officer of the AAMC, who was speaking on a panel at the American Medical Association’s National Advocacy Conference on Tuesday in Washington, D.C.

Grover said that medical schools have responded to the physician shortage projected by the AMA by increasing admissions, but residency programs have not been able to follow suit.

Graduate medical education, from medical schools to residency programs, is partially subsidized by the government through Medicare, making it vulnerable to cuts to the federal program. Medicare payments cover 21 percent of the cost incurred to train interns and residents, but teaching hospitals absorb the rest. If the scheduled budget cuts from sequestration go into effect next month, some say the physician shortage in the U.S. could go from bad to worse because fewer doctors will complete residency, and thereby, their training.

“It’s a threat — having to go on with our training without knowing if we can complete our career,” said Amy Ho, a third year student at The University Of Texas Southwestern Medical Center in Dallas.

Ho, who was at the AMA conference, said she became involved with AMPAC, a bipartisan political action committee of the AMA to help figure out how to fix this problem.

She said her peers are now tailoring their careers to find the specialties and geographic locations that will result in better pay and lifestyle. But their strategy might not make up for those left without  residency positions on match day.

Thomas Ricketts, a professor of health policy and management at the University of North Carolina at Chapel Hill, said the budget cuts would negatively affect an aging population. He said state governments, health systems, communities and entrepreneurs should join Congress in encouraging medical education.

Meanwhile, the effort to train more physicians has found bipartisan support. Rep. Aaron Schock (R-Ill.) and Rep. Allyson Schwartz  (D-Pa.) introduced a bill to lift the 1997 legislation that capped the number of residency slots available. Their bill would create 15,000 new GME slots around the country.

But without a consensus, the jaws of death will clamp down sooner rather than later.