Rating the best hospitals has become commonplace, with U.S. News, research firms and various Internet sites routinely issuing detailed rankings. Now some health researchers have come up with a way to evaluate which hospitals are the worst. 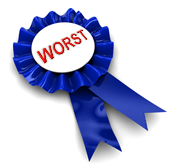 In a new paper for Health Affairs, Ashish Jha, John Orav and Arnold Epstein classified 3,229 hospitals by quality, using Medicare’s reports of how often each hospital followed recommended guidelines of care for basic things like giving heart attack patients aspirin upon admission. Next, the researchers evaluated the hospitals by how much they spent providing care. Combining the two ratings, they identified 178 low-quality, high-cost institutions. With refreshing bluntness, they designated those as the “worst” hospitals.

The researchers found that the worst hospitals had similarities. They tended to be small public hospitals and for-profit institutions in the South. They treated twice as many elderly, black patients as did the 122 “best” hospitals (those with high quality and low cost). The worst hospitals also had many more Medicaid patients than the best.

Being a “worst” hospital had significant implications. Heart attack and pneumonia patients at the worst hospitals were more likely to die than those at the best. (Hospitals that were both low quality and low cost had even higher mortality rates than the low-quality but high-cost “worst” hospitals.)

But if you’re looking for the list of the “worst” hospitals, you will be disappointed:  The researchers didn’t publish the names, a condition of getting the detailed data they needed from Medicare.

But their conclusions carry import as Medicare goes ahead with its plan to change the way it pays hospitals, rewarding those that provide quality care in a cost-effective way, and taking money away from those that provide substandard care at a high price. This approach was required by the Affordable Care Act. But, this study warns, it could end up hurting hospitals that treat lots of poor, black patients, undermining efforts to reduce disparities in care.

“As hospital payments are reduced over time, becoming more efficient while maintaining quality will become even more important,” the study says. “Whether poor-performing hospitals will lose part of their reimbursement — possibly even going out of business as a result — or institute new and effective quality improvement efforts is unclear.”

Things May Get Worse For ‘Worst’ Hospitals, Study Warns