The stereotype of caring for a family member is that it’s so stressful it harms the caregiver’s health. But that’s not necessarily so.

Studies are conflicted, finding that caregiving can harm or help the caregiver. Here’s one on the plus side: A study finds that people who care for a family member live longer than similar people who aren’t caregiving. 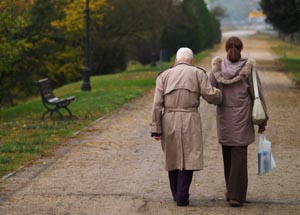 The scientists didn’t ask the caregivers why they might be healthier and presumably happier than similar people who weren’t caring for someone. But the 3,503 people who participated represented a broad swath of the American public and may be a better representation of the caregiving experience overall.

Just 17 percent of the people surveyed said they had high levels of caregiving strain, and the majority put in fewer than 14 hours of care a week.

“The burden of caregiving certainly can be overwhelming and negative to health,” says David Roth, director of the Center on Aging and Health at Johns Hopkins University and lead author of the study, which was published in the American Journal of Epidemiology. “But those are not necessarily the typical experience.”

The study data was originally gathered for a big multiyear study on stroke risk, but the people being cared for in this study had a broad range of health problems. The caregivers themselves were age 64 on average, more likely to be female and either white or African-American.

Family caregivers were 18 percent less likely to die than non-caregivers over six years, the researchers found.

Something must have made life better for the caregivers. But what? To help find out, we called up Leah Eskinazi, director of operations for the Family Caregiver Alliance in San Francisco.

“There are people who find caregiving very rewarding,” Eskinazi told Shots. “They feel really good that they can give back to Mom, for example, because Mom was really there for them when they were growing up. Maybe they weren’t the best kid, but as they’ve aged they can have a more balanced healthier relationship and heal some of those wounds.”

Context is everything, Eskinazi says. Caring for someone with dementia can be more stressful and depressing because the person is facing a long inevitable decline. “You’re caring for someone who can’t voice their preferences,” she says. “You’re making decisions for another person and for yourself, and that can last for a long time. It’s tough.”

But only about 10 percent of family caregivers are tending someone with dementia, other studies have found.

Caring for someone after a stroke, by contrast, can be very positive. “There’s a lot of energy going into helping that person recover,” Eskinazi says.

And in many cases the person being cared for is in a position to be grateful. “To have someone stick by you, or a group of people stick by you, that’s pretty cool,” Eskinazi says. “It gives you an opportunity to say thank you.”

Spouses typically expect to be taking care of their mate in old age, but adult children don’t always prepare for that possibility — or try not to think about it.

But this latest study points out that caregiving isn’t all a big minus for the caregiver — something to prepare for, perhaps, but a normal, often rewarding part of life.

Think All Caregivers Are Unhappy? They’re Really Not