DENVER — Being a doctor in America is changing, in part because of the Affordable Care Act and also because of longer trends in the practice of medicine. Drs. Robert and Michael Sawyer practice at Denver Health, the city’s big public hospital downtown. 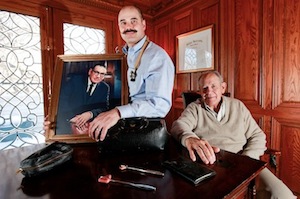 Representing three generations of doctors, Michael Sawyer, 43, center, holds a portrait of his grandfather Ken Sawyer along with his father Robert Sawyer, 80, right, at Michael’s home in Denver (Photo by Barry Gutierrez).

Sawyers have worked or taught here as physicians since the 1930s, so they have a unique perspective on how today’s challenges stack up against those that physicians have faced in the past.

Anesthesiologist Michael Sawyer is 43, and the third generation physician in the family. He and his father, Robert, head up to Mike’s cramped office on the third floor.

Denver Health has never been known as a fancy place, but one that’s always been there for people in need since its log cabin origins in 1860.

Michael’s office has a well-worn futon where he sometimes crashes on long shifts. His office walls are decorated with photos of his father’s father, noted surgeon Ken Sawyer, who died in 1977.

“There’s grandpa,” Michael says, pointing to a black and white profile of a doctor in a gown and surgical mask at work. “Here he is operating at CU [University of Colorado Hospital] a long, long time ago if I’m not mistaken.” Then he points out several mementos he has of his grandfather’s work:  “That’s his doctor bag, actually, and there’s his microscope over there.”

He and his father, Robert, also a surgeon, joke about how Michael uses his grandfather’s desk, much to the chagrin of the facilities managers at Denver Health, who look down on unauthorized furniture.  Michael says he knew pretty early he wanted to be a doctor.

“I remember going to work with Dad, when he’d round, and he’d operate, and I’d sleep in the old surgery lounge,” he recalls.  “It was this cool big, leather couch, in this cool little room with a huge picture of your grandpa on the wall because it was named after him, and you just kind of go, ‘This is what I’m supposed to do.’ ”

Michael is the youngest of seven children and is the only one who became a doctor. He says his father never pushed it as a career.  They both say becoming a doctor is about equal parts you choosing medicine, and medicine choosing you.

“You don’t go into medicine just because your dad’s a doctor,” says Robert. “You go into medicine because it just seems right to you. It’s a fit. Had I thought about going into banking, I’d have gone crazy.”

Robert Sawyer is 80 years old, and still practices one day a week. He also knew early on he wanted to be a doctor.  He watched his father, the guy on the wall, practice when Robert was still a kid.

“This was during the Depression,” he explains.  “People didn’t have much, and it was like they were like part of his family. They’d bring him chickens and eggs and steaks and stuff like that rather than pay him. And some of those people, when he died, kept coming to me.”

Robert says the joy he gets from interacting with patients has been the best part of his career.  But over the decades, he’s watched health care grow ever more complicated and expensive. 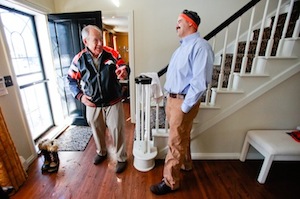 Dr. Robert Sawyer, 80, left, and his son, Dr. Michael Sawyer, 43, greet each other at the front door at Michael’s home in Denver. “I’m very proud of him,” says Bob of his son Michael who is the only one of seven children to become a doctor (Photo by Barry Gutierrez).

“When I started out, there was only one insurance company, and that was Blue Cross Blue Shield,” he says.  “Most of the people you dealt with as a cash basis, and you worked that out.  Then, pretty soon here comes the insurance companies, here comes Medicare and Medicaid, and all of the sudden, the bureaucracy is just overwhelming. You have to ask about what you’re going to do. You have to go get permission to do what you think’s right.  But it was really nice when you could just be able to be a doctor.”

Robert says the bureaucracy frustrates doctors because it distances them from their patients. As Michael was making his way through his training as a doctor, health care bureaucracy and complexity only grew, further reducing the time physicians spend actually practicing medicine.

Being a doctor now is more stressful for other reasons, too. The cost of medical school has skyrocketed. Michael started his career with a six-figure student loan debt that shocks his father. Michael says he doesn’t try to sugarcoat what it takes to become a doctor when he talks with the next generation of Sawyers.

He questions his career choice far more than his father did.  Michael’s wife is a physician, too. He says that while they were still in residency, working crazy hours for low pay under a ton of stress, friends their age had already launched successful careers. 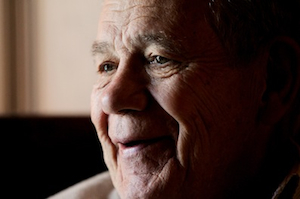 Dr. Robert Sawyer loves medicine so much that, at age 80, he still practices one day a week (Photo by Barry Gutierrez).

“Boy, we could’ve done something else,” he says. “Would we have been as happy? We don’t know. Would we be happier? Who knows? But when you’re in the thick of it, I think I don’t know a doctor my age who doesn’t second guess it.”

But Michael does love being a doctor. He talks about seeing a teenage girl he worked on up and walking around again, after a car accident that nearly killed her.  He says knowing he helped save her life is immeasurably gratifying.

“I’ve always looked at it as … a higher level calling. I think there’s a couple jobs like that, and they would be teachers, and they would be clergy and they would doctors,” Michael says. “And you know that what you’re doing is absolutely good for the world, and it’s a good feeling no matter how exhausted you are.”

But the life and death nature of the work takes a toll, he says.

“I don’t know how many days I’ve gone home after some pretty tragic nights at this hospital and collapsed crying into my wife’s arms because it was really sad what happened the night before, and all you can do is, like, you know, at least you were there trying to help.”

His father gently chimes in, “I don’t know if anybody could say it better than that. It is a calling.”

Stepping out of an elevator and through the hospital’s glass doors, into the cold but cheerful winter sunshine, Michael and Robert Sawyer walk to a small brick courtyard near the entrance where patients and their families can take a break from the noise inside. It’s paved with inscribed bricks, which the hospital sells to raise money. Michael’s kids had a garage sale, and he told them they had to donate half their earnings to charity. His 12-year-old son bought a brick.

“It says ‘Sawyer Family,’ ” Michael reads.  “ ‘Three generations of Denver General/Denver Health Physicians.’ We were trying to go a little bigger, but the kid’s budget couldn’t get much more than that,” he jokes.

“It’s great, we’ll see if we can’t get it to four here going forward,” says Michael.

“That’d be nice,” says his father.

They don’t take it for granted that there will be a physician in the fourth generation of the family, they know exactly how demanding it is. But they also know, no matter how complex medicine becomes, how enormous its bureaucracy grows, and how expensive medical school gets, kids are still going to want to be doctors when they grow up.