For more than a decade, Raymond Ho has answered calls for California’s poison emergency hotline.

One that sticks out came from a panicked mom who feared that she and her child had just eaten a chemical that would give them cancer.

Was it arsenic? Mercury? Asbestos?

The package had a warning in small print that the mother spotted just after snack time. It said the product could expose them to heavy metals known to cause cancer.

Welcome to the world of Proposition 65 warnings, which inspire terror, apathy or confusion among Californians.

Under Proposition 65, California has designated more than 900 substances as toxic, ranging from the seemingly benign aloe vera to the deadly chemical benzene. An unknowable number of products, grocery stores, medical offices, apartment buildings and parking garages that may expose consumers to specific amounts of the substances must post warnings that they are “known to the state of California to cause cancer, birth defects or other reproductive harm.”

Now the state’s expert panel plans to weigh whether to add acetaminophen, an active ingredient in over-the-counter drugs like Tylenol, Midol and DayQuil, to the list.

The discussion about including the most commonly used drug in the U.S. has once again raised questions about the value of Proposition 65 warnings to consumers. Environmental advocates say the law has compelled companies to quietly make their products and emissions less toxic. But some economists who are critical of government regulation argue the law has gone too far, plastering the state with warnings so ubiquitous that they’ve become meaningless to most consumers.

“California overreaches on their warnings,” said Roslyn Chaplin, 42. She was shopping in the snack aisle of a Los Angeles Whole Foods store recently, examining a package of certified organic seaweed with a Proposition 65 warning on it. “I tend to ignore them because there’s not much I can do about it.” 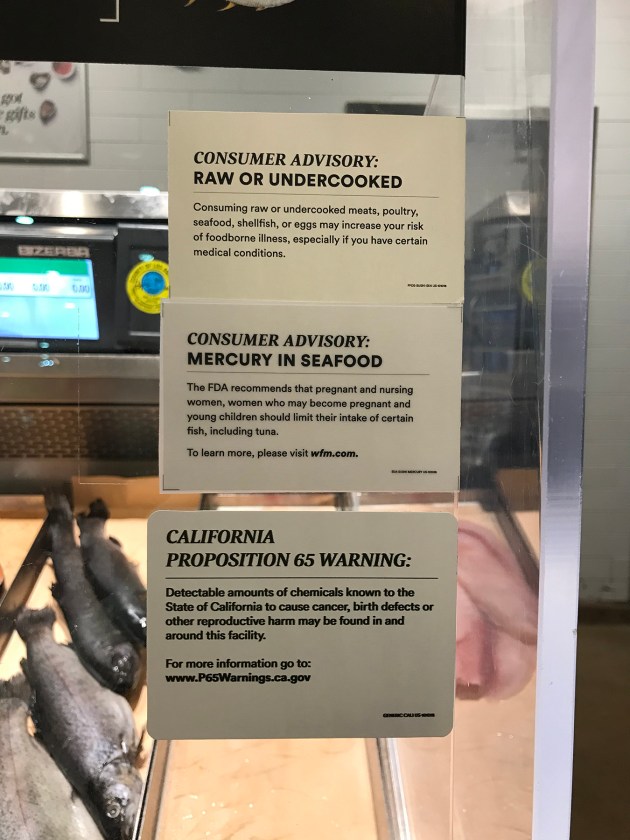 A Proposition 65 label, along with other warnings, is posted on the display case of a Whole Foods seafood counter. The Proposition 65 warning has a website address consumers can visit for more information. (Anna Almendrala/KHN)

California’s Safe Drinking Water and Toxic Enforcement Act of 1986, adopted via Proposition 65, requires businesses with 10 or more employees to warn consumers if using their products may expose them to specific levels of state-identified toxic chemicals.

In addition to food labels, Proposition 65 warnings are posted in buildings where companies or landlords believe employees or residents may be exposed to things like lead and asbestos in construction materials, or car exhaust or pesticides. Some managers and landlords post signs to prevent lawsuits, without verifying chemical exposure.

These warnings attracted nationwide ridicule last year when a judge ruled that cafes needed to warn customers about a chemical in coffee called acrylamide, which occurs naturally during the roasting process. Three months later, the state office that implements Proposition 65 proposed a new regulation that would exempt coffee. It went into effect in October.

No other states have laws that match the sweep of Proposition 65, especially relating to carcinogens, said Doug Farquhar, a spokesman for the National Conference of State Legislatures. Other states require warning labels in limited circumstances, such as Connecticut’s law mandating warnings for products that can expose children to lead.

Acetaminophen, a compound that reduces fever and relieves pain, is an active ingredient in more than 600 over-the-counter and prescription drugs, said Barbara Kochanowski, a senior vice president at the Consumer Healthcare Products Association, a trade group for the over-the-counter drug industry. Acetaminophen has been available over the counter since 1955.

The Carcinogen Identification Committee, an independent panel that advises the state Office of Environmental Health Hazard Assessment, was scheduled to hold a public hearing on Dec. 5 to determine whether evidence shows acetaminophen causes cancer. Instead, it will consider the question in the spring, Sam Delson, spokesman for the state health hazard office, said Thursday.

The postponement will “provide more time and opportunities for public comment and review by the panel members,” he said.

If the panel ultimately decides to add acetaminophen to the list, companies will have 12 months to reformulate their products or use warning labels if exposure poses a health risk.

The possibility of listing acetaminophen has generated a flurry of opposition letters from the pharmaceutical industry, patient advocates and medical groups, as well as the U.S. Food and Drug Administration. Almost all warn that labeling these common medicines could push patients toward riskier painkillers like opioids.

Listing the drug “could prevent consumers from treating their aches and pains,” or it could lead them to try “something stronger and unnecessary,” said state Assemblyman Jim Wood (D-Healdsburg) via email. Wood co-signed an opposition letter with two other legislators.

Dr. Janet Woodcock, director of the FDA’s Center for Drug Evaluation and Research, wrote that evidence does not support a link between acetaminophen and cancer. Therefore, a Proposition 65 warning “would misbrand these products” and be preempted by federal law.

But the state panel doesn’t need to take potential conflicts with the FDA into account, Delson said. If acetaminophen ends up on the toxics list, the office may issue a separate regulation to address the labeling.

Proposition 65’s achievements are likely unknown to most consumers because companies want it that way, Delson said.

“Most companies won’t put out a press release saying, ‘Gee, our product was dangerous, and now it’s not so dangerous,’” Delson said. “They’ll just quietly remove [the chemical] so they don’t have to provide a warning.” 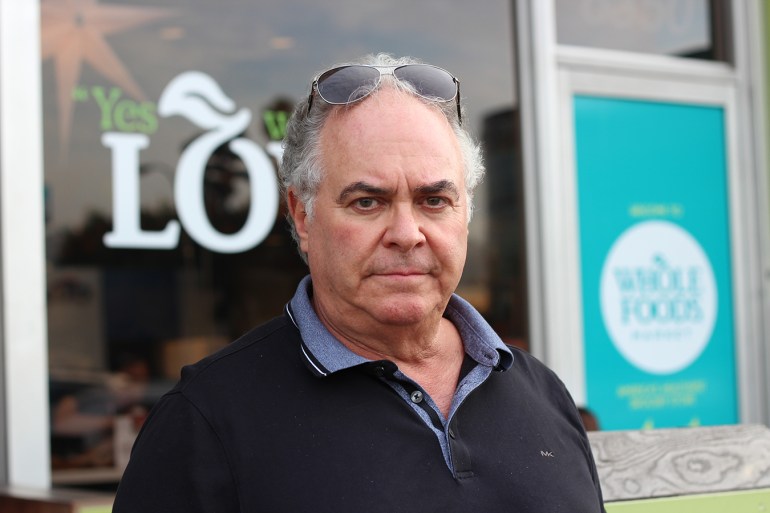 Robert Golden has lived in California for 12 years and has seen Proposition 65 warnings in apartment buildings and museums. The labels put him “on alert,” he says. (Anna Almendrala/KHN) 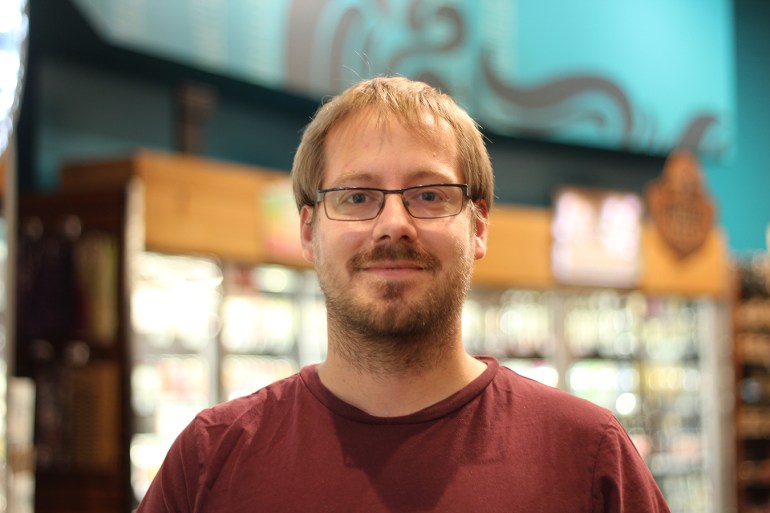 Dennis Svatunek, originally from Austria, has lived in California for 14 months. He noticed Proposition 65 labels on some plants he bought but feels the warnings are so ubiquitous that they have become meaningless. (Anna Almendrala/KHN)

Clifford Rechtschaffen cites the far-reaching removal of lead, an element for which there is no safe level, from products, workplaces and the air. Rechtschaffen, a commissioner on the California Public Utilities Commission, used to work on Proposition 65 litigation as a deputy attorney general.

And despite occasional panicked phone calls to the poison control hotline, Ho thinks Proposition 65 has been a net benefit for consumers.

“I want to know what this product has so I can make an informed decision to decide whether I want to eat it,” he said.

But critics of the law say requiring so many warning labels has bred apathy about disease risk, without influencing consumer purchasing habits or decreasing cancer rates.

“It is a largely useless, ineffective, un-impactful form of warning and disclosure,” said Omri Ben-Shahar, a law professor at the University of Chicago. “It’s just another box of fine print that people are, by now, numb to seeing.”

Michael Marlow, an economics professor at Cal Poly-San Luis Obispo, said there’s no evidence that three decades of Proposition 65 have lowered cancer incidence or raised health literacy. (Marlow has accepted grants from the American Beverage Association and the American Chemistry Council in the past.)

But the law has lined the pockets of lawyers who have made a sport out of suing companies and landlords to enforce the law, Marlow said. From 2000 to 2018, companies have agreed to pay $368 million in Proposition 65 settlements — 68% of which went to attorney fees and costs.

“What has it done other than bring a lot of lawsuits and fund some bounty hunter lawyers?” Marlow said.

On a recent visit to the Whole Foods on Third Street at Fairfax in Los Angeles, Robert Golden said he hasn’t noticed the warning labels on food, but has seen them in apartment lobbies and museums. They have put him “on alert” and he appreciates them, he said.

“They don’t put those things out there unless they’ve got some, I would say, documented proof that there’s been a problem in the past,” said Golden, 66.

But other shoppers simply ignore them.

Dennis Svatunek, a chemist from Austria who has lived in California for 14 months, said he noticed warnings on some plants he bought but doesn’t put much stock in the Proposition 65 signs.

“It’s basically everywhere,” he said. “Therefore, it kind of means nothing.”

This Story Contains A Warning That Might Cause Alarm — Or Apathy