The first health care lawsuit that was decided by an appeals court is now at the doorstep of the Supreme Court. 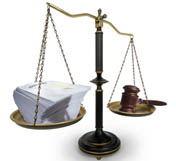 The Thomas More Law Center filed an appeal Wednesday with the high court asking it to overturn the 6th Circuit Court of Appeals June 29 decision upholding the constitutionality of the health law.

“Review is necessary to establish a meaningful limitation on congressional power under the Commerce Clause,” the law center said of its appeal to the high court.

The Cincinnati-based appeals court in a 2-1 decision upheld that the health law was constitutional, because it regulated activity that is economic.

There have been multiple decisions in lower district courts, of which 6 found the law constitutional and 2 found it unconstitutional. (See our lawsuit chart here)

Two appeals courts, the 11th and the 4th, have already heard arguments on the law, and decisions are expected to be issued before the Supreme Court begins its next session in October. If the court decides to hear the cases, it could rule on the constitutionality of the health law before the end of its next term in June 2012.