This story is part of a partnership that includes WBUR, NPR and Kaiser Health News. It can be republished for free. (details)

GOSNOLD, Mass. — Two young men sit in a car outside a church or union hall where they just attended a Narcotics Anonymous meeting. Both men are addicted to heroin. But they haven’t used the drug since they finished a residential treatment program a week or so earlier. 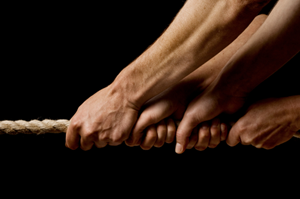 “This happens a lot, there’s the two of us sitting together,” says Jeremy Wurzburg, a thin, pale 21-year-old who became addicted to heroin two years ago.

“We both,” Wurzburg pauses, “we’re not sure whether we’re going to use or not …” That moment, for Wurzburg, could lead right back to his drug of choice, heroin. Most recovery programs, he says, don’t — and maybe can’t — prepare patients in early recovery to fight that urge alone.

“Once I got out of treatment into the real world, it was a big shock,” Wurzburg says.

Of patients addicted to heroin who stop, 40 to 60 percent relapse within the first year. For many it happens soon after finishing a recovery program.

Wurzberg is now in a new young adult recovery program. It’s a one-year pilot project at Gosnold, which runs a network of addiction treatment services on Cape Cod.

Wurzburg agreed to live in a sober house, attend daily 12-step group meetings and get individual counseling. Perhaps most importantly, Wurzburg has help daily, sometimes hourly, from a recovery coach.

“[We show patients] how to manage their emotions, how to fill out job applications, how to go to meetings, how to take care of themselves, how to go back to school,” says Wurzburg’s coach, Kristoph Pydynkowski, who calls himself a “cheerleader, beacon of hope.” Pydynkowski himself has been off heroin for seven years.

“Our job,” Pydynkowski says, “is to replace the old positive feeling about getting high with a new positive trigger point for recovery.” He glances at Wurzburg and smiles. “There is life after drugs.”

Gosnold director Ray Tamasi says this aggressive approach is paying off. Tamasi compared the medical records of 54 18- to 28-year-olds one year before, and one year into, the pilot program. There was an 83 percent reduction in admissions to rehabilitation facilities for the one-year-in group. Emergency room admissions went from 16 to one.

“Think about the cost benefit,” Tamasi says. “If at 19, you’re cycling in and out of treatment, but there’s an alternative — going back to school and living life. … This makes sense economically, and it makes sense simply from the value we place on the human life.”

And it may make more sense than just increasing the number of beds in recovery facilities, he says, “because you can’t just keep people in beds all the time. They have to come out at some point.”

Gov. Deval Patrick’s administration is ready to spend $20 million on two dozen initiatives aimed at curbing a surge in addiction to heroin and other opiates in Massachusetts. A task force report recommended more peer support and home-based counseling. Health insurers and state Medicaid leaders say they will look at funding for recovery coaches, but there is no plan to do so right now.

Across the country, there’s growing interest in using recovery coaches to help heroin users stop, according to Robert Lubran, director of the division of pharmacologic therapies at the federal Substance Abuse and Mental Health Services Administration. At least one state, New York, is paying for coaches to help treat addiction through its Medicaid program.

“This is an evolving field,” Lubran says. “[We are] learning more and more about the best ways to treat addiction.”

The use of coaches is built on the idea that addiction is a disease patients will deal for life.

“We [in the substance abuse community] certainly see addiction to a whole set of substances as a chronic condition,” Lubran says. “There’s a growing body of evidence that it is not an acute condition, so much as a long standing chronic disorder that requires lengthy treatment.”

But that may not be true for all patients.

“Only about 30 percent continue to have problems for years and years,” says Dr. Richard Saitz, chair and professor of community health sciences and medicine at the Boston University School of Public Health. The other 70 percent will have one episode, “which may last for a few years, and then they’ll be in recovery,” says Saitz.

For people with a strong family history of substance abuse, Saitz believes it’s important to call addiction a chronic disease so that it will be treated by primary doctors in a general medical setting, not just in rehabilitation facilities.

These days, when doctors and nurses are often on a budget, and urged to keep patients healthy to save money, they have a financial incentive to consider addiction along with everything that affects a patient’s health.

Meanwhile, Pydynowski is teaching his patients to treat addiction as they would hypertension or diabetes.

“[It’s like] taking insulin, watching my diet, getting my blood work drawn, going to different appointments, walking on the treadmill, making sure I’m taking care of myself,” Pydynkowski says.

Wurzburg is managing his recovery one day at a time and making headway. “I’m just trying to keep doing a little better than I did yesterday,” he says.

To Beat Heroin Addiction, A Turn To Coaches