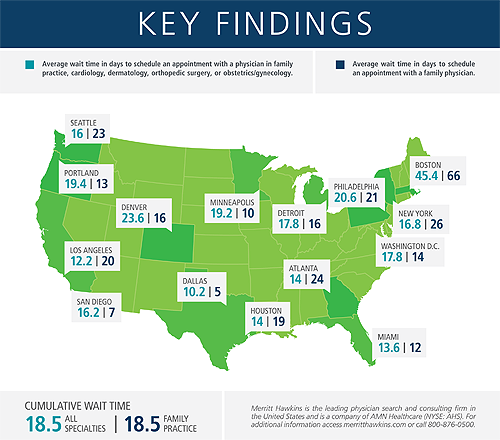 Need to see a doctor? You may have to wait.

A survey of physician practices in 15 metropolitan areas across the country, which was taken before the health law expanded coverage, found that the average wait time for a new patient to see a physician in five medical specialties was 18.5 days.  The longest waits were in Boston, where patients wait an average of 72 days to see a dermatologist and 66 days to see a family doctor. The shortest were in Dallas, where the average wait time is 10.2 days for all specialties, and just 5 days to see a family doctor.

“We have too few providers, which is creating a significant access problem,” says Travis Singleton, senior vice president of Merritt Hawkins in Texas, which conducted the survey. The health care and physician search consulting firm spoke with 1,399 medical offices between June and November 2013 in five different areas of specialization: cardiology, dermatology, obstetrics/gynecology, orthopedic surgery and family practice. Researchers called the practices and asked for the first available appointments for new patients needing routine care, such as a heart check up or a well-woman visit.

The good news is that wait times actually decreased slightly, down from an average of 20.4 days when the survey was last conducted in 2009, and down from 20.9 days in 2004. Singleton attributes the slight improvement to practices employing more midlevel providers like nurse practitioners, better health care IT to help with scheduling and an increase in the number of urgent care centers.

Even Boston, which has eye-popping wait times, has gotten better. The city’s average wait time dropped from nearly 50 days in 2009 to 45.4  days in 2013. That nearly brings it closer to its of about 39 days in 2004 before Massachusetts adopted its version of health care reform.

The rates of Medicaid acceptance are likely to prove problematic as more and more Americans sign up for Medicaid under the Affordable Care Act. “At the end of the day, it doesn’t matter how many physicians you have,” says Singleton. “If no one will take your insurance, you’re going to end in the same place, and that’s probably the ER.”  And with more patients covered both by Medicaid and private insurance, he says, wait times are likely to get worse.

But Ken Hertz of the MGMA Health Care Consulting Group, which consults with physician practices, says wait times don’t always increase in proportion to patient volume. As plan deductibles and copays have gone up in recent years, patient volume in outpatient settings have actually declined, he says.

And long wait times can be attributed to many things other than patient volume, he adds, including operators not understanding the scheduling system. “Most practices are working diligently to see patients and see them in a timely manner, but there are a lot of moving parts,” he says.

“The successful practices will figure out new ways and approaches to shortening wait times. This isn’t going to be acceptable” in the long term, says Hertz.

This post was updated to correct information in the graph about Boston’s overall wait times. The current wait averages 45.4 days, while it was nearly 50 days in 2009 and 39 days in 2004.

To Schedule A Doc Visit, Get In Line