This story is part of a partnership that includes WNYC, NPR and Kaiser Health News. It can be republished for free. (details) Special thanks to WNYC's Data Team.

It was September 2012 and it was life-long smoker Paula Faber’s third cancer in a decade, but she did not hesitate.

“She was going to fight it every inch of the way,” says her husband Ron Faber. 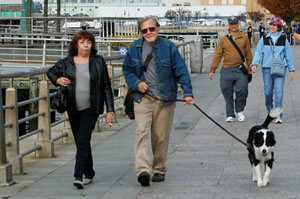 Paula and Ron Faber walk their dog Millie in 2009, between cancer diagnoses. (Photo by Shelley Seccombe)

By August 2013 after much fighting, Paula Faber died at age 72. Ron Faber now regrets the intervening 11 months of chemotherapy, radiation, painkillers and side effects that reduced his wife to 67 pounds of frayed nerves. Instead, the pain could have been managed so she could focus on the quality of life.

“I would have rather have had a really okay four-and-a half months than this endless set of treatments,” the stage actor said.

As they confronted Paula’s terminal diagnosis, the decision the Fabers made is among the most difficult anyone can make. But it turns out that in the New York metropolitan region, patients opt for aggressive treatment much more often than other Americans.

“New York City continues to lag in serious ways with regards to providing patients with the environment that they want at the end of life,” says Dr. David Goodman, who studies end-of-life care at Dartmouth College’s Geisel School of Medicine.

The reasons they do this are many, but most experts agree that it has less to do with the unique characteristics and desires of people in New York and New Jersey than the health care system and culture that has evolved here.

The result: More people dying in the hospital, often in an intensive care unit on a ventilator or feeding tube; more doctor visits leading to tests, treatments and drug prescriptions; and more money being spent by the government, private insurers and patients themselves.

Specialists at the Dartmouth Healthcare Atlas maintain that one of the main drivers of this phenomenon is quantity: people end up in hospitals here so often, they say, because this region simply has a lot of hospital beds.

“One of the truisms of healthcare is that whatever resources are available, or whatever beds are built, they tend to get filled,” Goodman says.

A second driver is that every region has its own medical “culture,” and the one in New York is built around highly trained specialists and sub-specialists who see it as their job to cure illness. Dr. Diane Meier says that means, “that if there’s a cancer it needs chemotherapy, that if there’s heart failure, it needs a procedure.”

She says also driving the culture of heavy treatment is the high proportion of specialists and sub-specialists who constantly refer patients to each other — both because that is how they were trained and because it is good for business.

More and more, though, hospitals are getting a single payment from commercial and government insurers for each patient and losing money when treatments and tests pile up. Meier says hospital care needs to adapt.

At Mt. Sinai, the chair of surgery now demands his staff discuss hospice alternatives with terminally ill patients — and make an electronic note of the conversation that can be tracked. If it does not happen, he demands to know why. Meier said every hospital doctor should follow this example.

“All of medicine needs to be willing to say, ‘Why did this person with end-stage dementia have three or four hospitalizations in the last three months of life and die in the intensive care unit? This was a terrible experience for the patient and family. A lot of unnecessary suffering. Over a million dollars cost to the taxpayer. How did that happen?’ ” she says.

A year after his wife Paula died, he still believes her oncologist at Beth Israel Hospital was strangely optimistic about her prospects. Faber acknowledges it was Paula’s decision to fight the cancer “every inch of the way,” but he thinks she might not have, if her doctors had told her more about the upsides of palliative care and the downsides of aggressive treatment.

“I think they sold her on it,” he says. “She was so afraid of death that she was ready to buy, and they knew it. And I think it happens a lot.”

Hospice had come up before as an option, but the Fabers thought of that only as a place to go and die, and no one had told them otherwise. Then a social worker explained that hospice is something that can happen at home, too. Belatedly, Faber said, the couple chose that option, and hospice workers from the Visiting Nurse Service of New York came to their apartment in Greenwich Village.

“Once they arrived, it was like putting everything together,” he said. “And from that moment on, everything was right.”

It turned out to be the Fabers’ final five days together, after almost 50 years.

Too Many People Die In Hospital Instead Of Home. Here’s Why.