Beth Israel Deaconess Medical Center is a highly regarded teaching hospital in Boston, but in 2012, the hospital found out it had one of the highest rates of readmissions among Medicare patients in the country. That meant federal fines of more than $1 million—and a lot of soul searching for the staff, says Dr. Julius Yang, the head of quality for the hospital.

“Patients coming to our hospital, getting what we believed was high quality care, were coming back at an alarmingly high rate,” says Yang.

The hospital was providing quality care to patients when they were in the hospital, but it turned out that focus was too narrow, says Yang. 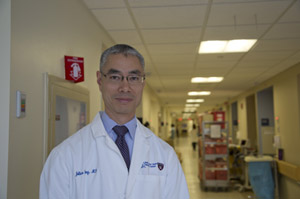 Lila Gross, 84, is one of those complex patients, suffering from heart, lung and kidney problems. Gross frequently ended up in the hospital, and her daughter Geri Segel says the family always left with unanswered questions.

“She would check out of the hospital and there was no one who followed through,” says Segel. “We had a hundred questions and we had to wait for the next catastrophe to get her back in the hospital to find more answers.”

Now Lila Gross is one of 2,000 Medicare patients who is treated in Beth Israel Deaconess’ PACT program. The idea behind the program, which stands for Post-Acute Care Transitions, is to keep Medicare patients from bouncing in and out of the hospital. Studies show that about 30 percent of elderly patients return to the hospital within 30 days of being discharged.

With a $5 million federal grant, PACT nurses and pharmacists now track Medicare patients who are at high risk for readmission. Nurses call patients and their caregivers, communicate with a patient’s primary care provider and arrange for rehabilitation or visiting nurses. Pharmacists are also on hand to answer medication questions.

Siegel says having PACT nurse Susan Sorlien as an advocate for her mother means the family now knows when they should bring their mother into the hospital and when it can be avoided.

So far Beth Israel Deaconess has reduced its readmission rate by 25 percent and its fines have also been reduced. According to Yang, who directs the PACT program, the hospital is now providing better care for its older patients. But there’s a catch, he says, because the hospital loses money for every bed it keeps empty.
“For a patient to come into the hospital, whether it’s a readmission or not, we collect revenue and yet we are being penalized for this,” he says.

The attempt to control costs under Obamacare focuses on hospitals because hospitals are expensive, says Ashish Jha, a professor at the Harvard School of Public Health. But the new readmissions policy alone is not enough to bring down those high hospital costs, he says.

“The problems with policies like these is that they are piecemeal, they are fragmented and they are little band aids,” says Jha. “I think we need a much more comprehensive approach to how we pay for healthcare.”

This story is part of a collaboration between Kaiser Health News and the WBUR-NPR show Here & Now.

It's Not Just Insulin: Lawmakers Focus on Price of One Drug, While Others Rise Too