A California bill that would allow parents to opt out of mandatory school vaccinations for their children only if they have a medical condition that justifies an exemption was endorsed by a state Senate committee but still has a long, controversial path before becoming law. The bill was introduced in the California Senate in response to a measles outbreak at Disneyland in late December that’s now linked to almost 150 infections.

With several hundred protesters outside the Capitol building in Sacramento Wednesday, the bill sparked a debate about individual rights and responsibilities.

Vaccine opponents, who have been relatively quiet during the measles outbreak, turned out in force. They wore American flags, and one child held a sign that said, “Force my veggies, not vaccines.” The opponents say eliminating California’s current exemption that allows parents to refuse vaccinations for their children based on personal beliefs will threaten their ability to do what’s right for their kids.

“I think that everybody should be able to make their own choice,” said Lisa Cadrain of Los Angeles, who fears vaccines would harm her daughter. “I am afraid that her big beautiful blue eyes will not focus on me anymore, and she won’t be the kid that she is.” 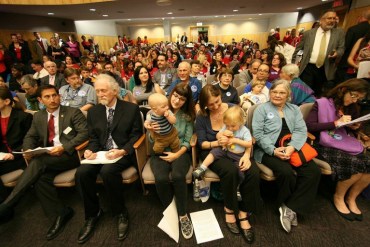 Anti-vaccine protesters gathered inside a hearing room in the Capitol building in Sacramento Wednesday, but the bill that would make it harder to opt out of immunizations passed the state Senate health committee. (Photo by Pauline Bartolone/Capital Public Radio)

Some opponents fear that the vaccinations are linked to an increase in the number of cases of autism in the country, but scientific studies show no link between vaccines and autism spectrum disorder.

Inside the hearing, parents who support the bill also talked about protecting their kids — from children who aren’t vaccinated. Democratic state Sen. Lois Wolk is on the Senate Health Committee and said she’s a strong proponent of vaccinations.

“Our individual rights aren’t without limits, and in this particular case, your insistence on your right really could harm my children or my grandchildren,” Wolk said.

Parents also testified in support of the bill, including Ariel Loop, whose baby son Mobius contracted measles in the Disneyland outbreak. Now 7 months old, he was too young to be inoculated when he was exposed to the virus.

“I understand being skeptical and wanting to research and do what’s best for your child,” Loop said. “I had actually looked into the alternate [vaccination] schedules myself. But there’s no science in support of it, and I’ve got to go with science. I don’t know better than all of these doctors.”

Children typically receive their first measles, mumps and rubella vaccine between 12 and 15 months of age. When enough of a given population is inoculated “herd immunity” protects babies less than a year old and other people who can’t be vaccinated from being exposed to the diseases.

The Senate health committee passed the bill 6 to 2 on Wednesday. That was just the first step – the legislation has many more hearings before it could become law. Meanwhile, Washington, Oregon and North Carolina have also considered legislation to limit families’ rights to opt out of mandatory vaccinations, and all of those efforts have stalled. West Virginia and Mississippi are the only states that allow no exemptions to their vaccine laws for personal beliefs or religion.