With only four weeks until Iowa Republicans gather for presidential caucuses, and with the candidate field shrinking, both candidates and bloggers are intensifying their focus on the battle for the Republican nomination for president.  Despite uniform opposition to most or all of the tenets in the health law, the candidates are seeking political advantage by distancing themselves from each other on health policy. 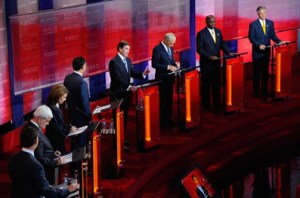 Here are what some blogs are saying about the GOP field’s positioning on health care:

At the Washington Post’s Right Turn blog, Jennifer Rubin writes on Newt Gingrich’s former backing of an individual mandate to purchase health insurance and how it’s affecting his standing among conservatives. “If some conservatives think Romney is handicapped in taking the fight to President Obama on health care [since he signed a law instituting an individual mandate in Massachusetts] or can’t be counted on to repeal Obamacare, is Gingrich any better? The problem some conservatives are seeking to ‘solve’ — find a more ideologically pristine nominee than Romney — should lead them to Rick Santorum or Rep. Michele Bachmann (R-Minn.), not Gingrich, who, in addition to NewtCare, has defied the right-wing base on illegal immigration” (11/30).

Austin Frakt, at The Incidental Economist, seeks clarity about Gingrich’s ideas on Medicare: “On Medicare, [Gingrich’s] website reads only, ‘Create more choices in Medicare by giving seniors the option to choose, on a voluntary basis, a more personal system in the private sector with greater options for better care. This would create price competition to lower costs.’ That could mean so many things that it is close to meaningless” (12/1).

Devon Herrick, writing on John Goodman’s Health Policy Blog at the National Center for Policy Analysis, fact-checks The Washington Post fact-checkers on Michele Bachmann’s recent comments that the health law would take money from older Americans and use it to pay for health care for younger people. “The Post went on to explain why it thought the statement was inaccurate. … ‘The Medicare savings in the health care law are aimed at providers, not seniors; meanwhile, seniors stand to benefit from aspects of the health-care law that Republicans want to repeal.’ The Medicare chief actuary would seem to agree with Bachmann. In his illustrative alternative report, Richard Foster explained that under the impending cuts to the Medicare program, one in seven hospitals that treat Medicare patients would be insolvent; Medicare reimbursements would fall below Medicaid levels, causing seniors to increasingly have difficulty finding providers who will treat them” (12/2).

In the meantime, John Goodman, at the same blog, writes that he likes Romney’s idea to give veterans “the opportunity to choose private health care alternatives to the Veterans Health Administration (V.H.A.), a system that too often fails them. Why can’t we do for veterans what we do for seniors? About one in every four Medicare beneficiaries is not actually in Medicare. They have enrolled instead in private health insurance plans operated by such entities as Aetna, United Health Care, Cigna, etc.” (12/5).

At ThinkProgress Health, Igor Volsky writes about Rick Santorum’s recent comments defending insurers who discriminate against people with pre-existing conditions. “The former Pennsylvania senator not only defended insurers for denying coverage to people with pre-existing conditions, he also argued that individuals who are sick should pay higher premiums because they cost more money to insure: … Santorum: ‘Well, we should pay more. She’s going to be very expensive to the insurance company and, you know, that cost is passed along to us. … I’m okay with that'” (12/2).

Volsky also writes that Rick Perry has it wrong when he says that an executive order allows a president to repeal a congressionally approved law, like the health overhaul. “But a Government Accountability Office report out just last week found that while a president would be able to alter certain regulations, issuing waivers through executive authority would ‘likely conflict with an explicit congressional mandate and be viewed incompatible with the express … will of Congress. …  A President would not appear to be able to issue an executive order halting an agency from promulgating a rule that is statutorily required by PPACA,’ the report said” (12/3).

Finally, James Pethokoukis, at the American Enterprise Institute’s Enterprise Blog, espouses the virtues of Jon Huntsman’s conservatism on health care reform: “His approach to healthcare reform relied on markets rather than mandates. As the Club for Growth describes it, ‘Utah’s main health reform contained no individual mandate, no employer mandate, and has very limited regulatory authority. … It empowers individuals to take ownership of their own health insurance and to choose coverage that works for them'” (12/4).