A visit to the emergency department or a physician’s office can be confusing and even frightening when you’re trying to digest complicated medical information, perhaps while you’re feeling pain or discomfort. For the 25 million people in the United States with limited English proficiency, the potential for medical mishaps is multiplied. 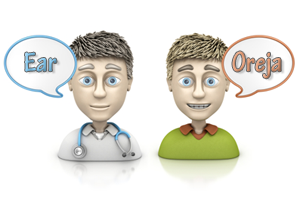 A trained medical interpreter can make all the difference. Too often, however, interpreter services at hospitals and other medical settings are inadequate. Family members, including children, often step in, or the task falls to medical staff members who speak the required language with varying degrees of fluency.

According to a study published in March, such ad hoc interpreters make nearly twice as many potentially clinically significant interpreting errors as do trained interpreters.

The study, published online in the Annals of Emergency Medicine, examined 57 interactions at two large pediatric emergency departments in Massachusetts. These encounters involved patients who spoke Spanish at home and had limited proficiency in English.

Researchers analyzed audiotapes of the visits, looking for five types of errors, including word omissions, additions and substitutions as well as editorial comments and instances of false fluency (making up a term, such as calling an ear an “ear-o” instead of an “oreja”)

They recorded 1,884 errors, of which 18 percent had potential clinical consequences.

It makes sense that trained interpreters, especially those with more experience, would make fewer errors, says Glenn Flores, a professor and director of the division of general pediatrics at UT Southwestern Medical Center and Children’s Medical Center of Dallas, who was the study’s lead author. Experienced interpreters “know the medical terminology, ethics, and have experience in key situations where you need a knowledge base to draw on,” he says.

Title VI of the Civil Rights Act of 1964 prohibits discrimination based on race, color or national origin. Courts have interpreted that to mean that all health-care providers that accept federal funds — because they serve Medicare and Medicaid recipients, for example — must take steps to ensure that their services are accessible to people who don’t speak English well, according to the National Health Law Program, a nonprofit that advocates for low-income and underserved people. (Doctors whose only federal payments are through Medicare Part B are exempt from this requirement, however.)

The Census Bureau estimates that nearly 9 percent of the population age 5 or older has limited English proficiency, which the bureau defines as people who describe themselves as speaking English less than “very well.”

Hospitals and other medical providers are in a tough spot, say experts. The law prohibits them from asking patients to pay for translation services, and they may not receive adequate or in some cases any other reimbursement.

A dozen states and the District reimburse hospitals, doctors and other providers for giving language services to enrollees in Medicaid, the joint federal-state program for low income people, and in CHIP, a federal-state health program for children, according to Youdelman.

A 2008 survey by America’s Health Insurance Plans, an industry trade group, found that 98 percent of health insurers provide access to interpreter services, but providers and policy experts question that figure. According to a survey by the Health Research and Educational Trust, in partnership with the American Hospital Association, 3 percent of hospitals received direct reimbursement for interpreter services, most of that from the Medicaid program.

“Most hospitals that make this a priority make it a budget item,” says Youdelman.

Hospitals and other providers realize that providing competent interpreter services can help ensure that they don’t miss or misdiagnose a condition that results in serious injury or death, say experts. Trained interpreters can also help providers save money by avoiding unnecessary tests and procedures.

Youdelman cites the example of a Russian-speaking patient in Upstate New York who arrived at an emergency department saying a word that sounded like “angina.” The emergency staff ran thousands of dollars’ worth of tests, thinking he might be having a heart attack. The real reason for his visit: a bad sore throat.

Like many hospitals, Children’s Medical Center of Dallas provides interpreter services around the clock via varying modes of communication — face-to-face, telephone and video — delivered by a mix of trained staff interpreters and outside contractors.

When Nadia Compean, 23, was six months pregnant, her doctor in Odessa, Texas, told her that her baby had spina bifida, a condition in which the spinal cord doesn’t close properly, leading to permanent nerve and other damage.

The local hospital wasn’t equipped to handle the birth and subsequent surgery that her daughter would require, so Nadia and the child’s father traveled to Dallas, about 350 miles away.

Neither speaks much English, but at Children’s Medical Center of Dallas, interpreters helped them understand what to expect, Nadia said (through an interpreter).

Nadia says she learned that her daughter, Eva, would be born with a lump on her back and would require immediate surgery. She also learned about problems that Eva may experience walking and using the toilet, she says.

Eva was born on March 6. Because of her medical needs and the lack of adequate interpreter services in Odessa, the couple is considering relocating to Dallas, where the father hopes he can find construction work.