SAN JOSE, Calif. — Luisa Blue, head of the local Service Employees International Union in San Jose, has five more months to spend a million dollars. The union received a grant from Covered California, the state’s health insurance marketplace and is using some of the money to call people in their homes at night and on the weekend, as part of a massive education effort.

“Over 4,000 (people) have said tell me more about Covered California and how can I enroll to get health insurance,” Blue says of her organization’s first two weeks on the case.

But once they’re primed to enroll, the hand-off to counselors who can help Californians sign up for coverage has been rocky. Many counselors are still attending training or are awaiting background checks and state-issued licenses; some just need a computer log-in.

The month of October was always supposed to be about drumming up interest, says Peter Lee, Covered California’s executive director. The state never intended, he says, to have all counselors certified this early.

“We have 20,000 county workers,” Lee says. “The vast majority have been certified and people can go into county offices. Licensed insurance agents? You know, we’ve got about 3,000 – 4,000 of 15,000 completed training. A lot of training is happening everyday and every week.”

Edward Avalos takes a certain pride in being one of the first certified enrollment specialists in the state. At Gardner Health Center in San Jose, a clinic for low-income families, the jumbo-sized calendar on Avalos’ desk is filled with appointments – he even makes house calls. He had to silence his office phone to be interviewed for just a few uninterrupted moments. Avalos has had problems signing people up online. 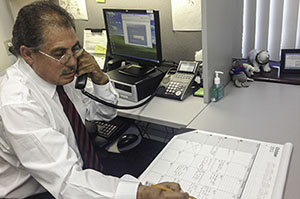 “There’s sometimes when you get to the last page and unfortunately you run into a stumbling block. The page freezes and you have to start over again,” he says.

When that happens, Avalos pulls out a paper application.

Tracking enrollment with the fervor of a stock market watcher obscures the fact that the state is well on its way of meeting the goal of signing up 600,000 people by March, according to Gerry Kominski, director of the Center for Health Policy Research at UCLA.

Kominski says to keep its front-runner status, California needs to keep up the pace.