In a recent letter hailed by advocates in the lesbian, gay, bisexual and transgender (LGBT) community, the Department of Health and Human Services clarified that provisions in the Affordable Care Act prohibiting sex discrimination in health insurance apply to transgender people. 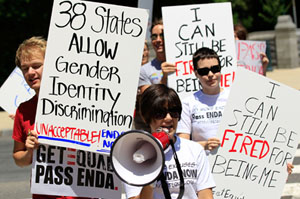 Members of GetEQUAL, a lesbian, gay, bisexual and transgender organization, stage a protest on Capitol Hill in 2010 in Washington, D.C. (Photo by Alex Wong/Getty Images).

With HHS declaring that it would be discriminatory for employers, insurers and others to deny health insurance coverage or benefits based on “gender identity or failure to conform to stereotypical notions of masculinity or femininity,” advocates hope that transgender people — those who identify with a sex other than the one they were born as — will take another step toward achieving equality in health care.

“This is a population that’s very underserved and in need of a lot of health care,” says M. Dru Lavasseur,  a transgender rights attorney at Lambda Legal, an advocacy group based in New York. “This HHS letter sends a message that we need to address its problems.”

The HHS letter, issued by the department’s Office of Civil Rights, adds to recent court decisions and a ruling by the Equal Employment Opportunity Commission in April that the Civil Rights Act’s prohibition against sex discrimination applies to transgender people. The letter says the office of civil rights is now accepting and investigating complaints of sex discrimination under the health care law. If discrimination is found and an organization doesn’t act voluntarily to resolve the problem, the office may move to halt federal financial assistance, among other actions.

The letter does not mean that insurers have to cover surgery related to gender transition, according to a statement posted online by HHS, which plans to issue further guidance on the subject.

Although they are not required to do so, a growing number of employers provide health benefits that address the needs of transgender individuals.

In addition to surgery to reconstruct the genitals, reduce or augment the chest or contour the face, transgender patients may need hormone therapy, mental health counseling and short-term leave, among other things.

For the past decade, the Human Rights Campaign, a Washington-based LGBT advocacy organization, has published an annual corporate equality index that scores large companies, including the Fortune 1000 companies and the country’s 200 top-grossing law firms on how equitably they treat their LGBT employees.

In 2012, the requirements to receive top marks got tougher. Companies have to provide equal health care for transgender employees, without any exclusions for medically necessary care, and the survey for the first time required coverage of gender reassignment surgery. Even with that stringent standard, the number of companies getting a perfect score for transgender-inclusive benefits grew from 85 in 2011 to 207 in 2012.

Getting a perfect score is important not only for the benefits it provides transgender employees but also because it sends a message to job applicants about the workplace environment.

“We hear from hiring managers quite a bit,” says Deena Fidas, deputy director for the workplace project at the Human Rights Campaign. “Younger job applicants are looking at these scores to see if the employer takes diversity and inclusion seriously.”

But despite improvements, many employers don’t cover some of the benefits transgender people need. A survey by the National Business Group on Health, which includes large employers, found that in 2010, 14 percent of its members covered gender reassignment surgery and 32 percent covered nonsurgical treatments such as hormones and counseling, says Helen Darling, the organization’s president.

On the individual market, insurers may deny coverage to transgender people altogether, sometimes claiming they have a preexisting condition. Under the new health law, beginning in 2014, health plans will no longer be able to deny coverage on that basis.

But for some transgender people, such as Nakoa Nelson, a full-time student in Hawaii, getting coverage isn’t the problem. Nelson has insurance through Med-Quest, a state Medicaid program for low-income people, but it doesn’t cover all the services he needs.  Nelson, 44, has been taking testosterone hormones for the past couple of years. He pays the roughly $60 monthly charge out of pocket. He’d like to get a double mastectomy and chest contouring, but insurance doesn’t cover that, either. So far he’s saved about half of the $13,500 he needs for the procedure.

Like many transgender people, Nelson faces problems that go beyond insurance coverage. Two years ago, he had a severe allergic reaction to something in a cookie he ate at church. His partner drove him to the fire station five minutes away, where the town’s ambulance service is located.

Nelson, who says he looks “like a dude with breasts,” says that when the firefighters saw him, they became rude. They opened his shirt to check his heart and then said there was nothing they could do to help him.

Nelson and his partner raced to a clinic, where he was given oxygen and steroids and eventually began to feel better.

Nelson’s experience is hardly unusual, says Levasseur. “It’s one of the main issues we see,” he says. “People go to the doctor, and they say, ‘We don’t treat your kind.’ “

Advocates say they hope that the HHS letter will help reduce incidents like the one Nelson faced.