Fanny Ortiz, a mother of five who lives just east of downtown Los Angeles, spent nearly a decade married to a man who controlled her and frequently threatened her. Then, she said, his abuse escalated. “He would physically hit me in the face, throw me on the wall,” she recalled.

Ortiz, 43, eventually left the marriage, taking her children with her. A few years later, she learned that the East Los Angeles Women’s Center offered domestic violence services at the Los Angeles County-USC Medical Center, near her home. Now she goes to the hospital campus for weekly therapy sessions, which she said have helped stop her suicidal thoughts.

“I was afraid to talk,” Ortiz said. “Now I am more open to talk about things that I was holding in.”

Nearly 1 in 4 women have experienced serious physical violence at the hands of a partner. They often end up in the emergency room or the doctor’s office. But they don’t typically volunteer the reason for their injuries, and doctors don’t always ask about abuse in the home. That failure of communication means the patients may miss out on the help they need.

Yet a growing number of health providers and anti-abuse agencies in California and around the country are collaborating to identify victims and get them help. More doctors now screen their patients for signs of abuse and more agencies place victims’ advocates inside health centers. Education and counseling for people experiencing violence is also more widely available in clinics and hospitals.

About four years ago, the East Los Angeles Women’s Center opened offices on the campus of L.A. County-USC, a busy public hospital. Since then, center staff members have trained more than 2,500 doctors, nurses, social workers and others to identify victims of domestic violence. They also respond quickly to calls from the medical center’s emergency room, inpatient hospital and outpatient facilities to help patients in crisis.

Today, the women’s center has embarked on an innovative approach: In February, it plans to open a short-term shelter for abuse victims on the medical center grounds. The 10-bed shelter fills a serious need, said Deirdre Anglin, an emergency room physician at L.A. County-USC.

“We sometimes have patients in the emergency department who don’t have a place to go, and in the evenings and nights all the shelters in L.A. will be filled,” Anglin said.

Victims of abuse can suffer long-term health problems, including chronic pain, frequent headaches, depression, diabetes and asthma. And they have higher health costs than people who have not experienced abuse. So “it makes complete sense to have the health care providers acting as allies and partners in treating domestic violence,” said Peter Long, CEO of the Blue Shield of California Foundation. (The foundation provides support for Kaiser Health News coverage in California.)

The foundation has funded 19 partnerships between health centers and domestic violence agencies around the state, including the L.A. County-USC office of the East Los Angeles Women’s Center. Similar partnerships operate in Illinois, Maryland and other states.

Advocates say that hospitals and clinics are ideal settings to respond to the needs of abused women. 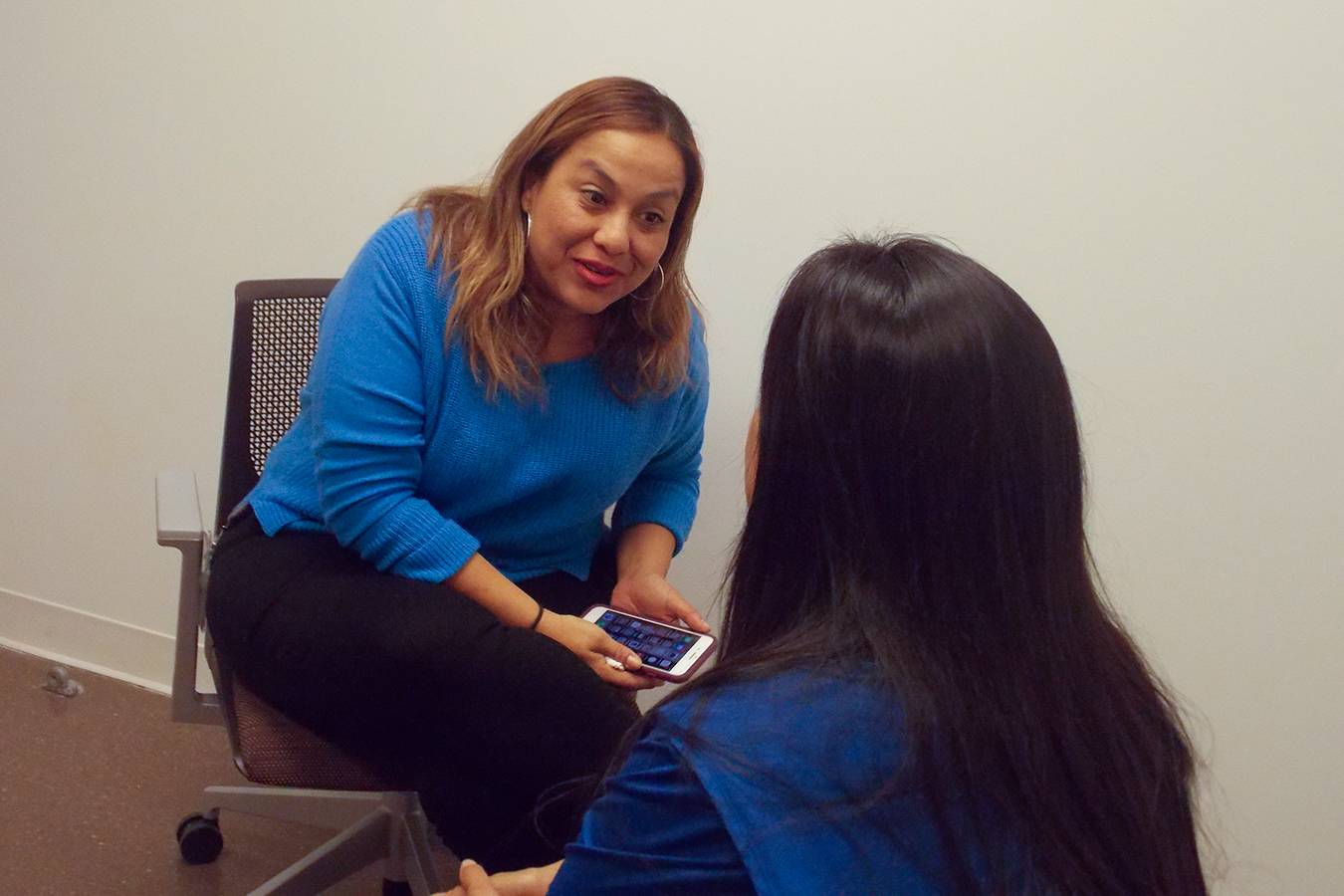 The East Los Angeles Women’s Center is opening a domestic violence shelter on the Los Angeles County-USC Medical Center campus. The proximity makes it easier for doctors to ask patients about violence, said Rebeca Melendez, director of wellness at the center’s hospital office. “They don’t need to know all the answers,” she says. “They just need to call us.” (Anna Gorman/KHN)

In the San Gabriel Valley, the YWCA sponsors domestic violence support groups at a community clinic, while the clinic offers health education for survivors of abuse at the YWCA. In Sacramento, a Native American health center works closely with a domestic violence group a few blocks away.

Doctors have an “unprecedented opportunity to promote prevention and to respond because they are seeing patients that may not ever reach out to a domestic violence agency or police for help,” said Lisa James, director of health for Futures Without Violence, which runs a national resource center dedicated to improving the response of medical professionals to domestic violence. “They can provide this critical lifesaving intervention.”

The proximity of the East Los Angeles Women’s Center to the hospital and clinic buildings on the L.A. County-USC campus makes it easier for doctors to ask their patients about violence, said Rebeca Melendez, director of programs for the center’s office at the medical center. The medical providers know where to turn for guidance – and that the help is nearby.

“They don’t need to know all the answers,” she said. “They just need to call us.”

This growing collaboration between the medical profession and anti-abuse agencies is driven in part by the Affordable Care Act, which requires that health plans cover domestic violence screening and counseling.

The U.S. Preventive Services Task Force recommends doctors routinely question women about violence in the home and refer them to services if needed. The task force concluded in 2013 that intervention could reduce violence and abuse as well as mental and physical health problems.

Organizations such as the American Congress of Obstetricians and Gynecologists and the American Medical Association also recommend routine screening and counseling for domestic violence.

In the past, patients would go to health centers with such problems, but providers did not feel comfortable asking questions about abuse at home, said Long, of the Blue Shield of California Foundation.

Treating patients who are in abusive relationships is “very challenging,” said Anglin, the ER physician. “There is no pill to give.” But asking about violence needs to be part of a physician’s job, she said.

“Part of what we need to do is try to identify patients who may be in a dangerous situation … so we are not just sending these patients back to the same situation they were in only to come back worse off another time.”