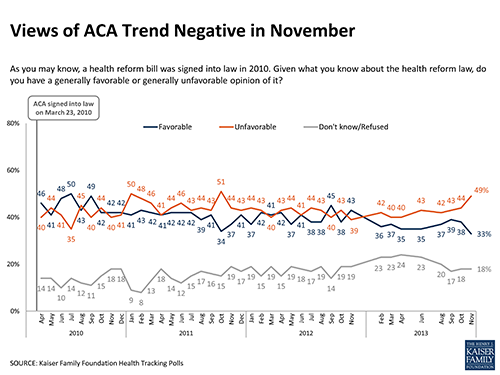 With its troubled rollout of the new insurance marketplaces, the Obama administration has achieved something Republicans have failed to do: seriously dent the popularity of the health care law, according to poll released Friday.

Nearly half of Americans now hold an unfavorable view of the law and only a third like it, according to the poll from the Kaiser Family Foundation. (KHN is an editorially independent part of the foundation.)  The 16-percentage point gap between positive and negative views is almost the largest it has been since the foundation began its monthly tracking poll in April 2010. The only time the gap was bigger was in October 2011, when the Republican presidential candidates, gearing up for the primary season,  were taking turns bashing the law.

Support among Democrats plunged from 70 percent last month to 55 percent. Women, who were split over the merits of the law month, have turned against it, with views mirroring the overall public view this month. While most people don’t think it will affect them one way or the other, 43 percent of the public now says the law is going to leave the country worse off, while 34 percent think it will be an improvement.

With 49 percent of people opposing the law and 33 percent favoring it, the Kaiser poll results are broadly similar to those reported earlier this month by other organizations. A Washington Post-ABC poll found a 57 percent majority against the law, with 40 percent favoring it.  Gallup found that 55 percent of people disapprove of the law while 40 percent like it.  Gallup found the most popular criticisms were that the law was “government interference” and “forcing people to do things.” Gallup also found that a minority of the public believes it’s the government’s responsibility to make sure all Americans have health coverage.

The drop in support comes as more people are paying attention, particularly to the insurance marketplaces that opened Oct. 1. According to the Kaiser poll, more than half of the public say they have followed news about the healthcare.gov website problems. The same portion say they are hearing tales of anecdotal complaints from people unhappy that their individual health policies have been canceled as insurers move to adopt the law’s more rigorous requirements.

People without health insurance now are more likely to say they have not heard much about the marketplaces than those with health coverage. Nearly six in 10 of the uninsured say they plan to obtain coverage next year, while a third say they will refuse.

The pollsters offered one hopeful comparison for supporters of the law, noting that the Medicare “Part D” prescription drug benefit was also unpopular when it started in 2006, but now is viewed positively. Support of the drug benefit has grown from just 28 percent at the end of 2005 to 63 percent this month.

“Of course, it is far too early to tell what will happen to public opinion on the ACA as it moves through the next phase of implementation, but the Medicare Part D experience suggests that it is not unusual for a new law of this sort to be poorly perceived at the outset,” the pollsters wrote.

The poll was conducted by phone Nov. 13 through Nov. 18 among 1,204 adults. The margin of error is +/- 3 percentage points, with larger margins for subgroups.