SACRAMENTO, Calif. — Florence Marquez liked to describe herself as a cannery worker, even though she was best known in her heavily Latino East San Jose neighborhood as a community activist.

She strode alongside Cesar Chavez in the farmworker movement during the 1960s and 70s. She helped build affordable housing for poor families near her local church.

But eight years ago, Florence, now 86, couldn’t find her way to the house she had lived in for 50 years. “That’s when we knew she needed 24-hour care,” said her oldest daughter, Barbara Marquez, 61.

Florence was diagnosed with Alzheimer’s disease, which robbed her of her memory and her fierce independence. Across the United States, stories like hers are becoming more common, particularly among Latinos — the fastest growing minority in the country.

With no cure in sight, the number of U.S. Latinos with Alzheimer’s is expected rise by more than eight times by 2060, to 3.5 million, according to a report by the USC Edward R. Roybal Institute on Aging and the Latinos Against Alzheimer’s network.

Advanced age is the leading risk factor for Alzheimer’s disease and the likelihood of developing Alzheimer’s doubles about every five years after age 65. As a group, Latinos are at least 50 percent more likely than whites to have Alzheimer’s, in part because they tend to live longer, the report notes. 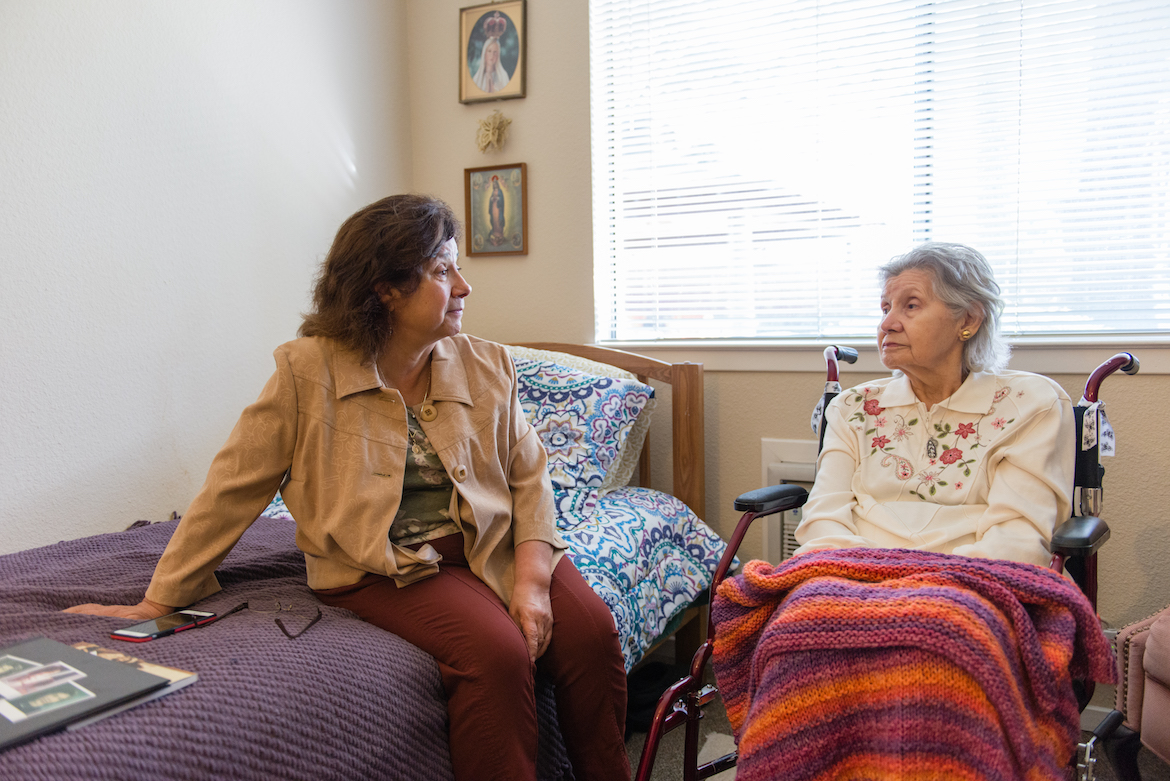 Barbara Marquez visits her mother Florence Marquez at her nursing home, Sagebrook Senior Living, in Carmichael, Calif., in December 2016. Barbara was her mother’s primary caregiver until the family decided to put their mother in a 24-hour care facility. (Heidi de Marco/KHN)

“This is an incoming tsunami,” said Dr. William Vega, one of the report’s authors and the Roybal Institute’s executive director. “If we don’t find breakthrough medication, we are going to be facing a terrible financial crisis.”

That tidal wave of Alzheimer’s cases is prompting some tough conversations in Latino families, who often pride themselves on caring for elders at home, rather than placing them in nursing homes.

Those talks come with a lot of guilt, Barbara said. Until recently, Barbara was her mother’s primary caregiver. Her sister and brother helped out.

“But it was more than I could have anticipated,” Barbara said, recalling sleepless nights as she tried to make sure Florence didn’t get up and wander off. “It impacts your health, it impacts your marriage. So we looked for help.”

About 1.8 million Latino families nationwide care for someone with Alzheimer’s and other types of dementia. And while the Roybal report shows that Latino families are less likely than whites to use formal care services, such as nursing home care, institutionalized care is becoming more common among these families.

Until recently, Tania Yanes, 51, was the main caregiver for her mother, Blanca Rosa Rivera, 76, who was diagnosed with Alzheimer’s in 2004. Her mother is “100-percent dependent” on her children to eat, bathe, and move around the house. The dramatic increase in the number of U.S. Latinos with the memory-robbing disease is putting a strain on families and health care resources.

Between 1999 and 2008, the number of elderly Latinos living in U.S. nursing homes grew by about 55 percent, a rate that outpaced the growth of the overall Latino population during that time, according to research published in July 2011 in Health Affairs.

That can be costly. Nationwide, the average cost for basic services in an assisted living facility is $43,200 per year, according to the Alzheimer’s Association. Yearly nursing home care now averages more than twice that, at slightly more than $92,000.

For many Latino families, getting outside help isn’t an option. It’s often too expensive for seniors who aren’t eligible for Medi-Cal, California’s version of the Medicaid program for low-income people, which generally pays for nursing home care. Immigrants who are in the country unlawfully do not qualify for it, nor do people whose incomes are too high.

Florence’s children decided to take their mother out of her house in San Jose, and they brought her to live with her daughter Barbara in Fair Oaks, just outside Sacramento. They sold the San Jose house, thinking it would help pay for institutionalized care should their mom need it down the road.

She did not qualify for Medi-Cal, so she lived with Barbara for about three years. But after trying out a senior day care program outside of the house at a cost of about $78 a day, Barbara and her family placed Florence in a senior home in the Sacramento suburb of Carmichael, where she has been living for the past year.

The decision to institutionalize Florence Marquez left her children feeling both guilty and overwhelmed by the steep expense. Her care now costs $3,000 to $4,000 per month, they said. They pay extra for specialized services.

They had the proceeds from the sale of Florence’s house, “but those resources are dwindling,” Barbara said. “What do we do when that money is gone?” 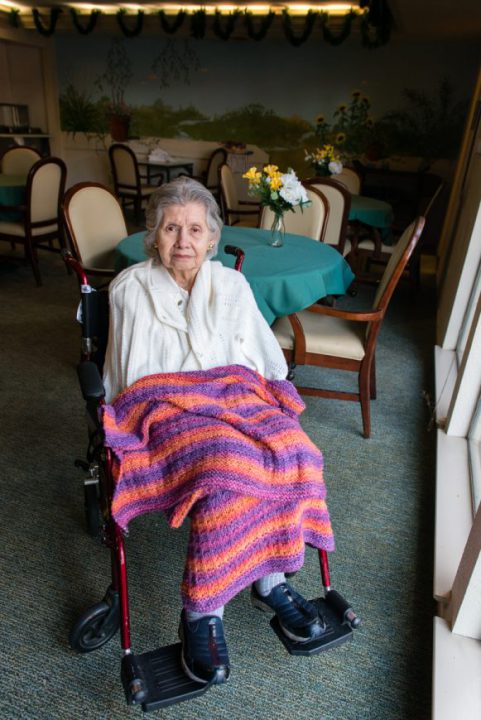 Florence Marquez, 85, was diagnosed with Alzheimer’s disease eight years ago. She lived in the same house for 50 years, but one day she couldn’t find her way back home. (Heidi de Marco/KHN)

The Roybal study estimates that the cumulative economic impact of Alzheimer’s among Latinos will hit $2.35 trillion by 2060. That figure includes the costs of medical and long-term care, as well as the lost earnings of family members who provide unpaid in-home care, and of the Alzheimer’s victims themselves, according to the study.

Gustavo Lopez of Chicago cares for his mother, Agustina Lopez, 76, who was diagnosed with Alzheimer’s disease seven years ago.

Gustavo, 48, and his four siblings looked into assisted living but couldn’t afford it. Agustina, after moving between her children’s homes, eventually landed with Gustavo, her youngest.

When Gustavo first took on the role of primary caregiver, his mother still did most things on her own, he said. But she now relies on him to help her eat, bathe, dress and take her medication.

So Gustavo needs a job with flexible hours. He’s worked mostly as a waiter. Other employment opportunities have come his way, some with better pay, but caring for his mother comes first, he said.

Gustavo does get some help from family friends who check in on his mom while he is at work. He also found Casa Cultural in Chicago, a social service agency that offers a day program for seniors. He can drop his mom off at the center for a few hours, giving him a respite.

Free or low-cost programs like these are available in many communities, but families need to do research and ask for help, said Constantina Mizis, president of the Chicago-based Latino Alzheimer’s and Memory Disorders Alliance.

The alliance, formed in 2009, focuses on family members who are primary caregivers. Mizis said she has met many caregivers who are near their breaking point. The nonprofit offers training for them, helps find resources to boost their own well-being and puts on community events for families.

When seeking support, the best place to start is at a local community group or center — a church, a nonprofit, a United Way office, or the local Alzheimer’s Association chapter, for example, Mizis said. These groups will most likely refer caregivers to a county’s Agency on Aging or a state’s Department of Aging.

There, families are assigned a social worker who can discuss what benefits are available. If an Alzheimer’s patient qualifies for Medicaid, these benefits could include caregiver training and payment through programs such as California’s In-Home Supportive Services. But benefits and eligibility vary by state.

In 2010, the Social Security Administration recognized early-onset Alzheimer’s as a medical condition eligible for disability income. That could help people whose Alzheimer’s disease is diagnosed before the age of 65, but many Latino families aren’t aware the program exists, Mizis said.

A Push For Awareness

Because Latinos are more likely to use informal and more affordable care options, the Roybal report calls for improving training and resources for families in both English and Spanish.

Among the caregivers who opt to keep a parent with Alzheimer’s at home is Julia Garcia, of Houston, Texas. She rotates with her three daughters to watch her mother, Marcela Barberena, 85, who was diagnosed with the disease last year.

Julia, who had been unfamiliar with Alzheimer’s, initially thought her mother’s forgetfulness and childlike behavior was due to age.

“Too often people will see Alzheimer’s as a result of old age, but this brain-deteriorating disease is not natural,” said Vega, co-author of the report.

Julia Garcia said she realized it was something more serious when her mother took a shuttle bus from Houston’s international airport without knowing her destination.

“We had agreed I’d pick her up, but she left on her own,” Julia said. “She ended up downtown. It was the scariest moment of my life.”

As a new caregiver, Julia reached out to her local Alzheimer’s Association chapter for information. While some resources are available in Spanish in the Houston chapter, Julia noticed very few Latinos attending the informational workshops or classes.

Spanish-language media provided little information about the disease. “You rarely hear anything about it on TV or the radio,” she said.

In addition, many Latinos, including the Marquez, Lopez and Garcia families, are often unaware of clinical trials through which families can gain access to experimental therapies and medications at little or no cost.

Latinos are underrepresented in clinical trials sponsored by the National Institutes of Health: They account for 17 percent of the U.S. population but only 7.5 percent of participants at the 32 NIH-funded Alzheimer’s research centers across the country, according to the Roybal study.

Latino volunteers for these trials are important in helping researchers develop Alzheimer’s treatments that work for all ethnic groups, the report says.

“This is why it is so important to invest in the education of these communities,” Mizis said.

“I see firsthand everyday how much help our communities need,” Mizis said. “And this need keeps growing.”