This story was done in collaboration with

TULSA, Okla. – An hour into knee replacement surgery – with U2’s I Still Haven’t Found What I’m Looking For playing in the background – Dr. Yogesh Mittal smiles as he raises the left leg of his patient, 76-year-old Frank Morrow.

While holding Morrow’s thigh, the surgeon lets the bottom half of the leg fall. “Look at that,” he says, pointing to the wide range of motion permitted by the metallic-colored implant. “He’s going to love this new knee.”

Medicare, the government program that is paying for Morrow’s surgery, likes it, too.

The surgery at the 691-bed Hillcrest Medical Center here is part of an experiment testing a new “bundled” payment system. Medicare makes a single reimbursement for all the hospital and doctor care for heart and joint procedures, rather than making separate payments to the facility and physicians.

Such combined payments are getting close attention during the health care debate as a way to encourage hospitals and doctors to work together to hold down costs and improve care.

Bundling payments moves medical charges away from the traditional fee-for-service system that pays providers separately for individual services – an arrangement critics of the current system say leads to doctors and hospitals delivering more care, but not better care.

“The current payment system is not designed to drive efficiency,” says Harold Miller, chief executive of the Network for Regional Healthcare Improvement in Pittsburgh. For example, he says, it rewards providers for making mistakes that require additional procedures or result in hospital readmissions.

Health-overhaul bills being debated in Congress would promote bundling by calling for more Medicare pilot projects such as the one at Hillcrest and allowing Medicare to expand the concept if they are successful. Any success in the Medicare arena could have far-reaching implications because the health program for the elderly makes up 20% of the nation’s total health spending.

Some physicians have raised concerns about the bundling experiment. Larry Martinelli, an infectious disease specialist in Lubbock, Texas, and past chairman of the Infectious Disease Society of America’s clinical care committee, says he fears that bundling payments would pressure hospitals to try to save money by bringing on fewer specialists to consult on patients. “The idea is worrisome,” he says.

Hillcrest’s Dobbs acknowledges that surgeons are looking more closely at when to bring in specialists or order tests.

“I see more focus than I saw in the past,” he says, adding that patient care has improved under the program because of closer attention to quality.

Under the pilot project, Medicare is saving 4.4 percent on the base rates for heart and joint surgeries at Hillcrest because the hospital is offering a discount. For Morrow’s knee replacement, for example, the government is paying $13,211, about $450 less than it normally would.

Meanwhile, Morrow, who is eager to get back to playing basketball, gets a portion of the savings from Medicare – $271 as an incentive for going to a hospital that participates in the program.

The three-year experiment, which began in May, is occurring at five hospitals identified by Medicare for high-quality, cost-efficient care. All competed to get in to program by offering discounts to Medicare.

Besides Hillcrest, Baptist Health System in San Antonio is taking part, while hospitals in Denver, Albuquerque and Oklahoma City are expected to begin participating later this year. Patients who use the hospitals for most heart and orthopedic procedures are paid up to $1,157 for participating, with the bigger amounts pegged to more complicated cardiac surgeries, such as heart-valve replacements.

The incentive payment is supposed to help drive higher admissions to the hospitals in the program, and the pilot is designed to test whether paying Medicare beneficiaries from $250 to $1,157 sways their choice of facilities.

For Frances Carman, 79, of Pawhuska, Okla., who had knee-replacement surgery in July, the $271 payment helped “seal the deal” to go to Hillcrest. “I live on a fixed income, so that extra money will come in useful in helping get my car fixed,” she says. 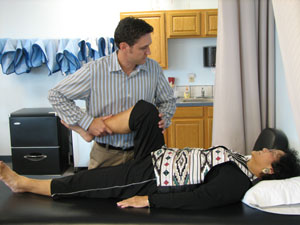 But Morrow says he didn’t know about the incentive payment until after he registered for the surgery. He says he chose Hillcrest because that’s where Mittal wanted to operate. “Getting money back will be nice,” he says, “but that is not the main reason I came here.”

He doubts whether Medicare beneficiaries will be swayed by the limited incentive payment. However, he says, “at least this sends a good signal” that the Centers for Medicare & Medicaid Services “is trying to change the status quo away from fee-for-service to integrated care.”

‘We can save a lot of money’

The health care bill that the Senate Finance Committee approved earlier this month calls on Medicare to start a “bundling” project by 2013 that could involve many different types of health providers, including hospitals, doctors, home health agencies, rehabilitation facilities and nursing homes.

President Obama also supports bundling. In a June speech to the American Medical Association, he said the Medicare payment system should be changed so “you aren’t paid for every single treatment you offer a patient with a chronic condition like diabetes, but instead are paid for how you treat the overall disease.”
Even so, the strategy faces challenges. Because hospitals disburse the “bundled” Medicare dollars, Martinelli and some other doctors worry about the hospital being responsible for their payments.

“Hospitals are going to take care of themselves and their employed doctors first and then at the end of the day comes the doctors in private practice,” he says.

Hillcrest doctors, including Mittal, say that has not been an issue. The hospital says it pays its doctors under the program within 21 days, just as it did before the pilot project.

Some health experts are skeptical that bundling will have a major impact on rising costs any time soon.

“Changing the payment system and changing the delivery system is very hard,” says Bruce Vladeck, who ran the Medicare program during the Clinton administration and is now a senior advisor at Nexera Inc., a consulting service owned by the Greater New York Hospital Association. “Medicare will be broke long before we get there.” Medicare in 2017 will be paying out more money than it takes in, government projections show.

Yet proponents say bundling could make a big difference. “If we can deliver care more efficiently, we can save a lot of money,” Miller says.

In the surgical pilot project, the five participating hospitals give the government discounts of 1 to 6 percent off Medicare rates for some common inpatient orthopedic and cardiac procedures. The hospitals hope to more than make up for the price cuts by lowering costs and luring more patients with the incentive payment.

At Hillcrest, hospital officials and doctors say that the project is forcing them to pay closer attention to costs. By driving tougher deals with makers of implants and other devices, for example, the hospital has cut costs for knee replacement and heart-valve surgery by 5 percent, says CEO Steve Dobbs, adding, “We see the program as a win, win, win.”

The hospital has made a slight profit on the 415 patients – 295 cardiac and 120 orthopedic – that it treated through Sept. 30, Dobbs says. Hillcrest officials say their orthopedic cases are up 2 percent this year and cardiac cases are up 27 percent, but they don’t know whether that’s because of the bonuses or the fact that the hospital just spent millions to improve its facilities.

Hillcrest’s doctors were guaranteed their regular surgical fees as part of the pilot project. But they also get a an additional 25 percent bonus payment from Medicare if they keep costs down while maintaining high-quality scores in areas such as low infection and readmission rates.

“Before, I had no incentive to get costs down,” says Mittal, chief of orthopedic surgery. “Now, I do.”

He says he helped persuade the medical staff to stop using costly antibiotic cement for hip and knee implants rather than the standard version, saying there was no evidence the more expensive adhesive worked better in preventing infections.

Hillcrest doctors also have reduced the number of surgical drapes and disposable drill pins they use and have worked with the hospital to negotiate bigger discounts on certain brands of implants, stents and other supplies. 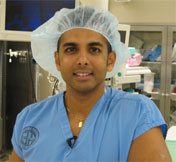 However, some costs have gone up under the project. Hillcrest, which is owned by the for-profit Ardent Health Services, based in Nashville, estimates it has spent $480,000 on the program for claims processing, printing brochures and advertising on television and radio.

“We’ve learned a lot from this program and we are more efficient and safer than we were before,” says Wayne Leimbach, Hillcrest’s chief of cardiology. “But all the extra manpower to get there is not worth the benefit if we are only a little better financially.”

Medicare tried the bundling concept with coronary bypass surgery in the mid-1990s. The program saved $42.3 million over three years, with costs decreasing from 10 to 37 percent at the four hospitals participating in the test. But the hospitals saw no increase in business. That experiment didn’t include an incentive payment for Medicare beneficiaries to use the test hospitals.

Five weeks after his knee replacement surgery, Morrow is still in frequent pain as he waits for the swelling in his knee to go down. But there is progress, too. He’s just graduated from a walker to a cane and has started driving again.

“I didn’t think I would be in this much pain, but they said it’s like having a baby and that when it’s all over you won’t remember it,” Morrow says. “I’m hanging in there and they tell me the knee looks great.”