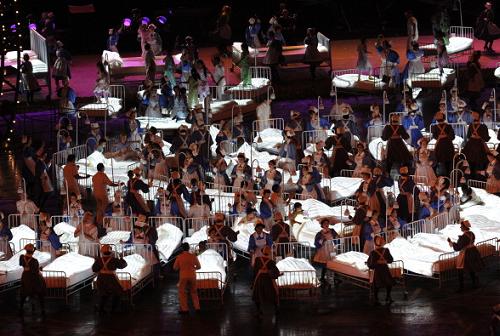 Performers pay tribute to the National Health Service during the Opening Ceremony in London (Photo by Stu Forster/Getty Images).

The opening ceremony for the London Olympics Friday night was full of surprises: The “queen” parachuting with James Bond into the Olympic stadium, an appearance by the evil Voldemort of Harry Potter fame. But maybe the most surprising for health wonks was the tribute to the National Health Service (NHS).

That last salute came in a whimsical segment that organizers said honored “two of Britain’s greatest achievements: its amazing body of children’s literature and its National Health Service.” It was part of the highly choreographed section of the program that explored British history and achievements.

Academy Award filmmaker Danny Boyle, who was the artistic director for the opening ceremony, cast 600 dancers in the tribute that featured scores of children on hospital beds that were transformed into trampolines.  They were supervised by nurses in bright blue dresses with white aprons and doctors. The adults were largely volunteers who are employed in their regular lives by the NHS. As the children fell asleep, their dreams turned into nightmares with villains from British children’s literature. But Mary Poppins arrived shortly to calm the situation.

In a media guide, the ceremony organizers said, “The NHS is the institution which more than any other unites our nation. It was founded just after World War II on Aneurin Bevan’s famous principle, ‘No society can legitimately call itself civilised if a sick person is denied medical aid because of lack of means.’ ”

The publicly funded program offers health care to millions of British residents and employs 1.7 million people. But even the revered NHS is coming under pressure and some health care experts are calling for overhauling parts of the service.