The United States is slowly reducing its rate of premature births, bringing the rate to 11.7 percent in 2011, but the figure is still higher than public health advocates believe it should be. 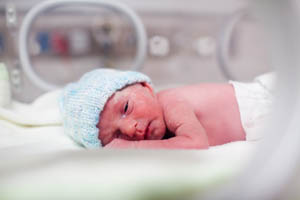 The updated figures come from The March of Dimes, a non-profit group that works to improve the health of mothers and babies, which released its annual Premature Birth Report Card Tuesday. It gives the U.S. a ‘C’ in overall preterm birth rate reductions. And according to the Centers for Disease Control and Prevention and the American College of Obstetricians and Gynecologists, one out of eight babies is born prematurely in the U.S. each year.

In a report released earlier this year, the March of Dimes noted that the U.S. ranks 131 out of 184 countries — putting it close to countries such as Somalia, Thailand and Turkey.

According to their data, the U.S. preterm birth rate is now at the lowest rate in a decade. Dr. Jennifer L. Howse, the president of the March of Dimes and a member of the Kaiser Commission on Medicaid and the Uninsured, said that for 30 years up to 2006 the U.S. preterm birth rate had been increasing. (KHN is an editorially independent project of the Kaiser Family Foundation, which also supports the commission.)

“That’s a profoundly disturbing trend in birth outcomes,” Howse said. But for the last five years, the rates have been steadily decreasing in almost all states.

The March of Dimes’ goal is to bring the national preterm birth rate down to 9.6 percent by 2020. Four states earned “A-Ratings” on their report card: Vermont at 8.8 percent, Oregon at 9.1 percent, New Hampshire at 9.5 percent and Maine at 9.6 percent. The worst states on the report card included Louisiana at 15.6 percent and Mississippi at 16.9 percent and the Commonwealth of Puerto Rico at 17.6 percent.

Howse pointed to a 2006 report from the Institute of Medicine that notes that premature births cost the U.S. $26 billion a year. But she said this year’s improved numbers could have “potential savings of roughly $3 billion in health care and economic costs to society.” According to their data, approximately 64,000 fewer babies were born preterm in 2010 as compared to the peak year in 2006.

Howse said that states that fared better on the report card ensured better access to health care. “It means that women of child bearing age have access to their physicians — that risks are detected earlier rather than later. I do believe we will start to see that kind of halo effect in our maternal and child health outcomes once the [Affordable Care Act] is fully implemented,” she said.