April Pearce is in the middle of her freshman year at UCLA, settling into life away from home for the first time. But instead of thinking about dorm food or exams, the 19-year-old is focused on something a little more abstract: old age.

That’s because of a unique course Pearce is taking called Frontiers in Human Aging, designed to teach first-year college students what it means to get old — physically, emotionally and financially.

Pearce said that before, she barely noticed elderly people when she passed them on the street. Since being in the aging class, seeing them fills her mind with questions: Do they live alone? Will they develop dementia? Do they interact with anyone apart from relatives?

“It’s weird, I know,” she said. “But before, I didn’t have any knowledge really about aging. I didn’t even interact with any older people except for my grandmother. Now I’m learning so much.”

In addition to teaching students about aging, the professors have another goal in mind: inspiring them to pursue careers working with the elderly.

With more than 10,000 baby boomers turning 65 every day, there is a growing need, said Rita Effros, a professor at UCLA’s David Geffen School of Medicine who teaches both undergraduates and medical students.

People over 65 represented about 14 percent of the U.S. population in 2013, and that figure is expected to increase to nearly 22 percent by 2040. During that same time period, the number of people over 85 is expected to triple.

And jobs working with the elderly won’t just be in medicine but also in social work, psychiatry, technology and law, Effros said.

“We try to make it clear that aging is going to be big business,” she said. “Whatever their interests are, they should think about serving the elderly.” The strategy seems to be working on many of the students, including Pearce. She started UCLA in the fall wanting to be a veterinarian and now is thinking about becoming a geriatrician.

The class, which has about 120 students, is taught jointly by Effros, an immunologist, Paul Hsu, an epidemiologist, and Lené Levy-Storms, a social welfare professor. UCLA started offering the course in 2001, but the professors said it is becoming increasingly important.

Throughout the year, students hear lectures about anxiety, genetics and dementia. They discuss ageism and read about Social Security. They stage debates on assisted suicide and watch films about growing old.

The course lasts from September to June, and students can go on to take other classes about aging, including ones that focus on diversity or public policy.

Effros said she wants the students to understand people don’t suddenly become old. Rather, the aging process starts when they are conceived. “A lot of life habits and choices they make as college students can affect them decades later,” she said.

He also described how the students’ own lives will change as they age. Instead of traveling the world, older people eventually become unable to travel out of their own bedrooms.

One student raised his hand and said being a geriatrician sounded gratifying, but also seemed heartbreaking. “You watch so many people decline … how do you handle that?”

Reuben responded that he does get sad and he does cry. “Nobody lives forever and nobody should live forever,” he said. “Death is part of the human experience.”

Michael Margolis, 17, said being in the class has made him think for the first time about his own mortality. “It’s not something we typically think about as teenagers,” he said.

One requirement of the class is that students spend a total of 20 hours volunteering with seniors. 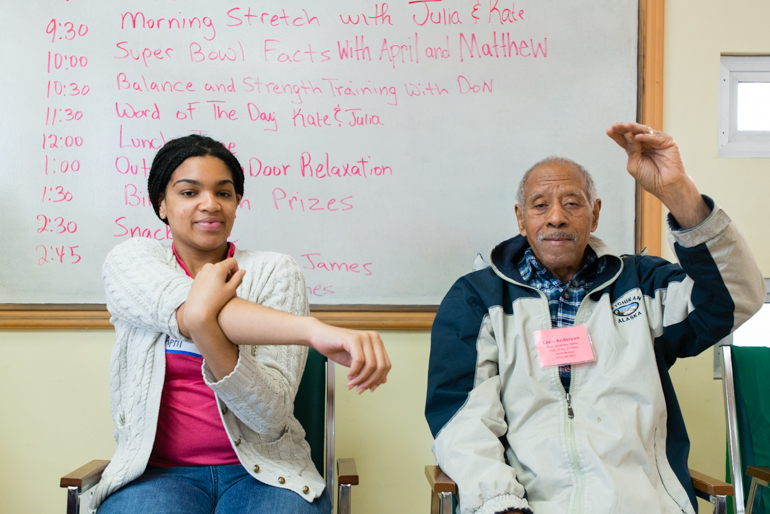 Just after the New Year, the students gathered in a large room on campus to meet representatives from several agencies that serve the elderly. Andres Gonzalez, a director at St. Barnabas Senior Center in Hollywood, told the students they could teach technology classes to active seniors or help deliver meals to homebound ones.

“Even that short interaction becomes very meaningful to the seniors,” Gonzalez said. “You might be the only person they see that day. And they get even more excited seeing younger people.”

April Pearce was assigned to WISE & Healthy Aging, which runs an adult day service center for seniors with dementia. Catherine Jonas, who previously directed of the center, said the students bring a lot of energy to the center, and they often lead bingo games and exercises. They also have lengthy conversations with the seniors.

“What the older adults need is that dialogue,” Jonas said. And for students interested in learning about dementia, interacting with people affected by it “is so much better than what they get from a book,” she added.

One morning early last month, the center was decorated for Valentine’s Day, with red and white streamers and cut-out hearts hanging from the ceiling.

One of the student volunteers, Julia Gierasimow, led the group as they rolled their shoulders, stretched their legs and tried to touch their toes. Gierasimow, who is also considering a career in geriatrics, said all the seniors she’s met so far have interesting life stories. 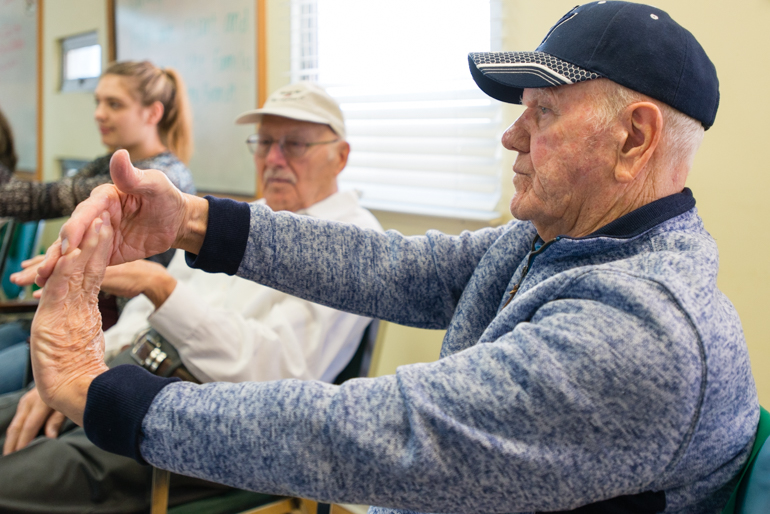 “I don’t know if they remember me from week to week … but they are very friendly,” she said. “As bad as their dementia may be, they still give you a hug.”

After the physical exercises, Pearce sat in a chair in the middle of the room, picked up a microphone and commenced with the mind exercises she’s led each visit. Today’s activity: a quiz game about football.

“Which team won the first Super Bowl ever?” she asked, smiling.

Williams, retired from the Air Force, said he enjoys when the college students come to visit — even though he never would have done the same at their age. “When I was young, I didn’t want to even be near an old person,” he recalled.

Pearce said that in just a few weeks of volunteering, she is becoming more patient and is learning how to talk to people with dementia. “If they say it’s Tuesday, you’re supposed to go with it,” she explained.

It’s not something we typically think about as teenagers.

Pearce said the class has given her a new perspective on her own life, too. She is trying to eat less fast food and exercise more. And she tries not to worry so much about things like not doing well on an exam. “I am going to have health problems later if I let the stress get to me,” she said.

Pearce is also seeing her grandmother in a new light, especially after doing an in-depth interview with her for a class assignment.

She said she learned that her grandma had undergone hip replacement surgery, a kidney transplant, and treatment for cancer. She also discovered her grandma had loved to dance when she was younger, and was popular with the boys.

“I had never really thought about my grandmother as a young woman,” Pearce said. “This class is making me appreciate her more.”