Just as they had so many times during the past 60 years, Marianna and Albert Frankel stepped onto the dance floor. He took her hand in his, and smiling, waltzed her around the room.

“I remembered how it used to be and we could really do the waltz and he would whirl me around until I got dizzy,” said Marianna Frankel, 82, who is 10 years younger than her husband. 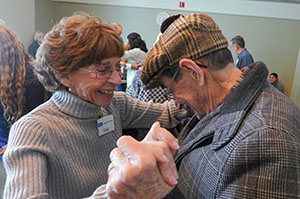 Vikki Helperin, 84, dances with her husband Sidney, 88, a retired anesthesiologist, at the Longevity Center at the University of California Los Angeles Medical Center. He was diagnosed with Alzheimer’s about four years ago, and the couple is hoping the memory sessions will slow the progression of the disease (Photo by Anna Gorman/KHN).

For just a few minutes as the music played, she didn’t think about her husband’s memory loss, the long days of silence or how much he had changed.

The Frankels and about 20 others had come to the University of California Los Angeles Medical Plaza on a breezy Tuesday afternoon to learn ways to boost the memory and help both patients and caregivers cope with what already had been lost.

“Why are we here?” asked Ashley Curiel, who has her doctorate in psychology and was teaching the course at the UCLA Longevity Center. “This is like the gym for your brain. You are going to do a workout for your brain.”

Gathered in a bright conference room, they played games, told stories and practiced using images to improve recall. They practiced tai chi, slowly moving their arms in the air and breathing deeply.  And, after chairs were pushed to the side, they waltzed, memorizing and practicing the steps – left, right, right, left.

Memory loss can have profound impact on patients, leading to an erosion of independence, a sense of helplessness and depression. Yet in some ways, it can affect their caregivers more.  It’s hard to be the only one who can remember shared times.

“It is extremely stressful for the spouse,” said Barry Gordon, professor of neurology and cognitive science at Johns Hopkins University School of Medicine. “It is like taking care of a child … and it never stops.”

That’s where the UCLA Longevity Center comes in –helping both patients and caregivers live with diseases that fray their bond of shared memories. In addition to giving those with memory loss techniques to improve recall, the program also helps the caregivers better understand the disease and provides them with a place to connect with others facing similar challenges. 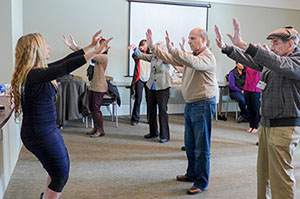 K. Drorit Gaines leads a tai chi session during a weekly program at the University of California Los Angeles Medical Center designed for both people with memory loss and their caregivers. Exercise has been shown to help memory in several ways, including by stimulating connections between brain cells (Photo by Anna Gorman/KHN).

Psychiatry professor Gary Small, who leads the center, said he and others are researching how to strengthen both memory and brain functioning. In one study, they found that doing physical and mental exercise, managing stress, and eating healthy can improve cognitive abilities.

Retaining memory, he said, is about much more than recalling daily activities. “It is really a sense of having control of in your life,” he said. “Your memory defines who you are.”

Many of the memory-impaired participants in the UCLA program had successful careers as lawyers, doctors, professors, researchers. But now, their lives are vastly different: More quiet. More confusing. More frustrating. Most of the patients have neurological problems that go beyond basic aging; some have been diagnosed with Alzheimer’s disease or other types of dementia.

Vikki Helperin, 84, started coming to the memory program in December with her husband Sidney, 88, a retired anesthesiologist. He was diagnosed with Alzheimer’s about four years ago. She hoped it would slow the memory loss.

“He can’t find the words he wants to say,” said Helperin, who worked as a psychologist. “And he is very aware of it. That makes it doubly difficult for him and for me.”

Helperin said she misses the conversations they used to have, and his sense of humor that made him the life of a party.

“Part of what originally attracted me to Sid is that he was so intelligent and so quick-minded,” she said. “At times, I have lost the person I married. …. He is just not the same.”

Since he has started to forget, she has had to take responsibility for everything around the house. “I have had to change as well,” she said. “Sometimes it is kind of exhausting.”

Another participant in the UCLA class, Bernard Hanes, 90, a tall, good-natured man with glasses, is a retired statistics professor at Cal State Northridge who used to solve math problems as a hobby.

His wife, Sally Hanes, 80, said now his short-term memory is gone and he can’t do the problems anymore.

Although he can still get dressed and make himself lunch, he easily gets confused. Just one day after his family threw a big party for his 90th birthday, he had entirely forgotten about the celebration. 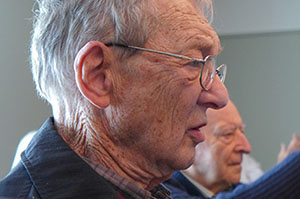 Bernard Hanes, 90, participates in a tai chi class during a memory program put on by the University of California Los Angeles Longevity Center. Hanes, a former statistics professor who did math problems as a hobby, has lost most of his short-term memory. The memory program is designed to help both people with memory loss and their caregivers (Photo by Anna Gorman/KHN).

During one of the activities, Curiel instructed the participants to make up a brief and silly tale to help them remember a list of errands: dog groomer, dry cleaner, gym and post office.

Hanes quickly came up with a story involving a shabby dog and an important letter, and he recited it to his wife and to Karen Miller, an associate professor in Geriatric Psychiatry Division.

Moments later, he had forgotten it. “What story?” he asked.

“You came up with a great story,” Miller said.

“How come I don’t remember it if I came up with a great story?” he said.

Sally Hanes, a former research analyst who is petite with a gray pixie haircut, said watching him forget is difficult, at best.  “It’s heartbreaking. It’s so different from what life was like before.”

Hanes said the program has meant she gets to meet other caregivers and see that her husband’s new and peculiar behaviors – like collecting napkins or closing all the blinds — aren’t unique. She also has gained some tips, she said, such as putting a bright-colored sticker on the microwave to show him which button will heat up his coffee without causing it to explode.

Overall, she said, “It has probably helped me more than it has helped him.”

During the last hour of the UCLA session, those with memory problems continue working on recall techniques, and the caregivers gather separately for a more informal support group.

The caregivers reminisced and commiserated, and shared how their lives have changed.  One woman said her husband couldn’t follow the dialogue on television anymore. Another said hers asked the same question again and again.

Marianna Frankel told the others that she had trouble getting her husband to do much. Occasionally he likes to play Scrabble, but mostly he just wants to lie down. “I’m afraid he’s regressing,” she said.

The memory sessions are the only time he really talks to people, she said. “Al is just so different when he’s here,” she said.

His memory loss is taking a toll on her, too. Recently she was hospitalized with a flare-up of rheumatoid arthritis – made worse, she fears, by stress.  It’s been helpful, she said, to talk to others in a similar situation.

Frankel said she is realistic.  Her husband is 92 and won’t ever be as sharp as he was when they first took the dance floor decades ago. But as he led her around the room, she enjoyed a glimpse of the life they used to have.

As the music wound down, the Frankels took one last spin. He wrapped his arms around her, and she kissed him on the cheek.