This story comes from our partner Georgia Health News.

Jennifer Fuller is typical of the 31 women who went to a Rome, Georgia clinic on a recent Friday or Saturday for a free Pap screening. Fourteen of the women had not had a Pap test in the past three years. Two had gone more than 10 years without the screening. (Two years is the generally-recommended interval.) 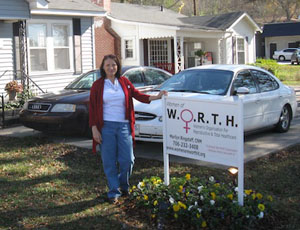 It had been four years for Fuller, 30, of Rome. She has no health insurance and, as a nursing student with three children, has a low family income.

She came to the clinic, she says, “because they’re doing it free.” It costs $200 simply to be seen at a local physician practice, Fuller says.

The free testing at the Women of W.O.R.T.H. (Women’s Organization for Reproductive and Total Healthcare ) clinic provided a complete exam, including the Pap smear to find cell changes that can lead to cervical cancer. Two women, part of the area’s growing Hispanic community, were referred immediately to a local emergency room — one with anemia and an abdominal mass, and the other with apparent congestive heart failure.

Rome is a city with modern hospital facilities and thriving physician practices, yet the clinic, in a modest rented house, fills a void for low-income uninsured women. The steady flow of patients into the waiting room illustrates a crucial gap in the health care system: Despite the array of free and low-cost clinics across the state, many financially strapped patients can’t get certain services they need. The Georgia public health system has suffered from years of budget cuts.

The two days/week clinic is run by certified nurse-midwife Marilyn Ringstaff, a fierce advocate for preventive care for women.

“We see patients who can’t afford public health,” Ringstaff says. “I saw one woman who hadn’t had a Pap screen in 37 years. She had a lump on her breast.” The woman is having surgery this week, says Ringstaff.

Georgia’s network of free clinics “do good work for the uninsured, and they definitely play a significant role,” Lang says. But Ringstaff’s level of commitment to her patients makes her stand out, she adds. “This is a project of passion for her.”

“If you’re uninsured and you need advanced care, there’s usually nowhere to go,” Lang says. Ringstaff advocates on patients’ behalf to get that care, Lang says.

And the focus on women’s health issues makes Ringstaff’s clinic different as well. Public health departments have traditionally played a role in women’s health, but with funding cutbacks they aren’t doing as much, Lang says.

Georgia Watch “gets a lot of calls from women seeking help,” Lang says.

The Rome clinic is open on Fridays and Saturdays, plus some additional odd hours. There’s nothing fancy about the layout. The former kitchen serves as a lab area, and the vaccine-only refrigerator contains Gardasil, the vaccine for HPV, which causes cervical and other sexually-transmitted cancers.

The furniture is donated. Medical supplies are donated as well, or are bought at reduced prices. Volunteers run the office and help with patients.

The clinic gets some grant funding. Besides Pap smears, Ringstaff offers a range of gynecological services on regular office days. She does complete physical exams, STD testing, birth control counseling and prescriptions, and other services, with fees ranging from $20 for an office visit to $45. Many patients who have no money “don’t pay a dime,” says Ringstaff, who also works part time in the health law section of the Atlanta Legal Aid Society.

“We do everything a GYN office can do,” Ringstaff says. 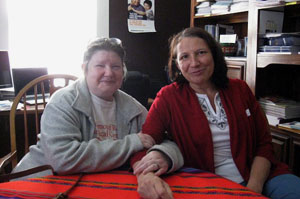 Donna Maxwell (left) credits Marilyn Ringstaff with helping her get Medicaid after she lost her job and health insurance (Photo from Georgia Health News).

Cancer is a particular focus. Though cervical cancer is highly preventable, about 120 women in Georgia die from it each year — one of the highest rates in the nation.

Among Ringstaff’s hundreds of patients is Christina England of Summerville, whose visit to the clinic led to the discovery of a high-grade lesion on her cervix. Georgia Medicaid has a program that covers low-income women with breast or cervical cancer, and England is trying to get qualified.

England, who until recently was homeless, says she faced problems getting seen at a local health department before she came to Ringstaff’s clinic. “I just wish they paid more attention to women who have these problems,” she says.

Ringstaff also helped Donna Maxwell, 50, of Rome get Medicaid after a Pap test found abnormal cells.  “I’m just so thankful to Marilyn for giving me an inkling of what I had to do,” Maxwell says.