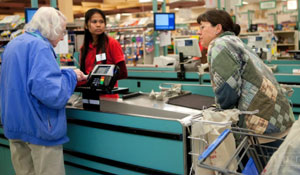 Martha takes an elderly client grocery shopping. One of her three jobs is providing home help for seniors. (Emilie Sommers/NPR)

Between them, Jim and Martha Martin work five part-time jobs. Yet they still struggle every day with medical debts. The burden warps nearly every aspect of their lives.

On a typical day Jim and Martha are up before dawn. That’s when they talk about necessary stuff.

“We’re both working so many jobs, about the only time we sit down together is at breakfast,” Martha says. Jim adds: “There’s not much time when I’m not at work.”

More on the Underinsured

As hard as they both work to make their modest income – about $45,000 a year – the medical bills pile up. Jim and Martha struggle all the time to figure out how to keep up.

Their daughters’ bedrooms are right above the kitchen. So sometimes, 19-year-old Sara and Rebekah, 14, can’t help overhearing some of these early-morning conversations.

“You feel guilty, being their kid and kind of saying, ‘Hey, I wish I could get money somewhere so I could help you out with that,'” Sara says. “You feel guilty.”

The Martins are basically healthy. But not long ago, Sara had to go to the emergency room – twice – for a locked jaw. She has health coverage through her college, but the insurer wouldn’t pay for the visits.

And last year Rebekah had to have a major operation. The bare-bones insurance policy Martha had at the time, through a part-time job at a local mail-order retailer, didn’t pay for a lot of Rebekah’s care.

The Martins don’t walk away from bills. They’ve set up payment plans with all the medical providers. It adds up to $400 a month – a substantial chunk of their income.

When Martha feels overwhelmed, Jim calms her down. For more than a decade, he’s worked at a boatyard building sleek kayaks and canoes. He makes $16 an hour.

But recently, the boatyard got new owners. They’ve cut his hours. And the company doesn’t provide health insurance for part-timers. His insurance expired August 31.

Jim Martin also works part-time at Walmart. But he’s not eligible for insurance there yet.

Being without health insurance doesn’t bother him too much, he says. To take his mind off problems he gets outside. He’s hiked most of New England’s tallest peaks.

“My grandfather dropped dead at the age of 58, but he didn’t take care of himself,” he says. “And I like to think I’m doing things better, healthy-wise, than the generation before me. And maybe that’s my insurance, is to stay active.”

But what if he had an accident? “I don’t know,” he replies. “I do possess faith in God.” He doesn’t think too far ahead, he says. “It’s just day-to-day, week-to-week, month-to-month.”

Around noon on one recent day, Martha Martin gets into her blue minivan. She’s on her way to one of her three part-time jobs – providing home help for elderly clients. She’s spent the morning at an appointment with her daughter Rebekah.

The 14-year-old has been dealing with anxiety and depression. Her mother’s been worried about the cost of counseling. But today there’s good news: A grant from the state of Maine provides free counseling for adolescents. 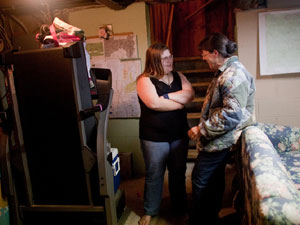 Martha talks with her daughter Rebekah. Despite her mom’s reassurance, Rebekah struggles with feeling guilty because of the cost of her medical bills. (Emilie Sommers/NPR)

At the same time, Martin is upset by what the counselor had to say.

“The counselor told me one of Rebekah’s major reasons for depression is because she feels like every time she has a medical issue it generates a bill which she knows we can’t pay,” Martha says. “I don’t remember as a 14-year-old even being aware that’s there’s bills that have to be paid. ”

Martha says she can keep her own problems in perspective, but it’s harder when it comes to Rebekah. “You always want to wave your magic ‘Mom wand,’ and fairy dust comes out and it makes life, you know, easy for them,” Martha says.

But she can’t dwell on that. After helping an elderly client with shopping, she has to report for her job at the local supermarket. She’s the helpful lady behind the deli counter who always has time to offer a free slice of cheese or bologna to a little kids who are shopping with their moms.

Martha loves her customers. But she’s 52, and after years in the food service business, these jobs are taking their toll. She has carpal tunnel syndrome, but can’t afford to see a doctor about it.

“My hands hurt, my feet hurt. You know, I’m getting older,” she says. “I’m finding that moving the slicers to clean under them and lifting the heavy things of meat [is hard]. And you know, I took this [job] because it offered insurance.”

Medical Costs Are Nearly Half Their Income

But the policy she has is very limited. It covers only her, not her family. And every time she needs care, she’s left with more bills to pay.

After her supermarket shift, Martha goes back to her little house. It’s bright pink – the exact color, she says, of Mary Kay Cosmetic’s Dusty Rose lipstick.

Martha Martin is a Mary Kay “consultant” or saleswoman. That’s another one of her part-time jobs. She painted her house pink so her customers could find it more easily. It sits at the end of a country lane.

Inside there’s an impressive collection of antique furniture and carefully displayed blue-patterned china that her parents spent a lifetime collecting. They died last year.

Martha has started selling some of these antiques to keep up with the bills. “You know, it is just stuff,” she says. “It’s emotional stuff, but it’s just stuff and not as important as the people. But, um, once it’s gone, it’s gone and I can’t get it back.”

But Martha doesn’t have much choice. More medical bills are coming. She needs to have a hysterectomy next month, and she says her insurance will pay only $1,000 of the hospital bill.

For the Martins, 2009 is starting to look a lot like 2008. Last year they paid $6,210 in health insurance premiums for themselves and daughter Sara, plus another $13,955 in uncovered hospital bills after Rebekah’s surgery.

“Forty-five percent! That’s just crazy! I don’t pay that much in taxes,” Martin exclaims. “So you know, I just think there should be a health insurance plan out there that everyone can sign up for.”

She’d be happy to pay the premiums, she says, if only she could get decent coverage.

Not Enough Insurance And Swimming In Medical Bills