GAINESVILLE, Fla. — Jennifer Webb works the deli counter at Publix supermarket and has thyroid problems. Her boyfriend, William May, is an artist recovering from colon cancer.

The couple has relied on a county program that provides health coverage to the working poor. But their “security blanket,” as Webb calls the Alachua County CHOICES program, is being taken away at the end of December. As new coverage provisions take effect Jan. 1 under the health law, local programs that offered barebones care to the uninsured are in flux – and with them, the lives of thousands who depend on them.

A few programs, like CHOICES and HealthShare in northern Minnesota, are shutting. Others, such as the Appalachian Healthcare Project in Boone, N.C., and Vita Health in Palm Beach County, Fla. are scaling back the number of people they cover. Programs in Lansing, Mich. and Houston are continuing at least for now, but their future is uncertain.

As a result, many enrollees are unsure about how — or even if –they will be able to get coverage next year and what it will cost.

“It’s a big concern,” said May, 39, who despite his low income won’t qualify for government help to buy a policy in Florida’s new online marketplace under the law. “What happens if the cancer returns? What will they do — just sweep me under the rug?”

The law’s framers had expected people like him who make less than the federal poverty level, or $11,500 for an individual, to get coverage through the health law’s expansion of Medicaid. But Florida is among about two dozen states that chose not to expand eligibility to cover everyone under 138 percent of the poverty level after the Supreme Court made it optional.

As a result, almost two-thirds of CHOICES’ enrollees will have no coverage.

“It’s a travesty because there are going to be thousands of people who are going to be stuck without any medical, dental or vision benefits,” said James Paladino, a Gainesville dentist who treats some of the program’s 4,700 enrollees.  “They are going to be left out in the cold.”

The law provides sliding-scale subsidies to help people buy private insurance only if they make between 100 and 400 percent of the poverty level, or between 11,500 and 46,000 for an individual.

Unlike her boyfriend, Webb will almost certainly qualify for such a subsidy to buy private insurance thanks to the income from her supermarket job. But even that may not be enough.  She’ll still have to pay more than she does now and worries she won’t be able to afford the monthly premiums, not to mention the deductibles – even if it buys her better care than she has now.

“It’s quite depressing,” she said at a clinic run by the University of Florida, a major CHOICES provider.

Similar uncertainty surrounds other programs in North Carolina, Texas and Michigan. They are among dozens of city and county efforts that were launched over the past two decades to provide basic coverage to the uninsured.

The programs, which cover just a fraction of the nation’s nearly 50 million uninsured, typically offer skimpier coverage than what will be offered through the law’s new online marketplaces, but require little or no cost-sharing.

The Appalachian Healthcare Project in Boone, N.C., for instance, plans to scale back coverage to about one third of its 500 members — those making 100 percent of the poverty level or less and therefore ineligible for subsidies under Obamacare. That program — subsidized by the Appalachian Regional Health System and the state and made possible by donations of time by doctors and other providers – has no premiums and $5 co-pays.

“I do have concerns people will have more of a financial burden paying for care” in the new plans, said Gillian Baker, a health system vice president who oversees the program. “But I’m also concerned that our doctors that have been so generous the past 12 years [donating their time] have a payment source.”

HealthShare, geared to employees of small businesses in the Duluth, Minn. area, just announced that it will shut its doors at the end of December despite concerns that some of its 850 enrollees will have to pay much more in the new marketplaces.

In the Houston area, the TexHealth Harris County 3-Share Plan is trying to determine if it complies with the law, said Daisy Morales, vice president of marketing. That program, which splits premiums between small employers, employees and a subsidy fund, has about 500 enrollees.

In Flint, Mich., about half the people in the Genesee

Health Plan will become eligible for Medicaid next April after the state approved expanding the program. Officials are weighing how to help the remaining uninsured buy coverage.

“Nationally, most local coverage programs will either go out of business, or serve a much more limited population if their states expand Medicaid,” said Eileen Ellis with consulting firm Health Management Associates in Lansing, Mich.

Susan Benton, 54, said Palm Beach County, Fla.’s Vita Health program has enabled her and her husband, Gary, to get care for a heart condition, diabetes, high blood pressure and other health issues for $190 a month.

She doubts she will find as good a deal in the exchange, even if the new policies have more benefits.

But the Bentons may not have the option to stay in Vita Health long term.

“We do not want to be duplicating anything that is available from the federal government,” said Ron Wiewora, CEO of the Health Care District of Palm Beach County, who said the program will attempt to shift most enrollees into the exchanges. A freeze on new enrollees takes effect Oct. 31. 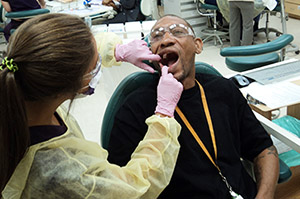 James Ray Markham, 39, of Gainesville, Fla., gets dental treatment at the ACORN Dental Clinic in Brooker, Fla., from Courtney Elixson, who is studying dental hygiene at Sante Fe College in Gainesville.

In Alachua County, Fla., where one in five residents is uninsured, political support for the CHOICES program has waned even as enrollment grew. Residents approved a 0.25 percent tax to pay for it in 2004 by a mere 84 votes.

But for enrollees, it has been a lifeline. They talk about paying

$10 for dental exams, cleanings and fillings at the ACORN Clinic, a nonprofit medical and dental clinic about 20 miles north of Gainesville, amid fields planted with cotton and watermelon.

They worry that plans sold through Obamacare won’t be as affordable – or include adult dental or vision coverage.

James Ray Markham, 39, has been able to get his teeth cleaned since he joined, and is planning to have outpatient hemorrhoid surgery.

Asked about his options next year, Markham, a manager at a Dollar General distribution center, appears at a loss.

“No one really knows what it will mean,” he said.