GRUNDY, Virginia — Sandra Cook got in line midday on a recent Friday for dental care that she wouldn’t receive until the next morning. Hundreds more like her showed up at Riverview Elementary and Middle School here, many planning to spend the night, just as buses brought kids home and volunteers arrived by the hundreds to turn the school into a makeshift dental, eye and medical clinic run by Remote Area Medical, a nonprofit charity program.

Many people in this southwestern corner of Virginia struggle to pay for everyday needs and that includes basic health care.

“My teeth and my eyes are really bad,” said Trey Justice, who walked five hours to reach the school and set up a tent to spend the night. “I got ran over about four years ago. Nothing but pins all over [my body]. Don’t have no doctors, no insurance.”

The decision by states like Virginia not to expand Medicaid and the lack of dental and vision coverage even for those with insurance have meant that the demand for RAM’s free mobile clinics has stayed strong.

On Saturday morning, the sun had yet to rise when RAM founder Stan Brock called the first wave of patients into the pop-up clinic.

Brock founded the charity care program in 1985 to bring health care to people in developing countries. But he expanded the project to the U.S. when he realized the depth of the need here.

The torrent of patients is a measure of the poverty and isolation in this rural area: 15 percent of adults are uninsured; one in five live in poverty; and the unemployment rate is more than double the state average.

Over the weekend, nearly 1,000 teeth will be pulled, some 400 pairs of eyeglasses made and more than $1 million in health care services delivered.

Gary Owens, a laid-off coal miner who is uninsured, tells the volunteer doctor that his hands feel numb, his feet burn and old job injuries plague him.

At 55, Owens has paid out of pocket in the past for health care but he’s been unable to afford the blood tests to figure out what’s wrong with him. The doctors here worry the reason he recently lost 25 pounds is that he might have cancer.

If Owens lived just a short drive away in Kentucky or West Virginia, he’d be eligible for Medicaid. 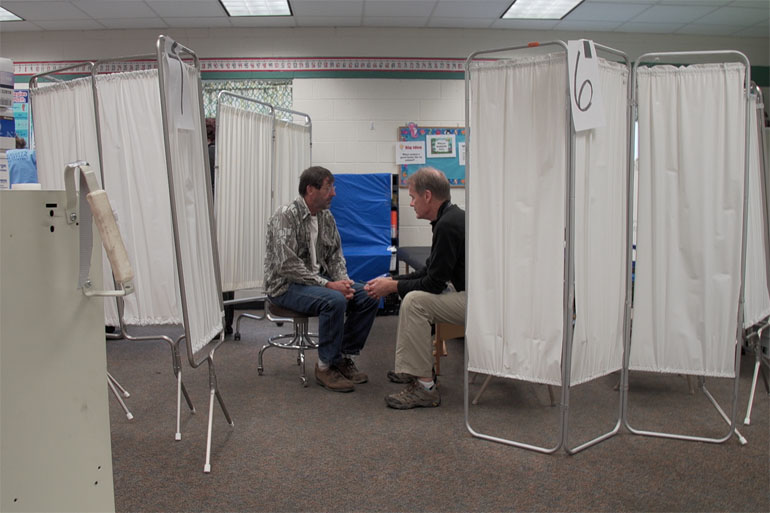 State lines are now often the difference between poor people having health insurance or not. After Kentucky expanded Medicaid under the Affordable Care Act, the percentage of uninsured poor adults dropped from 40 percent to 23 percent in one year.

But in Virginia, which hasn’t expanded Medicaid, many low income adults are still left to rely on charity care, and Remote Area Medical is the most visible and dramatic.

Studies have found that people in Medicaid expansion states are more likely to have a regular doctor, get vaccinated and receive treatment for chronic diseases. But in states like Virginia, uninsured poor adults often must turn to the emergency room when they need help.

Doreen Facey-Biggs, a nurse volunteering for the weekend-long charity clinic who is originally from Jamaica, says the choices people face seem at odds with America’s standing in the world. “I’ve been in this country a long time, but I’m still amazed at the differences and the disparities in health care services,” she said. “That in this rich country, this first-world country, so many people have no insurance.”

That’s the case for James Love. He lives along a mountain road with his wife and two adult children, tending to his animals and working multiple jobs to pay the bills.

No one in the family has health coverage, and Love relies on the RAM events each year for nearly all of his dental and vision care.

Love has to make tough choices when it comes to paying for medications for high blood pressure, high cholesterol and nerve pain in his legs. “You choose what you can afford,” he said. “You not only have to do it for you, your wife, your children, sometimes your grandparents, your parents.”

The dismal health conditions here are not new. President Lyndon B. Johnson toured Appalachia in 1964 and declared a “War on Poverty.” But a half century later, widespread poverty persists, accompanied by diseases linked to it. Diabetes, heart disease and stroke are endemic, and smoking and cancer deaths far exceed national levels. Despite a downturn in coal production, miners are still afflicted with black lung disease and serious injuries.

But the most common complaints at RAM clinics are painful, rotting teeth. 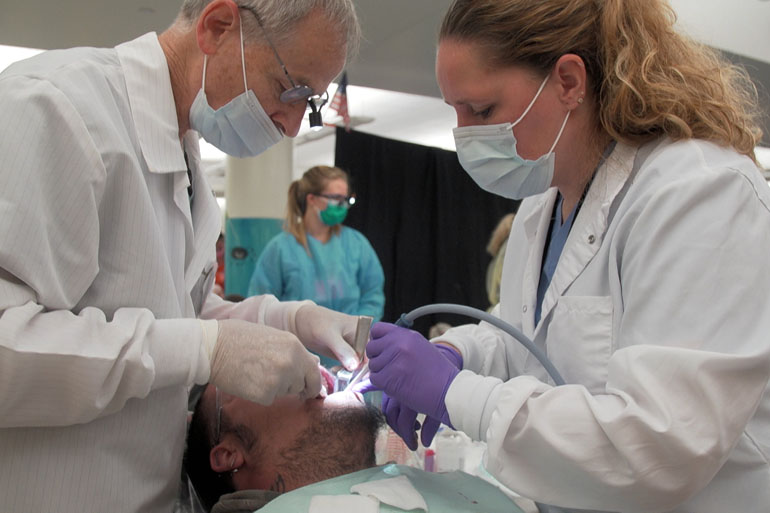 The lack of dental and vision coverage even for those with insurance means demand for Remote Area Medical’s free mobile clinics has stayed strong. (PBS NewsHour)

Brock says his pop-up clinics around the country continue to overflow because the ACA and public insurance programs don’t cover dentistry. “It was a step in the right direction, but it missed out on the thing that really leads to a lot of problems. Heart disease, diabetes, and so on, all emanate from things like bad teeth,” he said.

But it’s not just the lack of insurance. Poor health habits and poverty lead to widespread dental problems.

“Most products that they can buy are usually the worst for you,” said Dr. Terry Dickinson, head of the Virginia Dental Association and a longtime volunteer. “The highly processed foods, the highly sugared drinks, all of those things are not good for you either health wise or dental wise.”

“It makes it very difficult to break into that cycle,” Dickinson adds, “because it’s economic, it’s culture, it’s everything.”

Young people like Jesse Charles are an example of why that cycle is hard to break. He has no job, no health insurance. He went to elementary school here and started smoking when he was eleven. He’s 21 now and fairly healthy but he’s taking part in a rite of passage — getting a tooth pulled at a Remote Area Medical event.

The dentist warned him that smoking after dental surgery is dangerous, but on the way home, he quickly reaches for a cigarette.

His family has been roiled by the recent deaths of his mother and uncle, and he wishes he had followed their advice.

“They told me to take care of my teeth,” said Charles. “I never did listen.”

Dickinson worries that the entire weekend of medical care is simply a stop gap. “I think about that a lot on the way home,” he said. “I’m thinking, ‘So what did we do?’ Because our goal is to stop the cycle, to do something that’s sustainable. But we’re the Band-Aid, we’re the safety net until that happens.”

When the volunteers leave town on Sunday, it’s up to free clinics like the Health Wagon in nearby Wise, Virginia to try to scrape together follow-up care.

“People like me are here begging and saying, ‘I need somebody to see this patient? She needs a breast biopsy,’” said Paula Hill-Meade, a nurse practitioner and the Health Wagon’s clinical director. “A lot of times it’s just, ‘No. Can she pay this much up front?’ Well no, she can’t.”

Hill-Mead is angry at Virginia state lawmakers who have blocked the Medicaid expansion. “It really makes you mad, and it makes you infuriated to see that they’re up here using this as a political game,” she said. “It’s sickening to think that you’re dealing with people’s lives like that.”