When Samuel Alcocer arrived at the reception desk of a North Minneapolis clinic with a swollen cheek in 1996, he was desperate for relief. 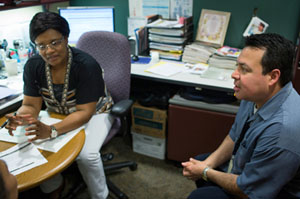 One of his wisdom teeth had erupted into a throbbing, painful ache.

At the time, Alcocer, a native of Santa Cruz in the Mexican state of Guanajuato, spoke no English. No one at the clinic spoke Spanish. So he and the receptionist resorted to gestures, to little avail.

“[I was] pointing hands to my face,” said Alcocer, who remembers the day vividly. “And the lady at the front desk [was] just moving her arms, like ‘What do you want me to do?'”

Seventeen years later, Alcocer helps to make sure others don’t have a similar experience, working as a Spanish interpreter at the same clinic in Minneapolis, now called NorthPoint Health and Wellness Center.

While Latinos comprise only about five percent of Minnesotans, they are a big part of the state’s uninsured population. One in eight Minnesota Latinos lacks health insurance.

That makes Latino communities a likely focus for efforts prompted by the federal health law to reduce the number of people lacking health coverage. NorthPoint, which is a federally qualified health center, received a $151,000 grant this week to hire workers who will help people sign up for insurance coverage in the state’s new exchange, MNsure.

For Acolcer, interpreting for Spanish-speaking patients and English-speaking health care workers has been a calling.

Alcocer’s tenure as a NorthPoint interpreter began 10 years ago as temporary project with funding for six months. On his first day, he was given an office, a desk, a computer, and a phone and was told he’d get a call if needed. But instead of sitting in his office and waiting, Alcocer did what he wished someone else had been doing when he arrived there the first time.

“I went and sat in the lobby waiting for anybody to show up and say, ‘Welcome. Thank you for coming. How can I help you?'” said Alcocer.

The funding for his position was extended, and after eight months, Alcocer needed help, so the staff expanded. There are now eight full-time and five part-time Spanish-speaking interpreters at NorthPoint, as well as interpreters who speak Hmong, Laotian and Thai.

Alcocer said that kind of one-to-one interaction is what many people will need to understand the new federal health care law’s requirements and benefits. Radio, TV or newspaper ads in English, he said, won’t be enough.

Eva Sanchez of Portico Healthnet agrees. Sanchez, a native of Morelos, Mexico, has been working in Minneapolis helping Spanish-speaking families navigate the health insurance landscape for more than five years. She has an office in the Andersen United Community School located in the heart of one of Minneapolis’ most vibrant Latino communities.

Sanchez said health insurance itself can be a foreign concept for Latino immigrants, particularly if they grew up in a small town as she did. People may have no experience filling out health insurance forms because there was no health insurance. Patients pay the doctor at the visit.

“If it’s already difficult for people from here,” Sanchez said. “Imagine how hard it will be for other people.”

Other immigrant advocates say the new federal health care law has a mixed message for immigrants that makes it harder to convince some Latinos to enroll in health plans.

The law includes a mosaic of restrictions on immigrants. Even people who are legally entitled to be in the United States are subject to a five-year waiting period before they’re eligible to enroll in Medicaid. In addition, the law bars anyone who entered the country without authorization from receiving the health care law’s benefits.

People who work with immigrants say the law’s mingling of health and immigration policy can stoke fears about being deported.

“There’s no question that the politics that has mixed immigration policy with what I think should be public health policy has made the job much harder,” said Daniel Zingale, senior vice president of the Los Angeles-based private health care foundation, The California Endowment.

California, which has more uninsured residents than many states have people, started trying to navigate those crosscurrents before most states. Latinos make up 59 percent of its uninsured.

The California Endowment has partnered with Spanish-language media giants such as the Telemundo and Univision networks to explain the new law. According to two polls, Latino support for the federal health care law in California rose from 46 percent in April 2010 to 70 percent in Jan. 2013.

Officials with MNsure, Minnesota’s new health insurance marketplace, say they will be advertising in ethnic newspapers, translating their educational materials into Spanish, Hmong, and Somali and sending staff members to events in diverse communities to explain insurance.