The penalty for failing to have health insurance is going up, perhaps even higher than you expected.

Among uninsured individuals who are not exempt from the Affordable Care Act penalty, the average household fine for not having insurance in 2015 will be $661, rising to $969 per household in 2016, according to a Kaiser Family Foundation analysis. Individuals will pay the penalty when they complete their federal taxes the following spring. (Kaiser Health News is an editorially independent program of the Foundation.)

Millions of people are exempt from the penalty because they either don’t make enough income to file taxes – for single people in 2014, that was $10,150 — or can’t find affordable coverage.

About 7.5 million people paid an average of $200 in penalties for failing to comply with the individual mandate in 2014, according to the Internal Revenue Service.

According to Kaiser’s analysis, 3.5 million uninsured people eligible for subsidized federal health law plans could buy a bronze plan that would cost nothing in premiums or less money than the penalty for 2016.

The mandate, a linchpin of the law, is also the least popular component of Obamacare. 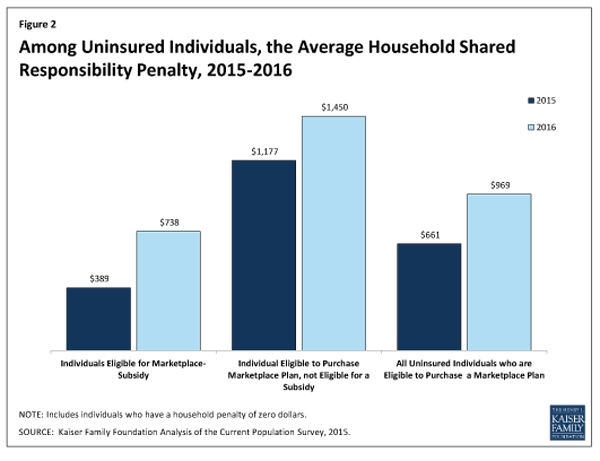