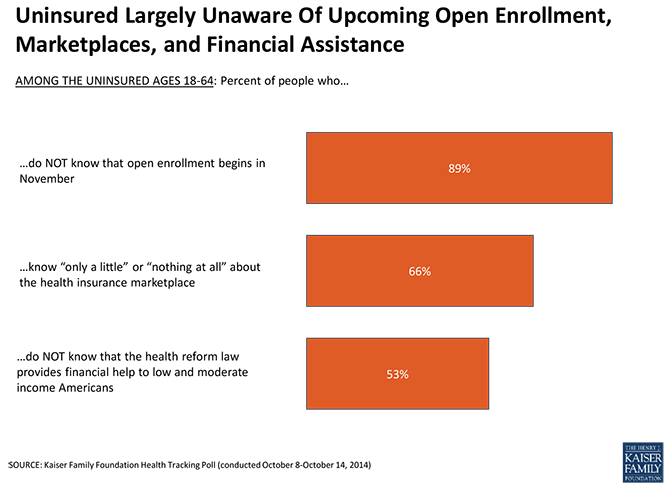 Almost nine of 10 uninsured Americans – the group most likely to benefit — don’t know that the law’s second open enrollment period begins Nov. 15, according to a poll released Tuesday. Two-thirds of the uninsured say they know “only a little” or “nothing at all” about the law’s online insurance marketplaces where they can buy coverage if they don’t get it through their jobs. Just over half are unaware the law might give them financial help to buy coverage, according to a new poll.

Despite that lack of awareness, nearly 60 percent of those uninsured people say they plan to get coverage in the next few months, including 15 percent who say they’ll get it through an employer, 15 percent who say they’ll purchase it themselves and 8 percent who expect to get it through Medicaid. One in five respondents in the latest monthly tracking poll by the Kaiser Family Foundation say they expect to get coverage but they’re not sure where. (Kaiser Health News is an editorially independent program of the foundation).

The poll found that most of those who expect to remain uninsured say they don’t think they can afford coverage (18 percent) or don’t want to be forced into buying a plan (12 percent).  Three percent say they would rather pay the fine than pay for coverage.

Political prognostications earlier this year that the Affordable Care Act could be pivotal in the midterm elections have proven largely untrue. While about 6 in 10 voters say they’ve seen ads trying to influence their vote, 27 percent said the health law will be “extremely” important and just 8 percent picked it as the most important issue. Ranking higher were the economy (16 percent), dissatisfaction with government (12 percent) and education (10 percent), among other issues.

Status Quo On Opinion Of Obamacare

The poll found little change in the public’s view of the landmark law, with 43 percent viewing it unfavorably and 36 percent favorably.  That gap, however, has decreased since July when the rate of those expressing unfavorable views was 53 percent. Public opinion of the law is at about the same level  it was a year ago as the first open enrollment period began.

Just over half of Americans – 56 percent – say the law has had no direct impact on their families. For those who say the law has had an impact, more (26 percent) say it has hurt them than helped (16 percent).  Republicans are most likely to say they have been hurt by the law (48 percent) while Democrats are more likely to say they have been helped (28 percent) and independents fall in the middle.

Across party lines, the health law ranks fourth as voters’ most important issue for Democrats, Republicans and independents. Nearly two-thirds of the public — 64 percent– would rather see their congressional representative work to improve the law than repeal and replace it — 33 percent favor that.