It’s a job where stress mounts like dollars on a taxicab meter. The hours are long, the wages are low, and the competition for customers is often fierce. 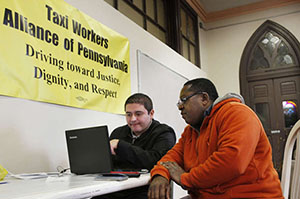 Toss in an eat-on-the-go, fast-food diet, little exercise, a sore back and achy joints from jockeying through traffic all day and you start to grasp the health burdens Philadelphia cabdrivers face.

“It’s a high-stress job,” said Ronald Blount, president of the Unified Taxi Workers Alliance of Pennsylvania, which represents 1,200 of the city’s 5,000 cabdrivers.

Until recently, the price of an individual plan was unaffordable for most Philadelphia hacks, who make $350 to $400 per 70-hour work week. But now the union, with help from Enroll America and Healthy Philadelphia, is heading a drive to get the city’s cabbies signed up via the Affordable Care Act marketplace.

“We felt this was a perfect opportunity for drivers,” said Blount, 54, who has been carting people around the city since 1980. “For a lot of drivers, this is the first time they will have health insurance.”

Since starting its push in December, the union has signed up 750 cabdrivers. It has also begun helping cabdriver groups in other cities replicate its success.

“No other taxi organization is doing this kind of work,” said Mohammad Shukur, the union’s senior vice president.

Getting the campaign off the ground is hard work. Blount wants all drivers, not just union members, to know that affordable insurance is available. So the union uses word of mouth and text messages sent by the Philadelphia Parking Authority’s GPS system to in-cab monitors to alert drivers when navigators are available at the union office in an old church at 4221 Chestnut St.

“I tell drivers to come here because we do a very good job,” said Shukur, of Upper Darby, who has been driving for 12 years. “There is a huge demand.”

Some of the drivers who went to the early sessions had tried but failed to sign up on their own. They needed help from navigators to buy a plan. But most taxi drivers know little about the ACA.

“A lot of drivers were not computer-literate,” Blount said. “Even the basic stuff. They needed an e-mail address, and we had to walk them through the application.”

Then there is the language issue. The union represents drivers from more than 40 nations. That means dealing with 40 languages, customs, cultures, and religions.

“We always have people here who can speak the languages,” said Shukur, 45. “We have navigators on each of the computers and they sit down and help. Within 35 minutes, they are finished.”

Drivers who complete the application but don’t buy a plan are asked to write their name and phone number on an Enroll America postcard. A worker then follows up to make sure the drivers get covered.

“People are very happy with the insurance they receive,” Shukur said.

Blount estimated 80 percent of the drivers the union had enrolled qualified for a subsidy. Some drivers are paying a premium of just 14 cents a month; others have locked up policies for $35 to $70 a month. Blount said they caution every driver not to choose a policy based solely on the monthly premium but to look at such factors as doctor and hospital networks, drug costs, and deductibles.

“We tell them that they have to look at the whole picture,” said Blount, who lives in North Philadelphia. “What we are trying to do is steer them to the preferred provider organization plans that give them more options.”

Blount said the union would host sessions every Wednesday, Thursday, and Friday until open enrollment ends on March 31. He wants every driver to be able to get a yearly checkup.

“We are trying our best to enroll all of them. This is a great opportunity.”