Even if UnitedHealth Group isn’t your insurance company, there’s a good chance it touches you in some way. The $100 billion behemoth sells technology to hospitals and other insurers, distributes drugs, manages clinical trials and offers continuing medical education, among other things, through the growing web of firms it owns. 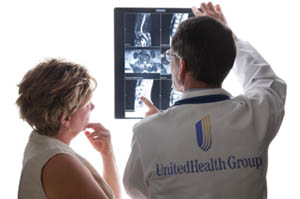 Now, that touch could get a lot more personal.  United’s health services wing is quietly taking control of doctors who treat patients covered by United plans in several areas of the country — buying medical groups and launching physician management companies, for example.

It’s the latest sign that the barrier between companies that provide health coverage and those that actually provide care to patients is crumbling.

Other large insurers, including Humana and WellPoint, have announced deals involving doctors in recent months, part of a strategy to curb rising health costs that could cut into profits and to weather new challenges to their business arising from the federal health law. But United is the biggest insurer by revenue, making the trend much more significant.

Many patients insured by these companies are going to see much tighter management of their care.

“Health care costs are still going to rise,” said Wayne DeVeydt, chief financial officer of WellPoint, which entered the business of running clinics in June with the announcement that it would acquire CareMore, a health plan operator based near Los Angeles that owns 26 clinics. “But the only way to stem those costs in the long term is to manage care on the front end.”

That means enlisting doctors. Their orders drive most health care spending, including the wasteful share: treating heart patients with expensive stents when cheaper drugs might work, or overusing high-tech imaging devices, for example. By managing doctors directly, insurers believe they can reshape the practice of medicine – and protect their profits.

For instance, CIGNA, another large insurer, saves 9 percent on patients treated by doctors in a Phoenix medical group it controls, said Stephanie Gorman, president of CIGNA Arizona. CIGNA has expanded the group over the last 18 months in response to the health law, and it now serves patients at 32 locations.

That thought unnerves consumer advocate Anthony Wright of Health Access in Sacramento, Calif., who worries profit pressure could affect care decisions. But Wright also said there may be upsides to more tightly managed care: “No patient wants to get more procedures than they actually need.”

Insurance companies are pursuing doctors in response to increasing financial pressure. The health law cuts government spending on private Medicare plans that many insurers offer, imposes rules that could limit profits, and increases scrutiny of their rates. Adding to the pressure, the insurers’ customers are tired of rising prices.

Employers and other customers “are saying, I want more value for the dollars I spend in health care,” said Dawn Owens, chief executive officer of OptumHealth, United’s health services subsidiary. But, “there’s also a realization that the delivery system isn’t ready for that kind of change. That’s where we come in.”

The tools needed to control costs and improve care are things insurers have “invested in over the years,” she said. “The provider community doesn’t have those tools.”

United’s strategy has stirred little controversy, in part because few are aware of it. But word is getting out among potential competitors.

Dr. Amir Bacchus, chief medical officer of HealthCare Partners of Nevada, a large physician group, said he learned about United’s plans in a phone call from a United recruiter. He was asked if he’d be interested in joining the company to manage 500 doctors at a network of clinics United planned to build around the country, one part of its physician strategy.

By adding physicians in some places, United “can definitely control the health system” in those areas, said Bacchus, who declined United’s overture. “It’s a threat for us,” he added. “They are going to compete directly with our business model.”

Gail Wilensky, a United board member and health official in President George H.W. Bush’s administration, said the insurer doesn’t seek to control every doctor who sees patients enrolled in its health plans. Typically, insurers contract with doctors to care for their policyholders. She also cautioned the strategy has not yet proven its success and is in its early stages.

“It’s just trying many different ways to see what appeals to the American public and what adds value,” she said. “Whether it will actually mark the trend of the future, I don’t know.”

Rigg, the Wall Street analyst, said that the announced deals were “not needle movers yet” for investors. But four of the five largest health insurers have increased physician holdings in the last year. In addition to the moves by WellPoint and CIGNA, Humana acquired the urgent care chain Concentra in December. Aetna, the third largest insurer, will not be joining the trend, its chief executive, Mark Bertolini, said in an April interview.

Nonprofit Highmark, which runs BlueCross BlueShield plans in Pennsylvania and West Virginia, also struck a deal last week laying the groundwork for it to acquire West Penn Allegheny Health System, a Pittsburgh-based chain of six hospitals. Other regional insurers, especially those specializing in private Medicare plans, such as Peoples Health in Louisiana, have bought or developed clinics over the last year.

Optum brings technology, data and population health skills to physician groups it acquires, said Owens, the CEO: “We help them modernize the way medicine is actually practiced.” Some of the deals were initiated by doctors’ groups looking for help, she added.

Owens said Optum’s deals will serve all the players in the health system, including rival health plans whose policyholders may use the same physicians.

In Phoenix, Collaborative Care launched Lifeprint, a physician network that serves United’s private Medicare plans. And in Texas, Collaborative Care acquired an 80 percent stake in WellMed Medical Management, which runs a medical group with clinics in Texas and Florida, according to filings with state insurance commissioners.

United has also ramped up hiring at a Las Vegas medical group it already owned as the result of its 2008 acquisition of health plan operator Sierra Health Services.

In some cases, the company obscured its role. For instance, another Collaborative Care business, NextDoor Health, which is partnering with a local doctors’ group to open retail clinics at Wal-Mart stores in Texas and other states, describes itself on its website only as “a privately held LLC based in Minneapolis.” United is based just outside of Minneapolis.

Paul DeMuro, a Calif.-based Latham & Watkins attorney who represents physician practices, said one reason companies keep physician deals quiet is that, as is the case with real estate developers, news of a big project can inflate prices. The prices for doctors’ practices are already “absurd,” he said.

Insurers managed physician practices before, especially in the 1990s. But customers rejected those tightly managed plans. Some local plans, and larger insurers such as Kaiser Permanente, continue to employ practicing doctors. But the biggest national insurers shed such arrangements.

One reason the strategy makes sense now is that the health law could reward such arrangements. The law envisions so-called accountable care organizations, groups of doctors and hospitals that take responsibility for patients and the financial risk that comes with them. If they cut spending, they would keep some of the savings.

While hospitals are widely seen as the natural leaders of ACOs, United’s strategy positions it to lead the new systems, too, a company executive acknowledged.

Some observers watching the developments say the health law, which in part was sold as a way to rein in insurers, has had the opposite result, opening the door for the companies to take control of even more parts of the health system.

“There’s a gigantic Murphy’s law emerging here,” said Ian Morrison, a California-based health care consultant who does some work for United, as well as most of its competitors. “The very people who were the demons in all of this, that the public can’t stand” – managed-care firms – “are the big winners.”