Some 10 million Latinos stand to gain health insurance under the Affordable Care Act, and the Spanish-language media network Univision is positioning itself as a direct path to this potentially lucrative market.

WellPoint and other Blues insurers in six states including Florida have signed deals with Univision for undisclosed sums to be the exclusive health insurance sponsor of the network’s Peabody-award winning health initiative, “Salud Es Vida,” which means Health Is Life.

The deals include a special plan-sponsored Univision website that will be able to connect Latinos with coverage on the online markets, or exchanges, that will serve individuals beginning in October. But it’s a path that could take a detour around some competitors who are offering plans: because of a little-known rule proposed by the administration in June, customers will be able to buy their subsidized Obamacare insurance directly from the insurer.

The rule allows a customer to be sent briefly to a special section of the federal or state-run marketplaces only to see if their income qualifies them for subsidized coverage, and then can go right back to the WellPoint or Blues site to buy their coverage. These customers may not necessarily see the other options for insurance available on the exchange, and the other plans may cost less or include a wider provider network.

WellPoint, which owns for-profit Blues plans in 14 states, recently bought into the Univision partnerships in California, New York, Colorado and Georgia. Two nonprofit plans have also signed Univision partnerships: Horizon Blue Cross Blue Shield of New Jersey, and Florida Blue. Additional carriers are expected to take up the opportunity in other states as the industry ramps up for Obamacare open enrollment that begins Oct. 1.

Steve Mandala, Univision’s executive vice president of sales and marketing, says that any insurer material on the plan-sponsored sites will be clearly labeled as advertisements or sponsored content and will not impact the editorial independence of Univision’s news coverage.

He adds that Univision is also working on arrangements with other insurers to sponsor additional ACA content outside of their hallmark “Salud Es Vida” campaign, and he expects visitors to the WellPoint-sponsored Health Insurance Center will also be looking elsewhere for insurance information. A fact sheet released by Univision following Kaiser Health News’ questions on this story says the sites will also link to the government sites such as, healthcare.gov and coveredca.com.

But, Mandala adds, “We are a for-profit business, and we feel we have every opportunity here to offer any insurer” advertising packages.

The deals are one of the most concrete ways to date that insurers have invested in the marketing of Obamacare, but they also could skirt a key principle of the law: that it should foster insurer competition and consumer choice.

“The initial concept that we had for the Univision health insurance center is for it to feel as though you’re walking into a Florida Blue retail center,” says Steve Snell, vice president of enterprise marketing for Florida Blue. “Our goal first and foremost is awareness. A lot of folks who are currently uninsured may never have signed up for insurance before.”

The site will have basic information about how health insurance works, and will also have a “shop our plans” section that will allow consumers to toggle directly over to a Florida Blue site in Spanish, where they can purchase coverage.

Over the past year, Florida Blue has doubled its spending on media targeted to Hispanics, a demographic that Snell says is crucial to their membership and growth objectives. And the Univision partnership is a key part of their outreach. During prime time hours, Univision gets nearly three-quarters of the Spanish-language television audience. In one week in July, it beat out all other networks for viewers under age 50 — leading the network to adopt the tagline “Número Uno is the new Number One.”

Latinos tend to be younger than the general population, so they are just the sort of consumers that insurers (and the Obama administration) hope will sign up. Because young, healthy people need fewer medical services, insurance companies can use their premiums to balance the costs of care for older or sicker patients.

“If I were Health Med or Kaiser Permanente or any of the other health plans, I might think, ‘Wow, we just got out-maneuvered,'” says Daniel Zingale of the California Endowment, a Los Angeles-based foundation that has given Univision $20 million for a separate ACA campaign, in reference to the WellPoint partnership in California.

Consumer advocates had a mixed reaction to the rule and the Univision deals.

“We want the plans to compete by being the best value for the consumers, not by capturing that consumer early in the process and preventing them from seeing what their options are,” says Lynn Quincy, a senior policy analyst at Consumers Union.

But the challenge to sign qualified people up for insurance is a daunting one, other advocates say.

“We really do need any boot on the ground. At the end of the day, the government will never have the money to have the kind of media campaign we need, so we need the carriers to get involved,” says Elisabeth Benjamin, an advocate at the Community Service Society of New York.  She says her organization and other groups working on consumer outreach can use all the help they can get to spread the word about the ACA. “My hat’s off to WellPoint — it’s very clever.”

In addition to the insurance sales, WellPoint, Florida Blue and Horizon BCBS will be the sole health insurance sponsor of Salud Es Vida in their respective states, which includes programming on television, radio and online.

They will also be the exclusive sponsor for a series of health newsletters that are distributed to a database of millions of Latinos. The database has some detailed health information people provided as they signed up for the newsletter, including whether or not they have  insurance and if they suffer from conditions such as diabetes, hypertension and obesity.

“Univision has a fundamentally different relationship with our viewers,” says Mandala.  “This is a population that needs orientation of how to make their lives the best they can be.” Univision tries to do that by providing public health tips, diet tools, a diabetes newsletter and a pharmacy discount card.

Much of Univision’s digital health content is created and owned by a privately-held Hispanic health information and advertising company called HolaDoctor, which is also managing Univision’s new relationships with health insurers. In a sales section on HolaDoctor’s corporate website, the company promised insurers that the new exclusive partnership arrangements will “leverage the Univision brand to position your health plan as the preferred health insurance company for Hispanics in your service area.” That section of the website was taken down shortly after KHN interviewed executive vice president Dirk Schroeder at HolaDoctor.

The removed web page said that HolaDoctor will create a special health insurance center on the Univision website that will be “customized for your health plan, and localized for your service areas.” It promised to offer basic information about health insurance “and will also have access to your sales assets integrated within the Center (e.g., Shop Our Plans). Consumers will be qualified for health insurance with interactive tools and motivated to contact your call center or shop online.”

The goals, according to HolaDoctor’s corporate website, are to “generate online sales through your website, encourage shoppers to choose your health plan in the Healthcare Exchanges,” and “to increase Hispanic membership by building trust in your health plan.”  Neither WellPoint not HolaDoctor would discuss how much was paid for the sponsorship arrangement.

Lisa Rubino, a senior vice president at Molina Healthcare, Inc., which is also offering health plans on the California and Florida exchanges, says she’s not overly concerned about other plans having exclusive sponsorship arrangements with Univision.

Enrolling Latinos in coverage is about “more than just a media position,” says Rubino. Molina already has a majority Latino customer base in California. The company’s strategy is to focus on engaging with community partners such as churches, schools, markets and physicians — the trusted advisers that Latinos generally go to for help with coverage.

Ultimately, she says, the real competition is going to be on price and network, not who has the best media buy. “When it comes down to actually enrolling, there are relationships that have been established for years beyond WellPoint and Florida Blue,” Rubino says.

Consumer Union’s Quincy says that despite her concerns, partnerships between insurers and other private companies like Univision may be inevitable. “Someone got into the insurance market and yelled, ‘Free money! New demand!’ They’re all trying to figure out how to be the place where people spend their tax credit dollars,” she says. 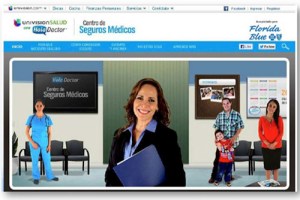 Univision Obamacare Deal Could Put WellPoint, Blues Ahead Of Competitors