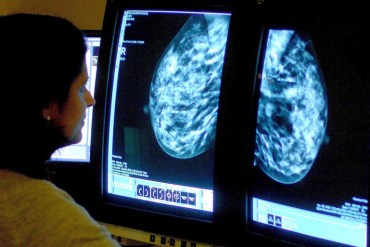 A consultant analyzes a mammogram in this file photo. (Photo by Rui Vieira/PA Wire for AP)

The updated guidelines, which were published in the Journal of the American Medical Association this week, recommend that women who are at average risk for breast cancer start annual mammograms at age 45 and continue until age 54, then reduce screening frequency to once every two years. They should continue on that schedule as long as their life expectancy is at least 10 years. The ACS also no longer recommends that women receive manual clinical breast exams.

The previous guidelines, which had been in place since 2003, recommended annual mammograms and clinical breast exams starting at age 40 for women who were at average risk.

The update was two years in the making and reflects the society’s current thinking based on an analysis of existing science and changing technology, among other things, says Kirsten Sloan, the ACS Cancer Action Network senior director of policy. The society concluded that even though women in their early 40s can benefit from breast cancer screening, they are more likely than older women to get false positive results, which can lead to unnecessary — and sometimes harmful — additional testing and procedures.

The new guidelines on their own likely won’t change insurer and employer decisions regarding coverage of screening for breast cancer, experts agree.

Under the health law, health plans are required to cover preventive services that are recommended by the U.S. Preventive Services Task Force, a nonpartisan group of medical experts, without charging consumers anything out of pocket. The only exception is for plans that have grandfathered status under the law.

The new ACS guidelines now more closely align with the task force’s recommendation to start screening at age 50. However, both groups’ guidelines also say some women may choose to be screened earlier than the recommended age — but that the decision should be an individual one.

“In most cases, health plans are already covering mammograms for women age 40 to 50 when recommended by a doctor,” said Clare Krusing, a spokeswoman for America’s Health Insurance Plans, an insurer trade group, in an email.

Health plans examine medical guidelines and evidence from a variety of sources when developing coverage rules.

“The recommendations will give plans a different framework for evaluating those coverage decisions moving forward, particularly if more and more doctors, providers [and] researchers release recommendations that align with those coming out from the ACS,” says Krusing.