When Emily Auerswald and her children need care for minor illnesses or injuries, they head to a shopping center near Annapolis, Md. that has a Starbucks, a Five Guys hamburger joint and an urgent care center. 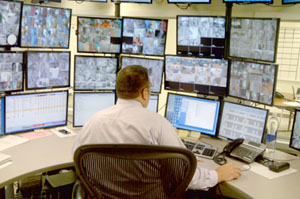 From a command center in Crofton, Md., an employee tracks all Righttime centers via cameras set up at front desks and in hallways to check how long people have been waiting (Photo by Phil Galewitz/KHN).

Doctors Express in Edgewater is open nights and weekends, and accepts walk-ins without an appointment.

“I have a doctor, and my kids’ pediatricians are great, but we’d prefer not to have the long wait in the office. So we come here and everything seems so much faster,” said Auerswald, 36, who was having a doctor remove the stitches he had put in her foot after a weekend boating accident.

Such centers treat the most common injuries and illnesses – including colds, ear infections, cuts and back pain – in addition to taking X-rays and performing simple blood, urine and drug tests.

And they are booming: An estimated 3 million patients visit them each week, according to the Urgent Care Association of America.

Since 2008, the number of facilities has increased from 8,000 to 9,300 — and that’s not counting smaller and more limited walk-in clinics in pharmacies and big-box stores such as Target and Walmart.

Some physicians groups warn that the overreliance on the centers can complicate efforts to improve health through better coordination of care.

If a teenager comes in with lacerations, for instance, a family doctor might broach the subject of alcohol or drug use, he  said. Similarly, a series of seemingly minor illnesses might indicate a larger, less obvious problem. 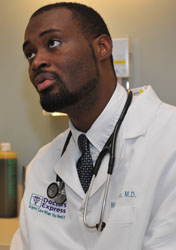 But consumers seeking to avoid long waits in emergencies rooms and grateful for more convenient evening and weekend hours are driving a steady growth in urgent care centers.

Rick Morani, owner of the clinic near Annapolis, said he bought the Doctors Express franchise — one of 54 nationwide — because he expects the growth curve to look “like a hockey stick.”

Many urgent care centers are stand-alone doctor’s offices, sometimes called “doc-in-a-box” locations. But much of the recent growth has come from chains, said Tom Charland, chief executive of Merchant Medicine, a Minnesota consulting firm that tracks the industry.

Concentra, the nation’s largest chain, has 324 centers, including 14 opened in the last nine months.

“There’s plenty of funding out there from private equity people who feel this is the next gold rush,” said Robert Graw Jr., the chief executive of locally based Righttime Medical Care, which has nine centers in Maryland and is planning new ones in Maryland and in Virginia.

Growth is expected to increase even faster in 2014, when the Affordable Care Act starts to bring health-care coverage to as many as 30 million Americans, many of whom do not have regular doctors, said Charland.

While urgent care centers typically offer hundreds of medical services, they do not perform surgery and are not equipped to deal with life-threatening emergencies. In most cases, a doctor is on site, although care may be provided by a nurse or physician assistant who is also on staff. Many centers are busiest in the evenings and on weekends, when most doctors’ offices are closed.

In the past, at least some of the patients who now go to urgent care centers would have ended up in hospital emergency rooms. While the typical $100 visit to a center is comparable in price to a visit to a doctor’s office, an emergency room visit can cost more than twice as much. A 2010 Rand Corp. study found that almost one in five visits to hospital emergency rooms could be treated at urgent care centers, potentially saving $4.4 billion annually in health-care costs.

The lower costs have drawn the attention of insurers. Many have added urgent care centers to their provider networks, and one has gone a step further. Humana, in 2010, purchased Concentra.

Even hospitals have jumped in, adding their own urgent care centers. In July, for example, Dignity Health, the nation’s fifth-largest hospital system, bought U.S. HealthWorks, the second-largest urgent care chain, with 147 centers.

Inova Health System, in Northern Virginia, has four urgent care centers and is looking to add a fifth.

“Strategically, we want to be able to provide better access for patients in our market where there are shortages of doctors,” said Loren Rufino, director of business operations for Inova’s ambulatory services division.

Diantrey Thompson, 26, of Glen Burnie, Md., recently had a cyst removed from his head at Righttime’s location in nearby Gambrills. Although the restaurant manager has insurance and a regular doctor, he says, “I’ve been coming here for years because they are just so efficient.”

Urgent care center executives clearly understand that saving time is a major selling point. Righttime, for example, has a goal of getting patients in and out within an hour.

From a command center in Crofton, Md., an employee tracks all Righttime centers via cameras set up at front desks and in hallways.

A computer system monitors how long people have been waiting.

While showing a visitor around, Graw notes a monitor with a flashing bar — an alert that a patient has been at one of his centers for longer than an hour. Graw checks details and sees that the patient is having his ears cleaned. He relaxes, saying that’s “a good excuse.”

Urgent Care Centers Are Booming, Which Worries Some Doctors