When Stephen Wheeler realized he had an aching, swollen finger, he called his primary care doctor, who works for MedStar Health. The doctor referred him to PromptCare, an urgent care clinic owned by the same hospital chain and located in a strip mall in the Baltimore suburbs.

Wheeler says he probably would have ended up waiting a long time if he’d gone to the doctor. And even longer at the emergency room.

But they are all about speedy service here at the urgent care center; Wheeler got in and out in 15 minutes. There’s a timer outside of every exam room so the staff knows how long a patient has been waiting. Because Wheeler was already in the MedStar Health system, the clinic was able to pull up his electronic health records and find out if he was allergic to any medications or was due for any other care. 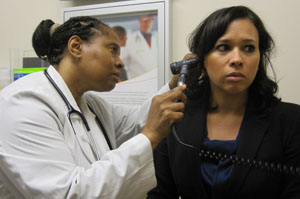 Most of the 9,000 urgent care clinics nationwide are owned by corporation or physicians, but hospital systems are increasingly aiming to get a cut of the booming industry.  Hospitals already own about 27 percent of the centers, according to the Urgent Care Association of America. Tom Charland, CEO of Merchant Medicine, a consulting firm focusing on walk-in clinics, thinks that’s just the beginning.

“We’re still in the very early stages of this trend,” said Charland. “I think we’re going to see a lot more hospitals opening urgent care centers, either their first one or you’re going to find hospitals who might have one or two opening more.”

He cautions that it’s still unclear whether hospitals will actually be successful at managing urgent care centers. Hospitals tend to be good at providing high-quality care, but they’re not always so good at customer service.

“Things like understanding how to locate an urgent care clinic in the right retail complex, keeping the wait times down, offering people to book their appointments online — hospitals have yet to prove that they can do that effectively,” he says.

Bob Gilbert, president of MedStar ambulatory services, is determined to do just that. He carefully designed the PromptCare clinic to have “a welcoming feel,” complete with a vending machine and a television in the front lobby. He made sure parking was free, and that the clinic was located in a place close to where potential patients live and work.

MedStar does not expect the new urgent care clinics to be major sources of revenue; the centers don’t tend to be big money-makers, and they can draw patients away from the hospitals’ waiting rooms. But they are valuable source of patient referrals for the hospital system.

“What we’re trying to do is use these sites really to cross-sell MedStar services,” says Gilbert. “I want to create an environment here that really says, ‘Get to our door. Come in.’ If we can’t solve your problem here in our facility, we’ll help you navigate so your problem can get solved. We’ll be a partner in your care.”

The hospital makes money for every patient the center refers to a Medstar facility for follow-up care, like a CT scan or an appointment with an orthopedist. And patients who don’t yet have a regular source of health care can be referred to a MedStar primary care doctor.

Wheeler says the clinic was “a godsend” for him. “The doctor—oh man, she got me in and out in less than, honestly, 15 minutes,” says Wheeler in disbelief.

This is the sort of interaction that  Gilbert hopes to see more of in MedStar’s urgent care future.  In the short term, the goal of the centers is to recruit new patients to the system. But in the long term, Gilbert hopes the centers will become “our vehicles for managing the health of populations.” That’s a key goal of the federal health care law.

Insurers and Medicare are starting to pay providers like MedStar to keep patients healthy, instead of just treating them when they’re sick. Providers get a bonus if they manage to lower the cost of the medical care their patients need, and urgent care centers are a much cheaper place to treat patients than the emergency room, and they’re often more convenient than a doctor’s office.

The Baltimore location is the first of seven urgent care clinics Gilbert is opening over the next year; MedStar is hoping for 15 in the next few years.